Unstoppable: Holy Angels’ Emmett Johnson is the Metro Football Player of the Year

Everyone knew the Holy Angels senior was coming — but still he ran for more than 2,500 yards and scored 42 touchdowns this season. 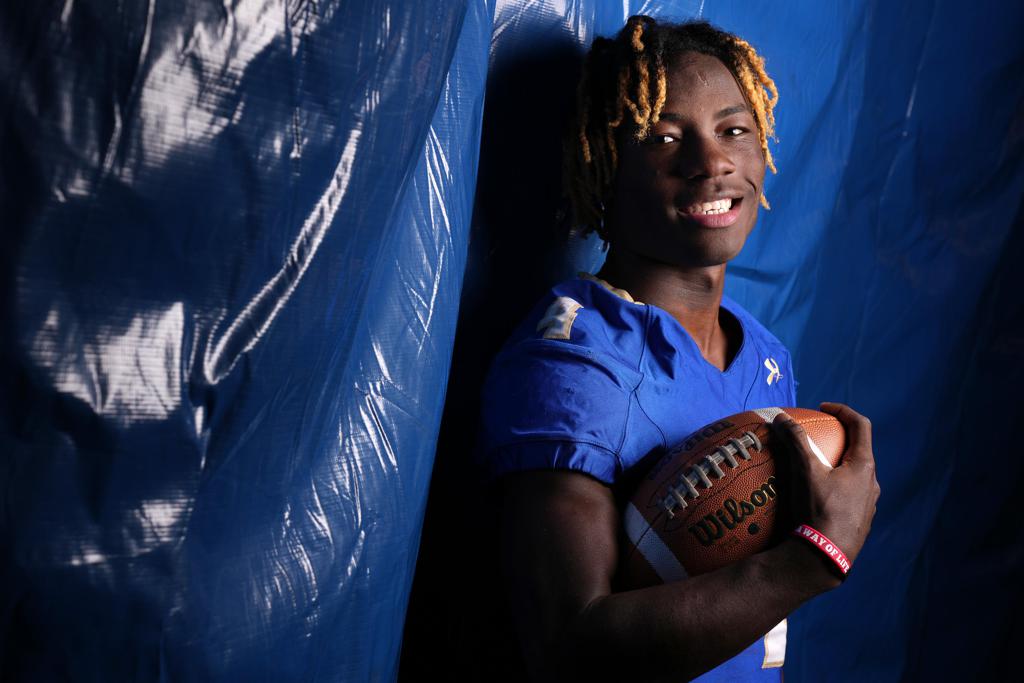 Emmett Johnson was far from unknown going into this season.

The Holy Angels senior running back already had a running start toward the elite level, having rushed for 2,213 yards and 21 touchdowns in two varsity seasons. Sprinkled throughout were enough highlight-reel runs to unnerve opposing coaches.

But this, could anyone have predicted this? This year Johnson topped his previous two seasons combined, rushing for 2,513 yards and a whopping 42 touchdowns. His ability to stop and start, change directions, explode through and run past defenders turned many of his runs into carnival rides. Opposing coaches went beyond jittery.

Johnson’s rushing numbers this season stand ninth best in state history, and he owns pretty much every rushing record at Holy Angels. All of that made Johnson an easy choice as the Star Tribune 2021 Metro Player of the Year

He’s become as close as one will find in high school football to being a household name.

“By far this was my best year, and people noticed it,” Johnson said. “We played a tougher schedule this year and, playing good competition, it made me perform at a high level.”

With Johnson’s increased profile came defenses designed to stop him, or at least slow him. Neither happened.

He topped 100 yards rushing in every game for the Stars (8-3), and 200 or more seven times, all victories. His scoring totals are equally extraordinary. He had four or more touchdowns in eight different games.

“It’s awesome, like a video game,” Holy Angels quarterback Aaron Boarman said about Johnson. “I’ll hand it off and he’ll go this way, go the other way, make a dude miss, stiff-arm a guy and he’s gone.”

With his higher profile came attention from high-profile places. Johnson points with pride to the time former Vikings linebacker Ben Leber talked about him on the radio.

“My teacher told me about it,” Johnson said. “He was talking about coming to watch this Holy Angels running back play. He came to one of my games and he was just amazed by how I played. Even a couple of days ago, when I posted my senior highlights, he said I was a great player and he couldn’t wait to come watch me at the next level.

“That was crazy, coming from him. He played in the NFL and he’s seen a lot. That was a blessing, for sure.”

Knowing his role would be expanded this season and expecting a lot of defensive attention, Johnson, 6 feet and 185 pounds, undertook a rugged offseason workout program, which he credited for his exploits this fall.

“Every team knew we were going to run the ball, and every team packed the box on me,” Johnson said. “But we were ready for it. We had a lot of options in our offense. I feel like you couldn’t do any one thing to stop our offense. Teams would know I’m getting the ball, but they still can’t stop it. My offensive coaches did a good job of getting me to the right position where I can make a good play.”

Johnson’s comments underscore perhaps his greatest value to the Stars. As dominant as he was, he never let his achievements get to his head. Try to talk to him about him, and he unfailingly steers the conversation toward his team.

“He’s a great teammate,” Holy Angels coach Jim Gunderson said. “It’s always about the team. He’ll do anything you ask him to do.”

His unteachable talents with the ball in his hands are his calling card, but being a good teammate drives him. That’s evident in his success on defense. He takes pride in his play at safety, where he made 85 tackles, many of the hard-nosed variety.

“That’s a part of my game I wanted to improve,” he said.

Next up is making a decision on where he’ll play next. He’s received a lot of Division I interest — “Every day, there’s a new coach calling or texting me,” he said — but has yet to make a choice. He said the Gophers had shown interest but had yet to make an offer.

“Playing at home would be nice, but how far away I have to go doesn’t matter,” he said. “I just want to go wherever fits me best.”