See who fans voted as the top performer from Sept. 5-6. 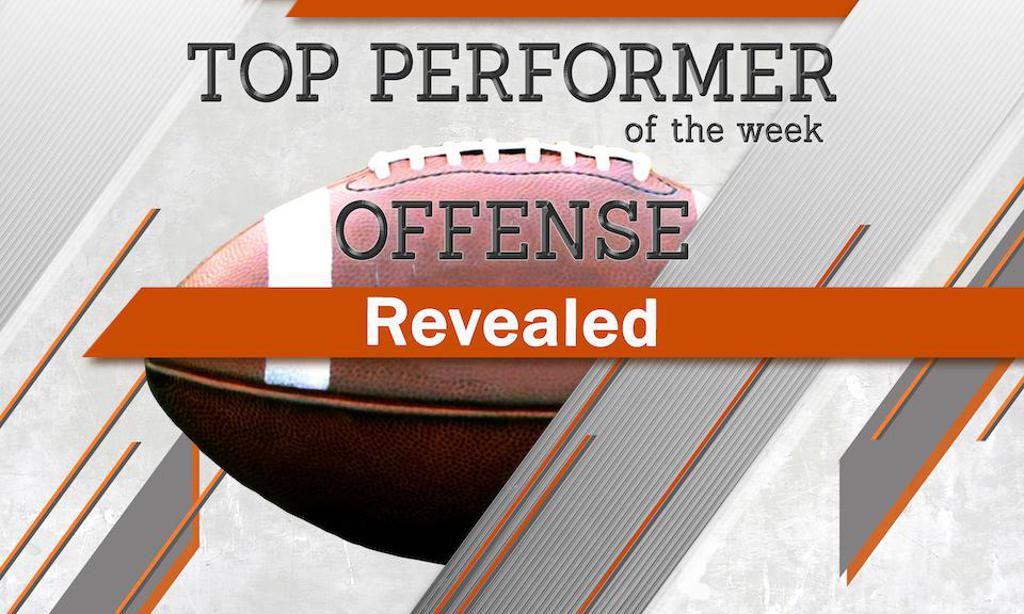 Nick Drinken, Randolph. During the Rockets’ 39-19 win against Hayfield, the senior quarterback had 398 passing yards and five touchdowns — more than doubling his passing yards from the Week 1. Drinken completed 19 passes in the win.

Aidan Bouman, Buffalo. Judging by last year’s 80-70 game between Buffalo and Elk River, it was no surprise that this year’s rematch would also be high scoring. Though the Bison lost to the Elks again, this time 46-37, Bouman, a senior quarterback, nearly eclipsed 400 yards in the game. Bouman had 385 passing yards and threw two touchdowns — including two of more than 50 yards in the third quarter. Bouman also successfully connected with receivers on three two-point conversions.

Andy Chesak, Austin. The senior running back led the Packers offense in a 34-28 win against Mankato East, accumulating 280 rushing yards and scoring all five touchdowns. Chesak's longest touchdown was a 53-yard run midway through the second quarter. He had 25 carries, averaging 11.2 yards per carry.

Nick Drinken, Randolph. During the Rockets’ 39-19 win against Hayfield, the senior quarterback had 398 passing yards and five touchdowns — more than doubling his passing yards from the Week 1. Drinken completed 19 passes in the win.

Aaron Ellingson, St. Louis Park. Ellingson led the Orioles to a 27-17 win over Waconia with impressive performances on both sides of the ball, but he really shined on offense. The senior quarterback completed 20 passes for 199 yards and a touchdown, and he added 53 yards and two more touchdowns on the ground.

Carter Hanson, Bloomington Jefferson. After trading leads three different times during the game, Hanson's Jaguars defeated Apple Valley 25-24 in overtime. Hanson got the Jaguars’ scoring started, receiving a pass for a 6-yard touchdown. After the Eagles scored in OT and took back the lead, Hanson completed a 4-yard pass before converting a two-point conversion to secure the win. The junior quarterback finished the game with 195 passing yards on 15 completions.

Noah King, Caledonia. The senior quarterback accumulated nearly 300 total yards in a 42-7 win against St. Charles. He threw for 247 yards and four touchdowns – the longest being 57 yards – and added 33 rushing yards.

Trenton Matthies, Cannon Falls. The senior running back had his second three-touchdown game this  season, this one in a 35-20 win against Pine Island. Matthies rushed for 231 yards on 14 carries – averaging 16.5 yards per carry – and had one reception for 37 yards.

Joe Nordstrom, Elk River. Following up on the history-making 80-70 win against Buffalo last year, the senior running back led the Elks to another high-scoring win against the Bison. Nordstrom carried the ball 21 times for 329 yards – averaging 15.7 yards per carry – and four touchdowns. Nordstrom’s touchdowns first three touchdowns were carries of 80, 79 and 34 yards.

Preston Thelemann, Cretin-Derham Hall. The senior quarterback led the Raiders in a 24-14 victory ove East Ridge, completing 21 of 26 passes and tallying 299 passing yards. Thelemann threw two touchdowns, each of which were more than 50 yards, and finished with 46 rushing yards.

*Stats and records as of Sept. 8