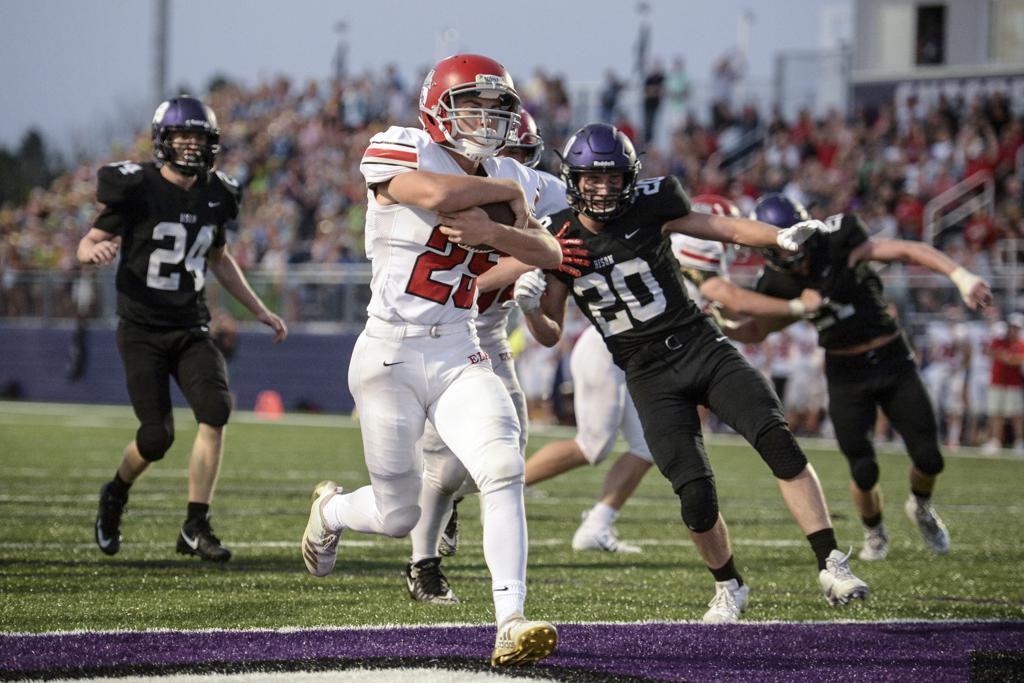 Elk River running back Carter Otto, part of the incredible offensive explosion in the 80-70 game with Buffalo. [AARON LAVINSKY aaron.lavinsky@startribune.com]

In a season full of memories, the Star Tribune’s Jim Paulsen and David La Vaque share a few that touched them while covering football from late August to November.

The night Maple Grove senior running back Evan Hull turned 18, he ran for 302 yards and three touchdowns against White Bear Lake. Afterward he abided by the team’s birthday tradition, holding a football with both hands above his head and staring at the pigskin as he spun. Hull darted and dodged through defenses all season, producing 1,915 rushing yards and 19 touchdowns. But there was no escaping the surrounding crowd of teammates and friends who cheered as Hull completed 18 dizzying turns, then punted the ball away. He didn’t mind.

Unofficially the longest football playoff game in Minnesota history, a Nov. 9 tilt between Blaine and Eastview stretched from Thursday evening into Friday afternoon because of a blackout at White Bear Lake Stadium. Some stadium lights went out about 8:15 p.m. Within a few minutes all of the stanchion lights were out, along with the scoreboard lights. Two open-flame heaters on the Blaine sideline provided the last remaining light. An electrical fire within the high school caused the short. The teams resumed Friday at Osseo High School and Blaine completed its victory.

Lakeville South and Woodbury played the nightcap at Osseo, and the Cougars, who entered the game with a .500 record, upset the top seed Royals to earn a trip to U.S. Bank Stadium. Afterward, there was shared warmth on that chilly November night. A sympathetic Lakeville South fan encouraged and repeatedly patted a disappointed Woodbury football player on the back as they left the field. The player, in turn, thanked the Woodbury cheerleaders lining each side of the open gate for their support.

At first it was a novelty. Then it became a head-shaker. Finally, Elk River’s epic 80-70 victory over Buffalo crossed into never-forget-it territory. What made the spectacle so special was the level of execution by both offenses in the highest-scoring game in state high school football history. The Elks ran their power-T offense to perfection, racking up 636 yards on the ground. They didn’t complete a pass, and attempted just two. Three Elks rushed for more than 100 yards: Adam Nelson (268), Arik Nordenstrom (108) and Carter Otto (100). Buffalo, behind quarterback Aidan Bouman, outgained Elk River 711-636. Bouman completed 40 of 55 passes for 555 yards and eight touchdowns. The difference was that one Buffalo drive ended in a punt, allowing Elk River to bunch scores together to outpace the Bison. After the game, fans of both teams milled about on the Buffalo field, reliving what they just saw.

Snowflakes flurried around Eden Prairie coach Mike Grant’s head after the Eagles’ playoff victory over Minnetonka on Nov. 8. Talk turned to some of those close to Grant who had died in the past year. His brother, Bruce. Former Eden Prairie assistants Lyle Schuette and Tim Kasprowicz. John Gagliardi. Former Vikings trainer Fred Zamberletti. His upper lip began to quiver. Tears welled in his eyes. Usually perceived as a shrewd coach in charge of the metro’s most successful football program, Grant and his human side were on full display. “Our kids, they don’t think about getting to U.S. Bank Stadium,” he said. “It’s about us getting to be together for one more week. I’ve known so many of these kids since third or fourth grade. If we can get to the last practice of the year, on Thanksgiving, then everything else is gravy.”

It was just one pass and it fell incomplete. But what a throw. A light rain fell in the third quarter of the playoff game between SMB and Orono. Pressured by the Orono defense, SMB quarterback Jalen Suggs escaped the pocket and rolled right. Standing near his own 10-yard line, he spotted receiver Craig McDonald sprinting 40 yards away downfield. McDonald was still moving away when Suggs uncorked a missile. It landed 5 yards beyond McDonald’s outstretched hands, having traveled some 70 yards. An example of the amazing abilities of one of Minnesota’s most sought-after athletes.