Panthers defense responds to wake-up call in second half

Lakeville North tapped into its experience to reclaim an edge with the Class 6A Prep Bowl on the line. 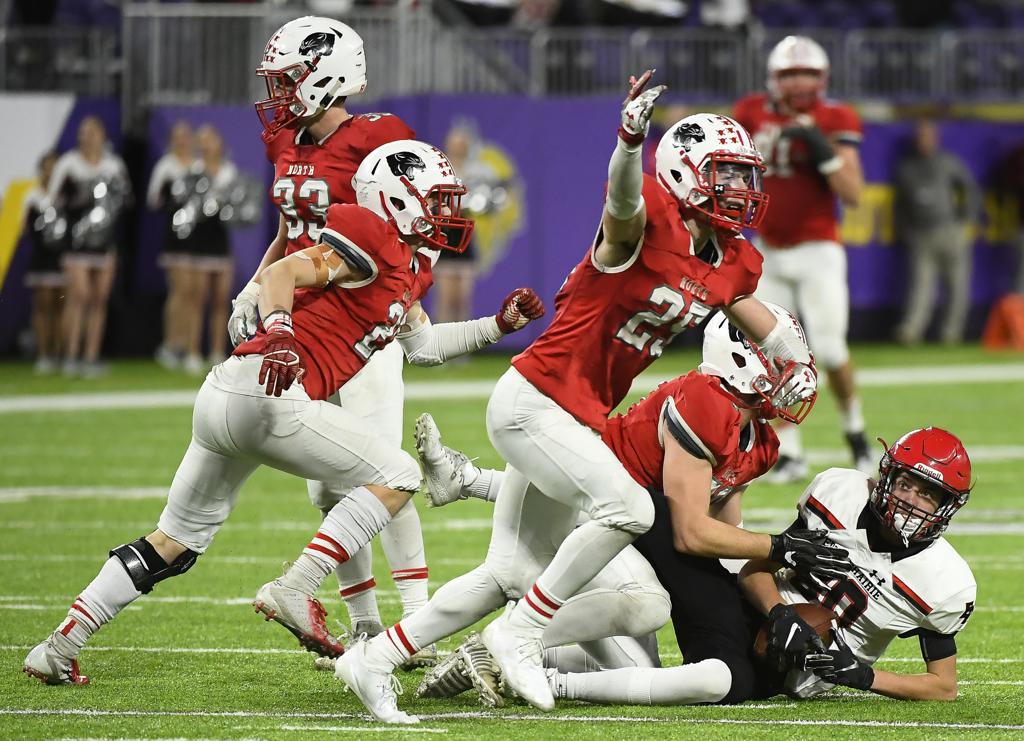 The unit pitched a shutout of the Eagles in Week 2 but was gashed early in the rematch for touchdowns of 49 and 80 yards.

Worse, none of the adjustments seemed to work.

“We kind of got into a panic situation,” Panthers coach Brian Vossen said. “I was in it, too.”

Flustered for a few moments, Vossen gathered himself and coaxed players into doing likewise.

“More than anything it was calming people down and letting them know we’re at 0-0 when it’s 21-21,” Vossen said. We said, ‘We’re in the same position we were the first time we played them. If we just do our jobs, we’re going to walk away with this thing.’”

Lakeville North’s defensive front four bore down in the second half and stymied Eden Prairie in a 28-21 victory.

Landon Carter, Preston Palmer and the dominant Mostaert twins, Eli and Will, led the assault. In the second half, Eden Prairie managed just 3 rushing yards and 47 passing yards. And most importantly, zero points.

Eagles quarterback Cole Kramer couldn’t get a moment’s peace unless he was handling his punting duties. He punted once in the first half and five times in the second.

“They rushed things up, for sure,” said Kramer, who has committed to the Gophers. “I was rushed a little more than I like.”

The front four combined for 21 tackles, including five for loss and two sacks.

“This group completely changed the way I call defense,” Vossen said. “I put all my trust in Matt Kuenzli, my defensive line coach. And if you’d of told me five years ago I’d trust Kuenzli making any type of call during the game, I might have laughed at you and he knows that. But he studied hard and understands these guys in terms of who should go first or second.”

In the end, the Panthers’ defense had to make one final stop. The Eagles got the ball on the Lakeville North 35-yard line with 1:21 to play but couldn't muster a first down.