Williamson powers Owatonna past St. Thomas Academy to another 5A title

Gopher recruit Jason Williamson scored touchdowns on runs of 71 and 44 yards in the second half to lead the Huskies to a 14-3 victory. 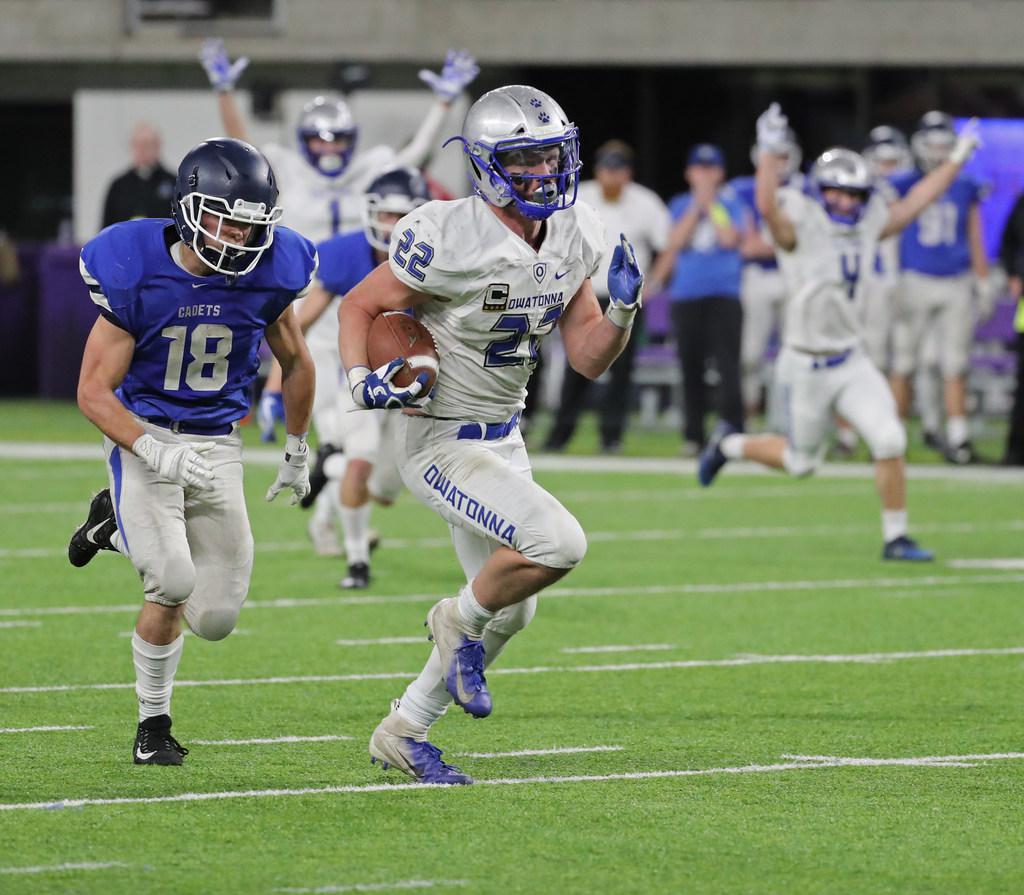 Jason Williamson wasn’t worried. There was no frustration in the mind of Owatonna’s superstar halfback, despite having little room to run for the entire first half. Something would open up.

It did, early in the third quarter. Trailing by a field goal, Williamson, a senior, took a toss left, side-stepped one tackler, shed two others and raced 71 yards into the end zone, propelling Owatonna to a 14-3 victory over St. Thomas Academy in the Class 5A championship game.

It was the second consecutive state title for Owatonna (13-0) and third since 2013.

“Our running back coach was saying at halftime that I was going to get a big one,” Williamson said. “I just trusted that.”

Prior to his long run, Williamson, a Gopher recruit, had been bottled up by a stubborn St. Thomas Academy defense in the first half Saturday at U.S. Bank Stadium, putting up just 38 yards rushing.

He’d seen this before, however. Teams were always scheming to stop him. Thing is, not one had done it yet.

“I don’t get frustrated,” he said. “All the teams game plan for me. I trusted I was going to break one.”

Watching the back of Williamson’s jersey as he pulls away from defenders is a thing of beauty, quarterback Solomon Havelka said.

“Just watching him do it, it’s fun to be back there,” Havelka said. You think he’s down and then he’s not. It gives us all the momentum in the world. It’s a relief to have a guy like that back there.”

It was something that concerned St. Thomas Academy coach Dan O’Brien at halftime.

“I said ‘Hey, he only needs one. If he gets a seam, he’s going to be gone.’ ” O’Brien said. “Sure enough, that’s what happened in the third quarter.”

“We have a lot of confidence in our defense,” Owatonna coach Jeff Williams said. “There’s been a lot of talk this year about teams we have faced that have great defenses. Few people were talking about ours. Hopefully they will now.”

St. Thomas Academy got a field goal on its first possession of the game. The Huskies defense stymied the Cadets after that. They surrendered just 139 yards of total offense, 105 of them from McFadden. They harassed quarterback Charlie Fafinski, who had passed for 197 yards in the semifinals, with four sacks, giving up 60 yards in the air.

St. Thomas Academy had a chance to regain the lead in the fourth quarter. The Cadets drove to the Owatonna 6-yard line, but Fafinski’s fourth-down pass sailed over his receiver in the back of the end zone.

Williamson put a cap on the victory a few minutes later. The Huskies regained the ball at midfield after a McFadden fumble. With the Cadets selling out to get the ball back, Williamson slipped through the line and raced in from 44 yards for a touchdown.

Williamson finished with 184 yards on 23 carries in his final high school game.

“This one is going to be a hard one to replace,” Williams said, patting Williamson’s shoulder.

It wasn’t vintage Jason Williamson, but it didn’t have to be. Owatonna’s superstar running back was bottled up for most of the game, but broke loose two times, which proved to be enough in the Huskies’ 14-3 victory over St. Thomas Academy in the Class 5A championship game.

Owatonna trailed 3-0 at halftime, but Williamson remedied that with a 71-yard touchdown run in the third quarter for a 7-3 lead. He shed three tacklers and side-stepped another on the run, showing the ability that makes him a University of Minnesota recruit.

With St. Thomas overcommitting on defense, Williamson slipped through the line for a 44-yard TD to ice the victory. He finished with 184 yards rushing.