In his first year with the Cadets, former Gophers coach and administrator Dan O’Brien has the team, led by hard-running Brendan McFadden, in position to win its first football state title since 1975 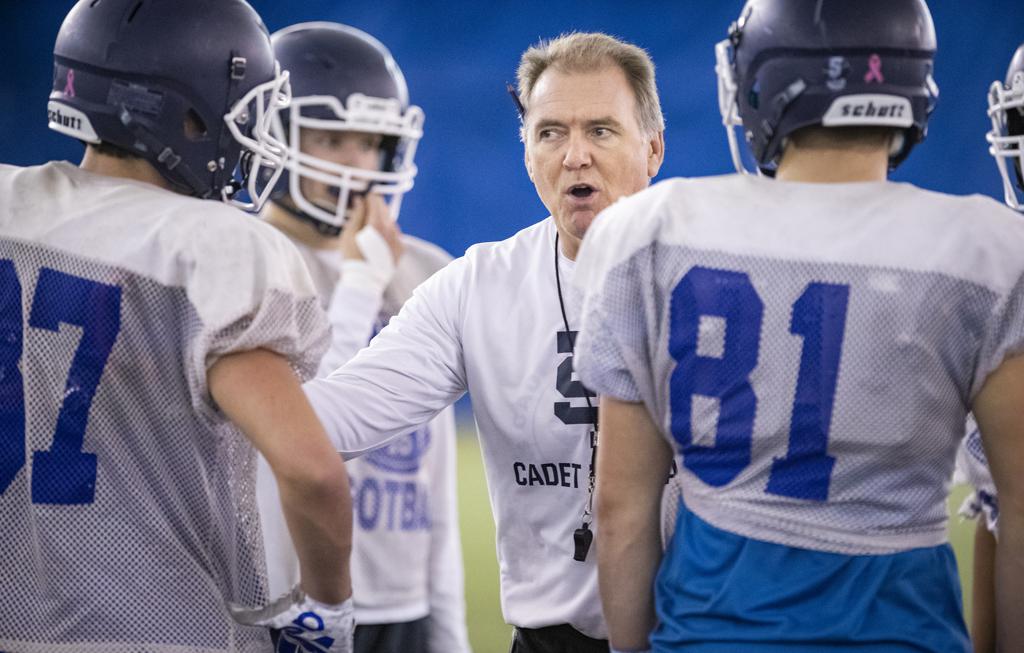 “Hey, the Epsom salt is old school,” O’Brien said with a smile.

On-field results show no reason to doubt O’Brien, a former Gophers coach and administrator in his first season with the Cadets. A powerful ground game backed by an aggressive, stifling defense produced a 12-0 record heading into their first Prep Bowl appearance in three seasons. They face defending champion Owatonna at 4 p.m. Saturday in the Class 5A title game.

A victory would bring the Mendota Heights school its first football championship since 1975.

“We wanted to get back to the way he thinks St. Thomas should play football,” senior running back Brendan McFadden said. “Hard-nosed, pound the rock and a good defense. I think old school fits that perfectly.”

McFadden’s role as offensive catalyst speaks to the retro approach of O’Brien, 55, who brings three decades of experience in the Twin Cities as a high school and college football coach and college sports administrator.

A budding star at running back as a sophomore with 756 yards and nine touchdowns, McFadden moved to linebacker as a junior last season. He accepted the switch and earned all-district honors.

But when O’Brien took the Cadets job in late April, he watched game clips and decided within weeks that the 6-1, 210-pound McFadden should return to the backfield.

“I was excited to hear that and get back on the offensive side of the ball, especially with the type of offense I knew we’d be running,” McFadden said.

He started the season well enough but learned how to be better through watching game footage.

“He left a lot of yards on the field by cutting wrong on a block,” said Dave Ziebarth, in his second season as an assistant after stepping down as the Cadets’ head coach in 2015. “He’s improved the most out of any senior running back in a year. Against Bemidji, he made all the right cuts.”

McFadden ran for a season-high 211 yards in last week’s semifinal victory against Bemidji, the program O’Brien coached from 1993-95 before heading to the collegiate ranks at Concordia (St. Paul). He later moved to Hamline, where he was athletic director, before joining the Gophers and serving in a variety of roles.

“That year off — you can’t just all of a sudden be a running back again,” O’Brien said. “So it took a while. But he’s a perfect I-formation tailback. He can run. He’s durable. And he’s getting better every game. He had a couple jump cuts that were unbelievable against Bemidji.”

“We have a great coaching staff, and I’ve learned a lot,” said McFadden, who also credited his monster season to his offensive line and fullback Jack Nozel.

Running back is where older brothers Pat and Sean McFadden previously shined. With 1,714 rushing yards and a program-record 36 touchdowns, Brendan has eclipsed his siblings.

“They said, ‘We’re cheering for you,’ but they know if we get the win, then I’ll have one-upped them,” said Brendan, whose younger brother Danny is a sophomore running back. “It’s kind of the joke in the family right now.”

Winning St. Thomas Academy’s first football state championship in 43 years, however, is a mission McFadden takes seriously. Rushing yards and touchdowns aren’t the only ways in which he leads.

McFadden is the most dramatic example of O’Brien making all the right moves. He beefed up the scrimmage schedule, and the team learned hard lessons against Class 6A programs Cretin-Derham Hall, Minnetonka and Totino-Grace.

“We kind of got our butts kicked, but we knew we had a little fight in us,” McFadden said.

By midseason, the Cadets were trading moral victories for the real thing against Mahtomedi and Hastings. Through it all, O’Brien’s constant engagement with players and his philosophy elevated the entire program.

“The less they have to think about things, the faster they play, the more successful they are and the more fun they have,” said O’Brien, the defensive coordinator for Lakeville’s 1992 Prep Bowl championship team. “That’s what our job is as coaches, to get kids feeling good about themselves, and you could feel the good juice, the good energy.”