The prized recruit in football and basketball dazzled with his running and passing in a 44-18 victory. 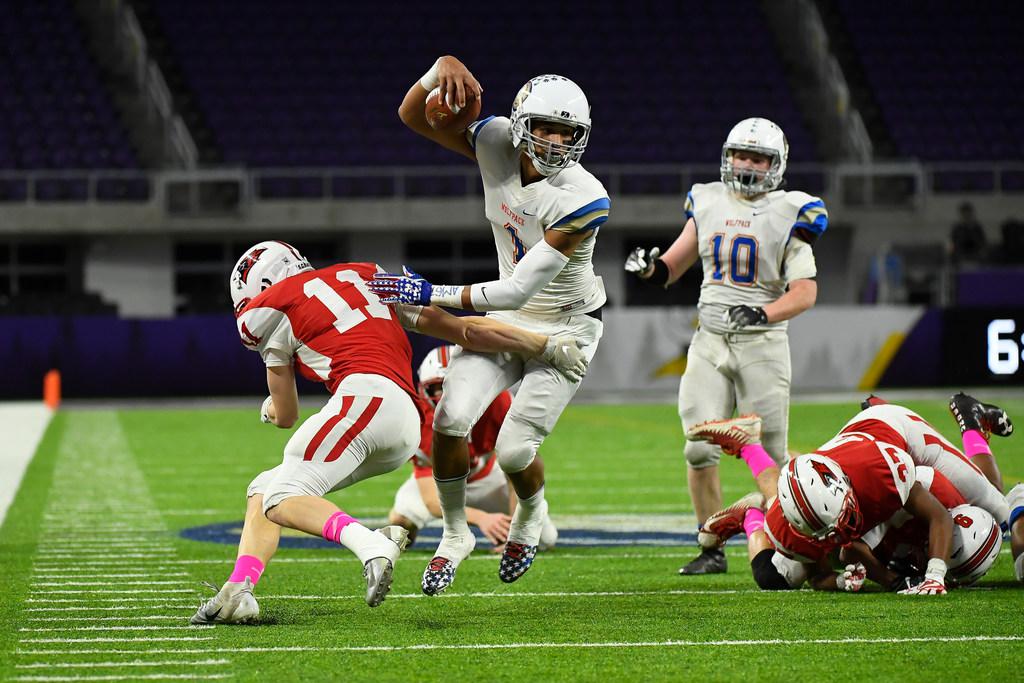 SMB Wolfpack quarterback Jalen Suggs (1) juked past a tackle attempt by Willmar's Ty Roelofs (11) for a first down in the first quarter on Friday. Photo: Aaron Lavinsky ¥ aaron.lavinsky@startribune.com

Jalen Suggs is the kid picked first on the playground, the neighborhood kid who dominates every backyard game, the kid who makes fans out of teammates.
Suggs, a junior at Minnehaha Academy and a nationally sought recruit in football and basketball, made the Class 4A Prep Bowl a showcase for his athletic talents.

Whether at quarterback or cornerback, Suggs propelled SMB to a 44-18 victory against Willmar on Friday at U.S. Bank Stadium.

SMB, a co-op of players from St. Paul Academy, Minnehaha Academy and Blake formed in 2015, completed a 13-0 season and won the combined program’s first state title.

Suggs dazzled on a trio of touchdowns: A 23-yard run during which six Willmar defenders missed tackles, a 97-yard interception return and a 76-yard pass.

“He made some incredible plays,” Willmar senior quarterback Drey Dirksen said. “He had the night.”

Willmar (11-2) had the game’s first electrifying play as Ethan Roux dashed 90 yards untouched for a touchdown, trimming the deficit to 10-6 in the opening quarter.

Then Suggs answered with his own magnificent effort. He dipped, dodged and whirled past befuddled defenders on a 23-yard touchdown run to put SMB ahead 17-6 early in the second quarter.

“That was just instinctual, playing and having fun on the field,” Suggs said.

Skill rivaled instinct as SMB closed out the first half with a 95-yard touchdown drive. The final play featured Suggs throwing to the far corner of the end zone while jumping off his back foot and placing the ball for only Kaden Johnson to catch. The 6-yard touchdown made it 24-12 Wolfpack at halftime.

Willmar drove into SMB territory midway through the third quarter when Suggs intercepted a fourth down pass and ran 97 yards for a touchdown.

“I just know that got me tired,” Suggs said with a smile.
Collin Quinn credited Suggs, who missed the first three game of the season while recovering from a knee injury, for staying engaged with teammates at practice.

On Friday Suggs picked up his boys with repeated big plays.

“You just shake your head; it was incredible,” Quinn said. “I know he’s a tremendous basketball player but I think he’s just as good of a football player to be totally honest.”

Jalen Suggs, a junior at Minnehaha Academy and a nationally sought recruit in football and basketball, made the Class 4A Prep Bowl a showcase for his superb athletic talents.

Suggs powered the SMB Wolfpack to a 44-18 victory against Willmar on Friday at U.S. Bank Stadium.

Suggs, the Wolfpack’s quarterback and a cornerback, dazzled spectators on a trio of touchdowns: A 23-yard run in which six Willmar defenders missed tackles, a 97-yard interception return and a 76-yard pass.

Willmar (11-2) enjoyed a few big plays, too. Ethan Roux dashed 90 yards untouched for a touchdown as the Cardinals trimmed their deficit to 10-6.

But SMB made plays in bulk and Willmar couldn’t keep pace.