The Cadets’ Brendan McFadden scored on two long touchdown runs in the third quarter to break open a tight game en route to a 33-21 victory. 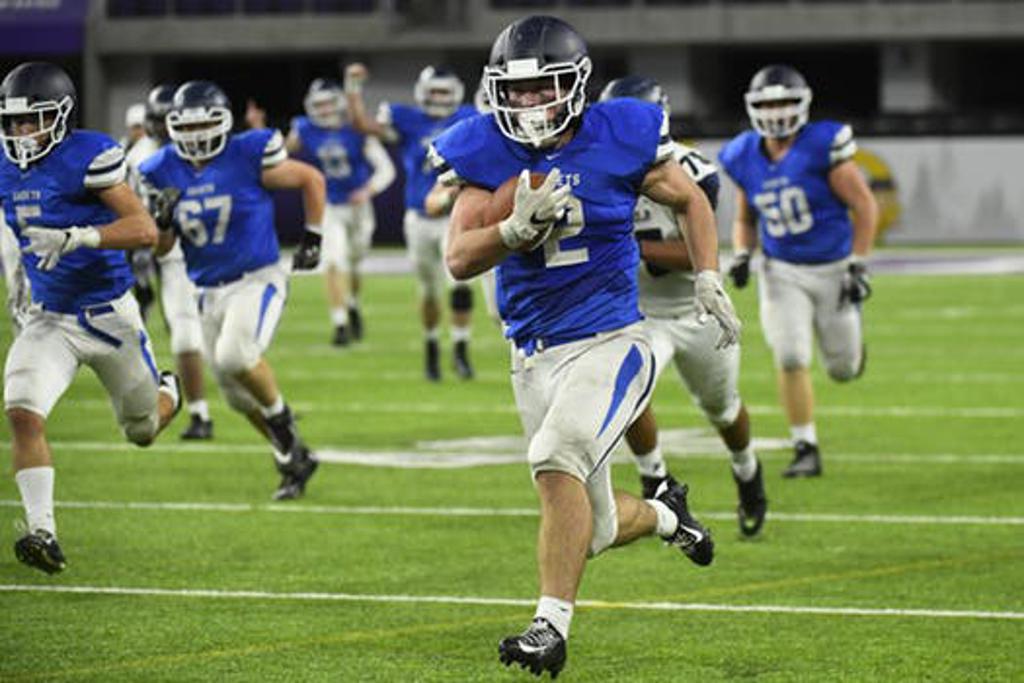 St. Thomas Academy running back Brendan McFadden padded his program record for touchdowns in a season as the Cadets dispatched Bemidji 33-21 on Saturday in the Class 5A semifinals.

Touchdowns No. 35, 36 and 37 for McFadden helped the Cadets advance to face defending state champion and top-ranked Owatonna in the Prep Bowl at 4 p.m. Saturday at U.S. Bank Stadium.

McFadden, a senior, finished with 216 yards rushing for No. 2-ranked St. Thomas Academy (12-0), highlighted by touchdown runs of 32 and 71 yards in the third quarter.

“He’s been fantastic for us all year long,” said first-year Cadets coach Dan O’Brien, a longtime Gophers assistant. “Our entire offense runs through Brendan McFadden. Teams loaded up the box on him all year long, and he still found ways to get his yards.”

Run-heavy St. Thomas Academy led 13-7 at halftime thanks to a screen pass to tight end Thomas Odegard. He picked up 43 yards to the Bemidji 9-yard line. McFadden later scored on a short fourth-down run and added the two-point conversion.

The touchdown late in the first half came after No. 5-ranked Bemidji (10-2) squandered a chance to build a bigger lead and exert pressure.

“That was a momentum opportunity for us, and to get no points was frustrating,” Hendricks said.

The St. Thomas Academy special teams keyed the team’s initial 5-0 lead. John Copeland nailed a 28-yard field goal. The Cadets’ next possession ended with a Ben Reppenhagen punt to the Lumberjacks 5-yard line.
Pinned down, Bemidji quarterback Jacob Beberg was sacked in the end zone for a safety by Peter Holmes and Garrison Solliday.

Bemidji’s fortunes briefly changed as McFadden fumbled and the Lumberjacks took over at the Cadets’ 29-yard line. The Lumberjacks converted on fourth-and-9 to the 16-yard line. Three plays later, Beberg hit Kade Peterson for a touchdown and a 7-5 lead.