3A: Fairmont pulls away from Perham in 29-14 victory 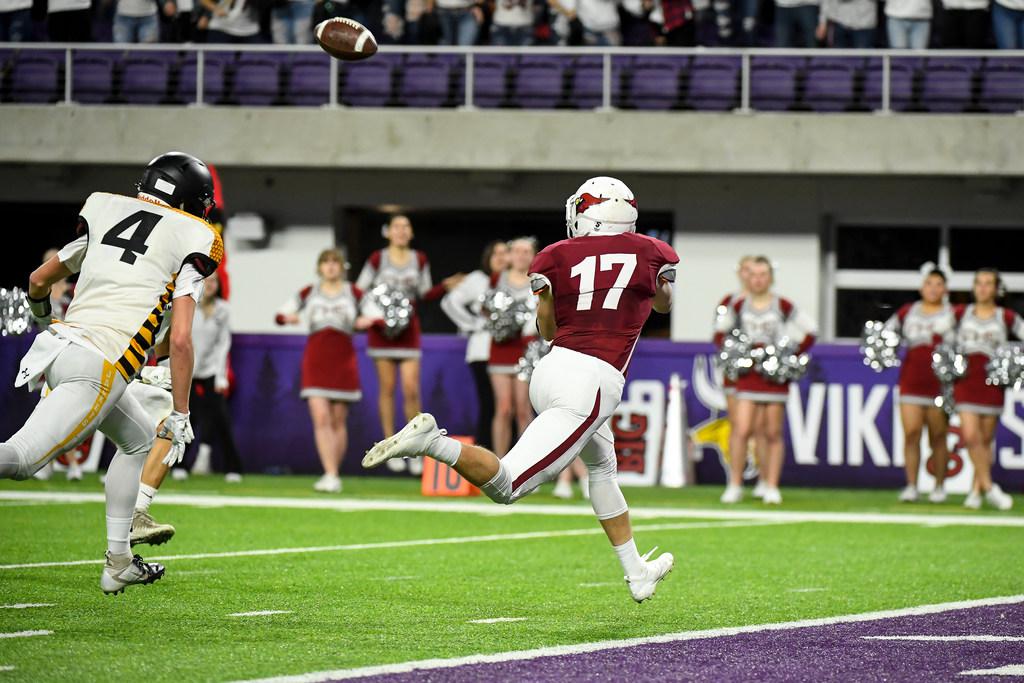 This was much more to Fairmont’s liking.

The Cardinal’s six-point victory over Cannon Falls in the snow and cold of the Class 3A quarterfinals last week was more of a chore than they liked.

Out of the elements and operating on fast turf, Fairmont relaxed and play its style in defeating Perham 29-14 on Saturday in a 3A semifinal at U.S. Bank Stadium.

Perham drove 69 yards on its opening possession and scored on Ty Moser’s 3-yard dive to take a 6-0 lead.

Fairmont struck back quickly, scoring on a 32-yard, fourth-down pass from quarterback Garrett Myren to wide receiver Dustin Schultz. The duo had narrowly failed to connect on a similar route one play before, but Myren denied repeating the play deliberately.

Leading 8-6, Fairmont stiffened on defense shutting down Perham running lanes and tormenting Yellowjackets quarterback Jensen Beachy when he was looking to pass.

The Cardinals increased their lead on their next possession after a 58-yard pass from Myren to running back Jordan Wolter put them deep into Perham territory. Three plays later, another Myren to Schultz hooked up again, this time for an 11-yard touchdown and a 15-6 lead into halftime.

In the third quarter, the Cardinals scored twice in a span of just over four minutes. A 74-yard touchdown run by Wolter was followed by a 39-yard interception return by cornerback Daniel Reiter to take a commanding 29-6 lead.

Perham added a touchdown in the fourth quarter to cut the deficit to 29-14.

Although too young to remember much, Myren said the 2011 team — the only other Fairmont team to play in a Prep Bowl (it lost to St. Croix Lutheran) — was a standard the Cardinals strived to reach.

After a one-loss regular season and riding an eight-game winning streak, Fairmont’s six-point victory over Cannon Falls in the Class 3A quarterfinals was a little closer than the Cardinals liked.

For most of their semifinal game against Perham on Saturday, the Cardinals breathed more freely.

Fairmont spotted Perham a quick lead, then scored 29 unanswered points and pulled away from the Yellowjackets for a 29-14 victory.

Fairmont (11-1) qualified for its second Prep Bowl in team history. The Cardinals lost to St. Croix Lutheran in the Class 3A final in 2011.

Perham struck first. The Yellowjackets drove 69 yards in 11 plays on their opening possession and took the lead on Ty Moser’s 3-yard dive. The two-point conversion failed.

Fairmont struck back quickly, scoring on a 32-yard pass from quarterback Garrett Myren to 6-4 wide receiver Dustin Schultz. A pass from Myren to Tony Nuss tacked on a two-point conversion, giving Fairmont an 8-6 lead.

A 58-yard pass from Myren to running back Jordan Wolter put Fairmont deep into Perham territory on its next drive. Three plays later, Myren hooked up with Schultz again, this time for an 11-yard touchdown and a 15-6 lead Fairmont carried into halftime.

Fairmont maintained its momentum in the second half. On the first play of the Cardinals’ second possession, Wolter darted up the middle and raced 76 yards untouched into the Perham end zone for a 22-6 lead.

Barely four minutes later, they boosted that margin to 29-6 when defensive back Daniel Reiter undercut a Perham receiver at the Yellowjackets 39-yard line, picked off a Beachy pass and returned it for a touchdown.

Perham added a touchdown to cut the deficit to 29-14, but couldn’t get any closer.

Check back later for an updated story.