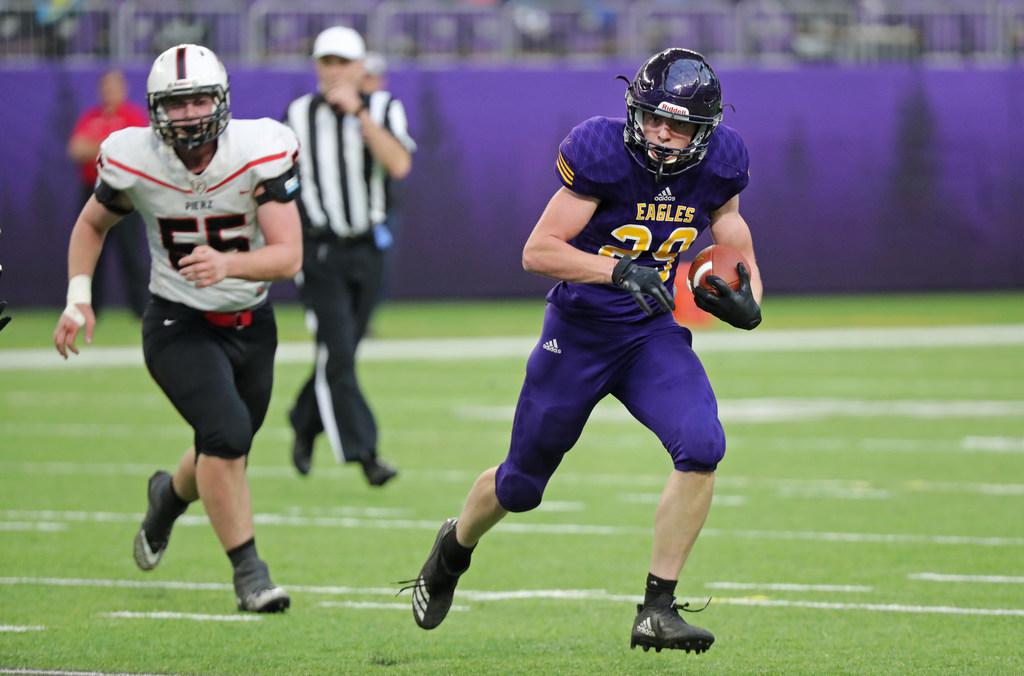 Rochester Lourdes running back Zach Jungels (29) ran with the ball in the first half while being chased by Pierz's Zachary Trout. Photo: Shari L. Gross • shari.gross@startribune.com

Rochester Lourdes’ football coaches felt something missing even as the Eagles built an undefeated record this season.

“To be honest, we haven’t had much adversity this year,” coach Mike Kesler said. “We always kind of wondered how that was going to be handled.”

The Class 3A semifinal against defending champion and top-ranked Pierz on Saturday provided a proving ground. The Eagles (2014, 2016) and the Pioneers (2015, 2017) have split the past four state championships.

Lourdes endured the game’s tension and momentum swings with a 25-20 victory. The second-ranked Eagles snapped Pierz’s 24-game winning streak and advance to the Prep Bowl at 1 p.m. next Saturday.

“The guys stepped up today and had that next-play mindset,” Kesler said.

“That shows we’re able to overcome adversity and not get our heads down,” said senior linebacker Jake Groteboer, who recorded a game-high five tackles for loss.

When the Pierz defense subjected Eagles’ running back Zach Jungels to what he called “probably the most physical game I’ve played in,” he dug deep and ran for 109 yards and a touchdown.

And when Eagles quarterback Matthew Hayford threw a fourth-quarter interception with his team leading 18-14, he ended the ensuing Pierz drive with an interception of his own. His 46-yard return to the Pierz 47-yard line set up the decisive scoring drive.

“You’ve got to stay together through those hard times and you’ll end up making that play,” Hayford said.

Pierz (11-1) lamented missed opportunities, starting with a touchdown return on the game’s opening kickoff that was called back by a penalty. The Pioneers’ fumbled its second possession at Lourdes’ 12-yard line.

“It was a great game between two very good teams,” Pierz coach Leo Pohlkamp said. “You play this whole game over and it’s probably going to be close again.”

Rochester Lourdes dethroned defending champion Pierz with a 25-20 victory on Saturday in the Class 3A semifinals at U.S. Bank Stadium.

Defense made the difference as Lourdes (13-0) held the Pioneers (11-1) well below their previous season-low of 32 points scored.

Lourdes went ahead 7-0 on a Zach Jungels run. Then Pierz used a touchdown from Carlson Huls and two-point conversion to go ahead 8-7.

Back came Lourdes. A Jake Groteboer run and a two-point conversion allowed the Eagles’ re-take the lead at 15-8.

Pierz scored next on a Reese Kapsner run but the two-point conversion failed and Lourdes maintained a 15-14 halftime lead.