The Panthers, trailing 7-0 after one quarter, asserted physical control to put away the upstart Cougars with a 35-13 victory and earn a Class 6A Prep Bowl berth against perennial power Eden Prairie. 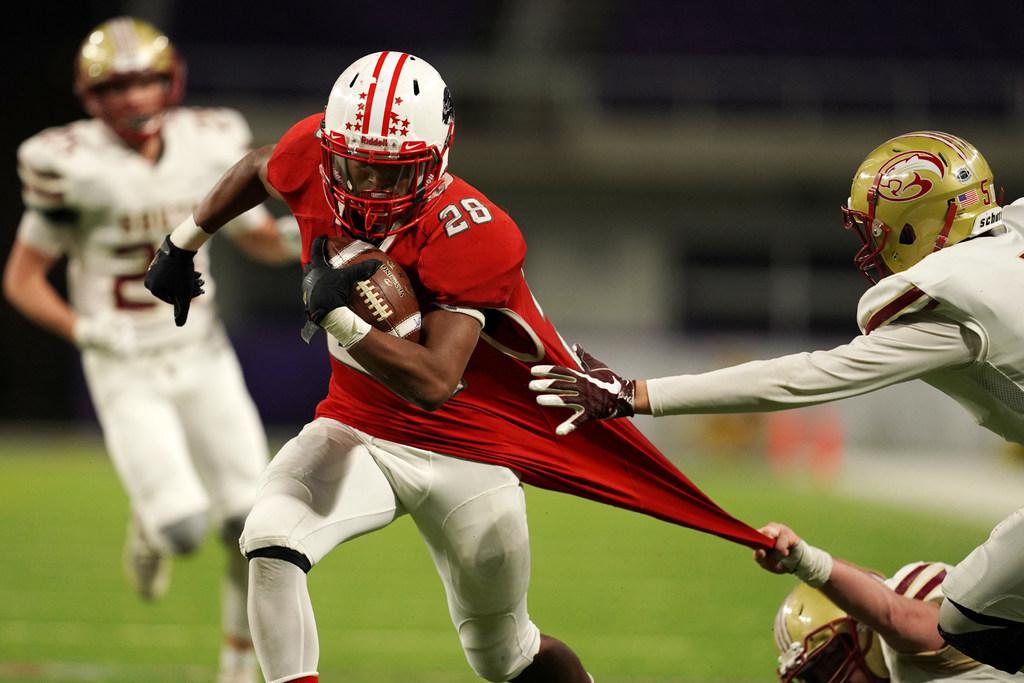 Lakeville North running back Brian Curtis Jr. (28) was held up by his jersey as he ran toward the end zone in the first half. Photo: ANTHONY SOUFFLE • anthony.souffle@startribune.com

It started with Brian Curtis Jr. and veered into Raja Nelson. Together, Lakeville North’s two stellar running backs lifted the Panthers to a 35-13 victory over Lakeville South on Friday in the Class 6A semifinals and into next Friday’s Prep Bowl.

Running behind a big and physical offensive line, they took turns gashing Lakeville South and slowly siphoning the life out of the upstart Cougars, whose late-season surge came to a halt.

Curtis, a senior who balances power and shiftiness, rushed for 214 yards on 25 carries, getting better with each run. Nelson, a junior, used his slashing, big-play style to gain 174 yards. Curtis scored one touchdown, Nelson had three.

“We feed off each other,” Nelson said. “Brian gets a big run, then I know it’s my turn.

The first half followed a pattern that Lakeville North coach Brian Vossen predicted. Knowing that possessions would be few, owing to both teams’ proclivity towards running the football, he wanted to make the most of each one. He even thought his team might have to weather an early blow from the Cougars.

After North went three-and-out on its opening drive, South moved crisply downfield and took a 7-0 lead on a 31-yard run by Johnny Shabaz.

“We felt if Lakeville South was going to have success, it was going to be early,” Vossen said. “We just had to stay the course.”

The teams traded punts before Lakeville North found its footing. The Panthers went 83 yards on 14 plays, deftly mixing runs by Curtis and Nelson, ending in a 13-yard sweep for a score by Nelson.

Lakeville North (12-0) added to its lead late in the first half. Starting with 2:34 left in the half and the ball at its own 24-yard line, eight runs by Nelson, with a couple of Curtis carries sprinkled in, led the Panthers to the Cougars 4-yard line. Quarterback Brennan Kuebler capped the drive with a bootleg around left end, giving Lakeville North a 14-7 lead at halftime.

Back in charge, Lakeville North scored on its first two possessions of the second half. Curtis ran in from 17 yards out and Nelson juked his way in from 16 yards away to build a 28-7 lead.

Lakeville South (6-6) added a score on a 6-yard run by quarterback Reid Patterson, but North answered quickly with Nelson’s third touchdown of the game for the final margin.

“Our goal was to have eight drives,” Vossen said. “We did, four in each half.”

“Curtis and Raja, they’re special players,” he said. “They have two really talented kids they hand the ball to a lot and they’re hard to stop.”

For one half, it was a battle.

Lakeville North spotted Lakeville South a 7-0 lead, took a 14-7 advantage into halftime, then exploded in the second half for a 35-13 victory over intra-district rival Lakeville South.

Running backs Raja Nelson and Brian Curtis Jr. did almost all of the damage for the Lakeville North offense. Curtis ran for 207 yards and a touchdown while Nelson added 180 yards and three scores on the ground.

No. 1-ranked Lakeville North (12-0) will face Eden Prairie in the Class 6A championship game next Friday. The Panthers beat the Eagles 14-0 on Sept. 7.