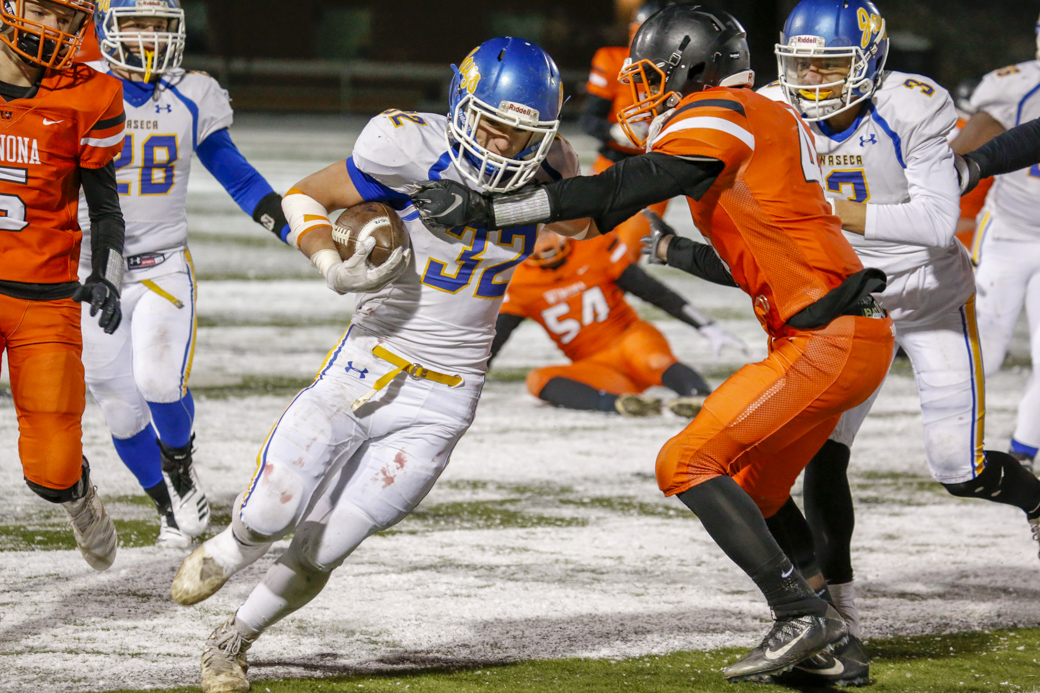 Waseca running back Joe Hagen fights for extra yards on a carry against Winona. Hagen scored five touchdowns in the Bluejays' 49-7 victory over the Winhawks. Photo by Jeff Lawler, SportsEngine

Waseca running back Joe Hagen had no trouble finding his footing on the snow-covered turf at Farmington High School on Friday in the Class 4A quarterfinals.

Hagen ran for 250 yards and five touchdowns in the first three quarters while leading Waseca to a convincing 49-7 victory over No. 2-ranked and previously unbeaten Winona 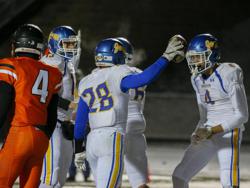 The Bluejays take a seven-game winning streak into the program’s first state semifinal appearance Thursday against the SMB Wolfpack at U.S. Bank Stadium.

“It’s been an incredible journey. I’m so proud of the kids and a little in awe of them right now,” said coach Brad Wendland, who guided Waseca to its only other state quarterfinal appearance in Class 3A in 2009. “They continue to get better, have more fun and be better teammates. It’s been incredible to watch as a coach.”

Since losing to Marshall 19-18 on Sept. 28, the Bluejays have averaged 47 points per game. They scored 48 in a section tournament upset of top-ranked Hutchinson and scored 41 points against Dassel-Cokato in the Section 2 finals.

“We knew we had talent, but at the beginning of the season we were kind of lacking focus and maturity. We’ve really grown together and matured and now we’re really playing at a high level,” Wendland said. “We just try to win every day, and when it’s practice we try to win for two hours at practice. Our mental toughness just continues to get better.”

The Winhawks fumbled on their next drive and Hagen quickly made them pay by scoring an 8-yard touchdown. Another Hagen touchdown and two-point conversion run put the Bluejays up 26-7 at halftime.

Hagen put the game out of reach in the third quarter when he broke free for touchdown runs of 56 and 73 yards.

Senior Terrell Hall accounted for Winona’s lone touchdown with a 1-yard run in the second quarter.

The Winhawks (10-1) reached the state quarterfinals for the third consecutive year. 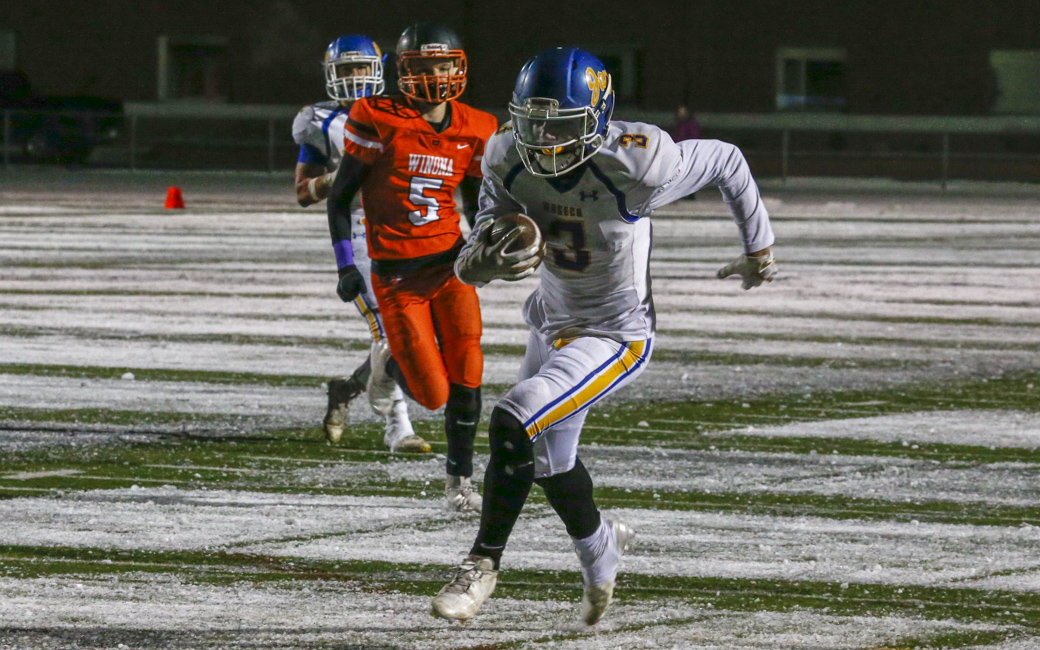 Waseca's Malik Willingham scores on a 16-yard reception against Winona. The Bluejays advanced to the Class 4A State semifinals with a 49-7 victory over the Winhawks. Photo by Jeff Lawler, SportsEngine

Waseca’s running backs had no trouble finding their footing Friday on the snow-covered turf at Farmington High School in the Class 4A quarterfinals.

They capped off six of the team’s first seven drives with rushing touchdowns and totaled 334 yards on the ground in a 49-7 victory over No. 2-ranked and previously unbeaten Winona.

The Bluejays also defeated No. 2 Hutchinson and No. 10 Dassel-Cokato in the section tournament. They take a seven-game winning streak into the program’s firstr state semifinal appearance. Their offense scored at least 40 points in all seven victories.

A pair of early Winona mistakes fueled Waseca’s fast start. Two plays after Winona’s errant long snap on a punt attempt gave the Bluejays the ball at the 10, senior running back Hayden Groll opened the scoring with a 4-yard touchdown run.

The Winhawks fumbled on their next drive and senior Joe Hagen quickly made them pay by scoring the first of his three first-half touchdowns. Hagen’s 4-yard score and two-point conversion run with 22 seconds left put the Bluejays up 26-7 at halftime.

Hagen broke free for touchdown runs of 56 and 73 yards in the third quarter. Hagen rushed for 250 yards despite sitting out the fourth quarter.

Senior Terrell Hall accounted for Winona’s lone touchdown with a 1-yard run in the second quarter. The Winhawks (10-1) reached the state quarterfinals for the third consecutive year. 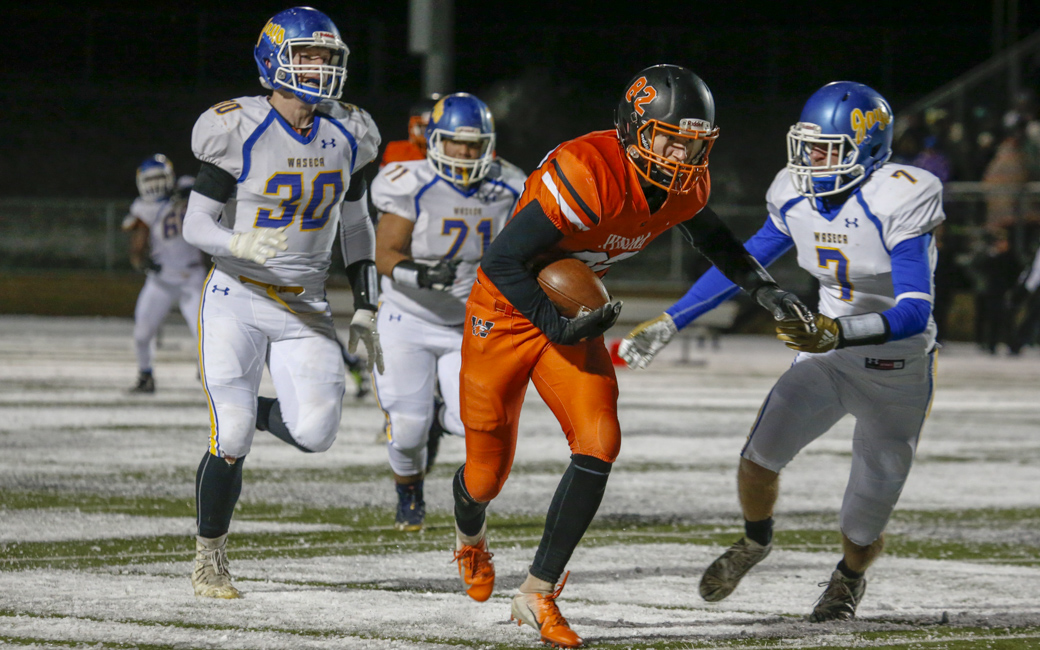 Winona's Matt Rinehart tries to get behind the Waseca defense on a reception Friday night. The Winhawks saw their undefeated season end with a 49-7 loss to the Bluejays. Photo by Jeff Lawler, SportsEngine