Fifty-six teams still have a shot at getting to U.S. Bank Stadium next week. The Star Tribune's crack prep writers offer their take on who the first three will be. 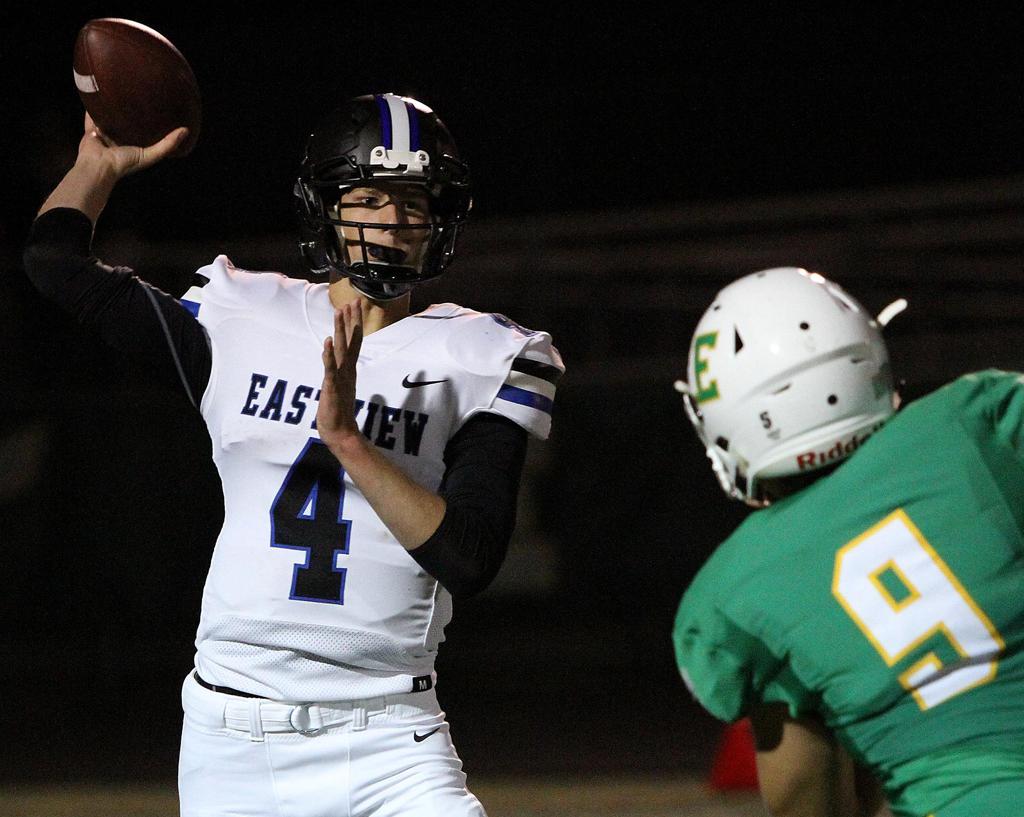 Eastview quarterback Erik Reimann (4) leads the surprising Lightning (6-4) against Blaine (10-0), one of four No. 1 seeds in Class 6A. Photo: Drew Herron, SportsEngine

Fifty-six teams will suit up in the next three days for a shot at playing in U.S. Bank Stadium next week in the football state tournament semifinals. Staff prognosticators Jim Paulsen (25-16) and David La Vaque (23-18) size up the Thursday games.

David says: No. 2 Eden Prairie edged Minnetonka 23-16 in Week 7. A closer outcome this time depends on the Skippers playing with better discipline and their defense preventing the Eagles’ signature, grinding drives. But gains in those areas might not be enough. Eden Prairie 21, Minnetonka 20

Jim says: With all due respect to Minnetonka and coach Dave Nelson— one of the really good guys in the sport — the Skippers just don’t have the full head of steam they had last year. This is Eden Prairie’s time of year. The Eagles know what it takes to win. Eden Prairie 24, Minntonka 7

David says: A little more offensive production and Eastview would be nearer to Blaine’s victory total. But it’s hard to pick against the explosive Bengals, who will deliver despite the cold and a solid Lightning defense. Blaine 28, Eastview 21

Jim says: After picking against Blaine more than once this season, and hearing about it, I’ve learned my lesson. Eastview has been a nice surprise. But Blaine is more complete and can win with offense or defense. Blaine 21, Eastview 10

David says: Kudos to Johnson, my alma mater, for returning to the state tournament for the first time since 1981. The Governors’ defense has been stout all season but can the offense make enough plays? St. Anthony shut down a potent Fridley team last week. St. Anthony 20, Johnson 14

Jim says: Johnson’s return is a nice story, but it’s not much different for St. Anthony, with just one previous tournament appearance in 1999. The Huskies have flown under the radar all season. They’re well-balanced with offensive stars in QB James Wald and WR Troy Ellison and a stingy defense. St. Anthony 33, Johnson 14