Jackson Luhrs passed to Oscar Diaz for an 8-yard touchdown that gave host South St. Paul a 21-14 victory in overtime over Simley in the Class 4A, Section 3 semifinals on Saturday. 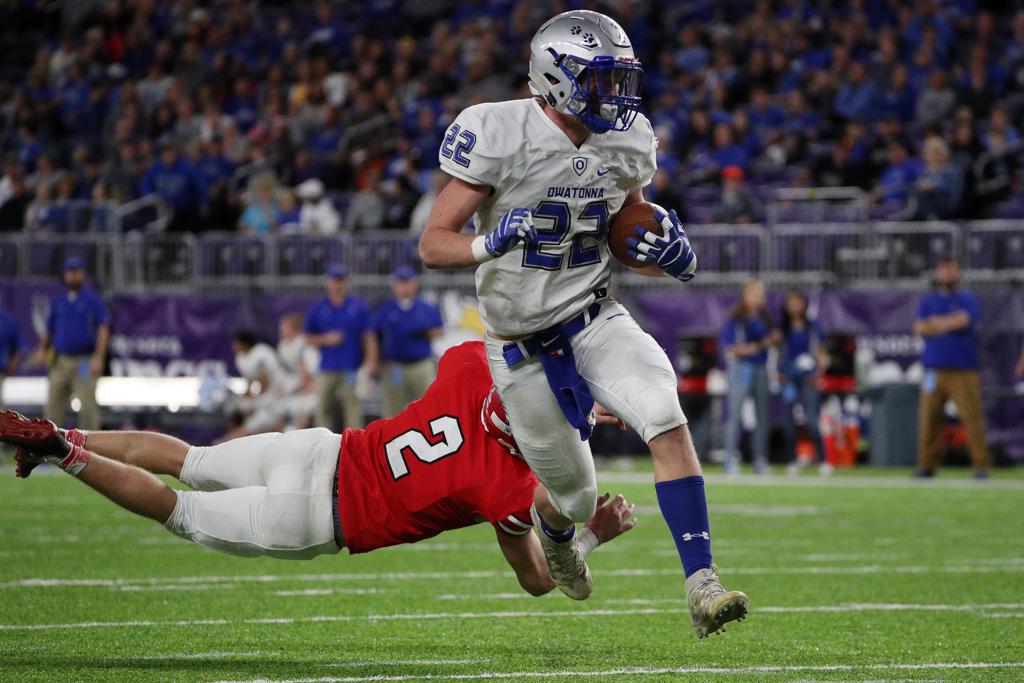 Jackson Luhrs passed to Oscar Diaz for an 8-yard touchdown that gave host South St. Paul a 21-14 victory in overtime over Simley in the Class 4A, Section 3 semifinals on Saturday.

The Packers defense protected the overtime lead, forcing a fourth-down incompletion in the end zone.

The winning throw was one of three touchdown passes thrown by Luhrs. He connected with Marquise Gleb twice in the first half.

Devon Richards scored for Simley on an 80-yard kickoff return after the Packers’ first touchdown. Alec Frederick tied the score for the Spartans on a 1-yard run in the third quarter.

In other section semifinal games:

Chaska 35, Waconia 14: The fourth-seeded, visiting Hawks upset the top-seeded Wildcats in Class 5A, Section 2, beating a team that shut them out three weeks ago. Chaska’s defense scored two touchdowns. Stevenson Klotz had a 77-yard fumble return, and Maxwell Lommel scored on an interception. Klotz also scored on a 12-yard run. The Hawks will travel to third-seeded Mankato West for the section title Friday.

Owatonna 63, Rochester Mayo 28: Jason Williamson ran for 441 yards and eight TDs, both school records, to lead the Huskies past the Spartans in Class 5A, Section 1.

Fridley 42, DeLaSalle 20: Kaleb Blaha passed for 159 yards and three touchdowns and ran for 110 yards and two touchdowns to lead the Tigers to the victory in Class 4A, Section 4. Fridley will play St. Anthony for the section title.

St. Agnes 34, Concordia Academy 7: Terrell Jones rushed for 304 yards and three TDs to lead the Aggies past the Beacons in Class 2A, Section 4. The Aggies will play Minneapolis North for the section championship on Friday.

Lester Prairie/Holy Trinity 20, Mayer Lutheran 15: Michael Ziermann threw a 35-yard TD pass to Dylan Ruzicka with less than two minutes to play to lift the host Bulldogs in Class 1A, Section 4. The Bulldogs will play Kerkhoven-Murdock-Sunburg in the final.