The Wolfpack's 19-15 victory avenges playoff losses to the Spartans in the last two seasons. 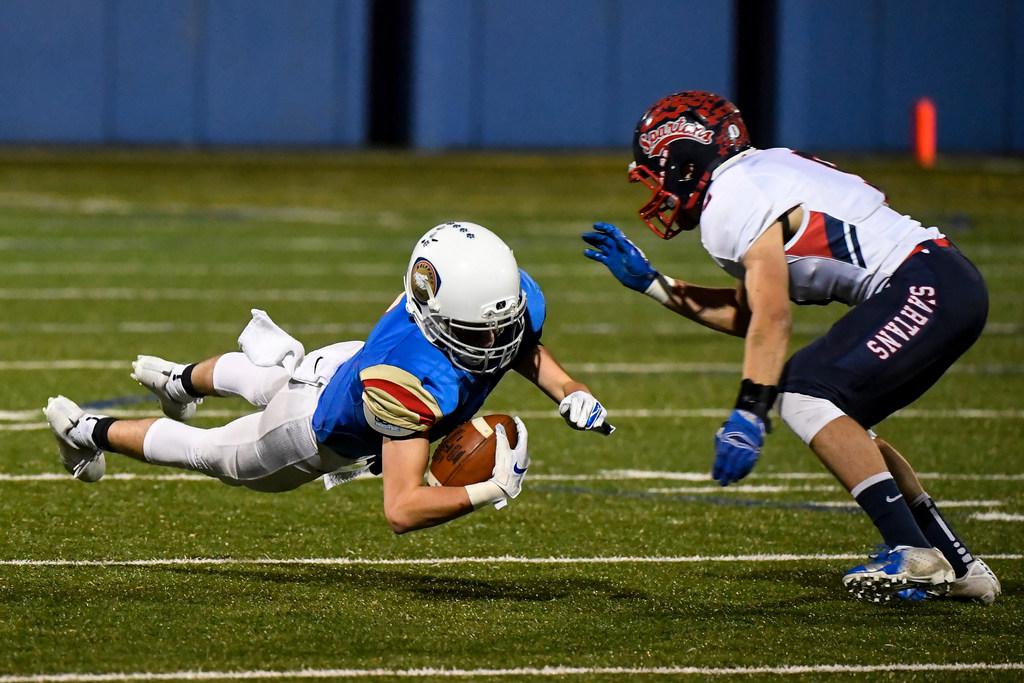 After two years of early playoff losses to Orono, the SMB Wolfpack was determined that this was its year. The team struggled early in the game Saturday, and trailed by as many as nine points in the third quarter, but rallied to defeat Orono 19-15.

Held scoreless in the first half, SMB — a cooperative of St. Paul Academy, Minnehaha Academy and Blake — regained a bit of swagger by scoring on its opening drive of the second half, a 1-yard run by quarterback Jalen Suggs.

The two-point conversion failed, but the Wolfpack, still trailing 8-6, showed it was determined to make a run.

“It’s a four-quarter game,” said Suggs, a junior. “We came out, got a TD and it gave us momentum. We kept it rolling.”

Orono answered with a long drive that ended in a 7-yard, fourth-down scoring run by quarterback Nick Prentice to take a 15-6 lead.

But SMB considers itself a second-half team and it showed why, matching Orono’s score with a 65-yard scoring strike from Suggs to Craig McDonald, cutting the deficit to 15-13.

“McDonald showed why he’s one of the best players in the metro,” SMB coach Collin Quinn said. “His catch got us going.”

Said Suggs, “They thought they had the momentum That play sucked it right back out of them.”

Rain started falling in the fourth quarter and it worked in SMB’s favor. Wolfpack cornerback Bobby Chancellor intercepted an errant Prentice pass – a rare mistake by the Orono quarterback -- giving SMB the ball on the Orono 23.

“After we got that interception, we got the energy going,” linebacker Kaden Johnson said. “I’m thinking ‘Keep it going. And don’t mess up.’”

Three plays later, running back Siegel Howard burst up the middle for a 10-yard touchdown, giving SMB (9-0) the lead for good. The defense held one last time, with McDonald knocking down a fourth-down pass to seal the victory.

Orono took the lead in the first quarter when quarterback Nick Prentice hit Chad Mrachek all alone down the seam for a 28-yard touchdown. A two-point conversion gave the Spartans an 8-0 lead.

SMB spent most of the first half in poor field position, starting its possessions from its own 7, 24, 11 and 3 yard lines.

SMB put together one significant drive, marching as far as the Orono 5-yard line. But on first and goal, Suggs was hit in the backfield and fumbled. Orono recovered at its own 10-yard-line, ending the threat.

“It was just a great, great win,” Quinn said. “We just kept pounding away and eventually, something goes. It was a fun night.”

SMB, held scoreless in the first half, rallied with three second-half touchdowns to defeat Orono 19-15 in the Class 4A, Section 5 playoffs.

The Wolfpack's Jalen Suggs rushed for a touchdown and threw a pass to Craig McDonald for a 65-yard touchdown. Siegel Howard’s 10-yard run with 7:57 left gave SMB (9-0) the lead for good.

Orono had defeated SMB, a cooperative of St. Paul Academy, Minnehaha Academy and Blake, in the playoffs in each of the past two seasons.