Jackson Luhrs contributed 202 of the Packers' 298 yards of total offense, including an 11-yard, game-winning strike to Oscar Diaz. 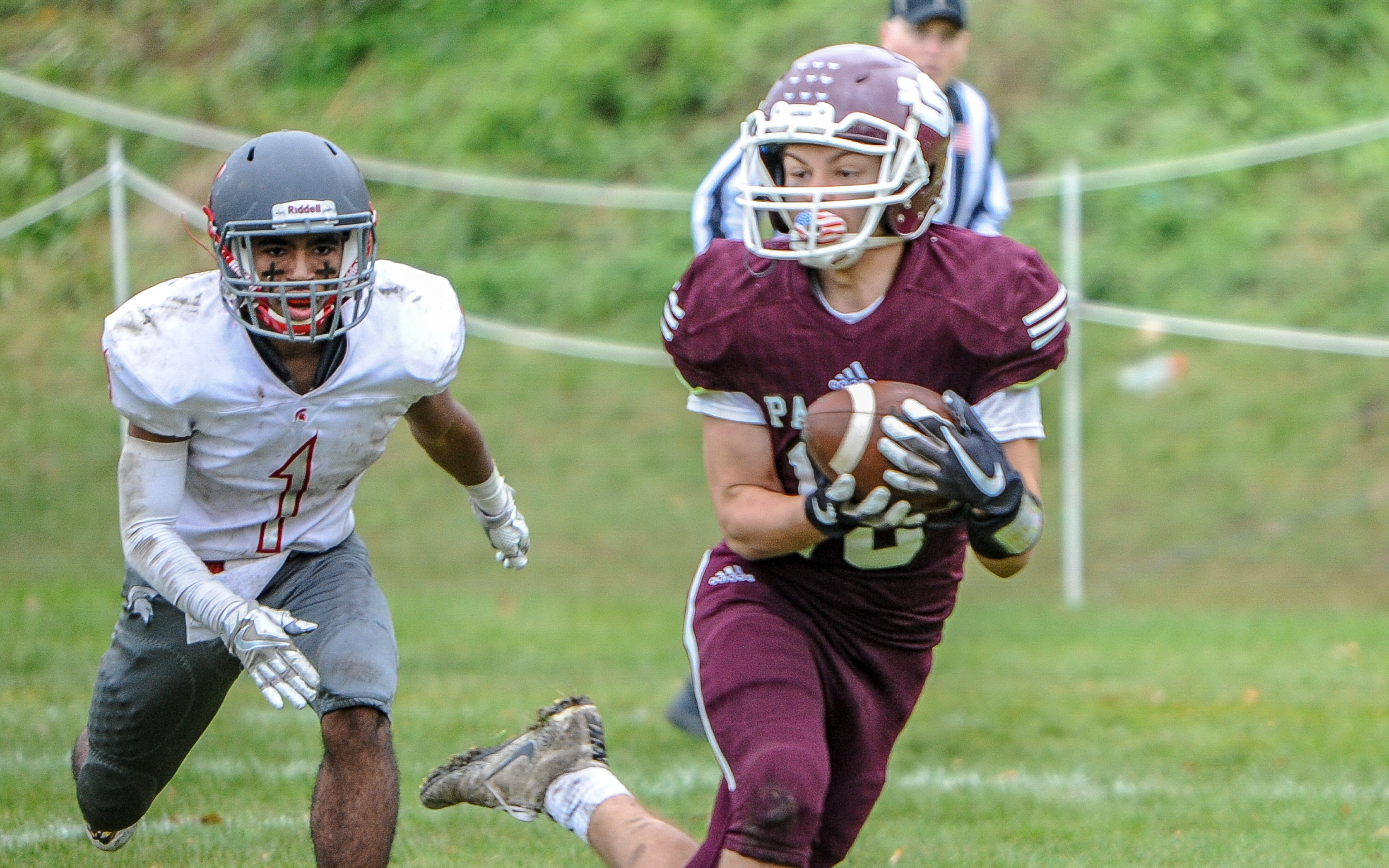 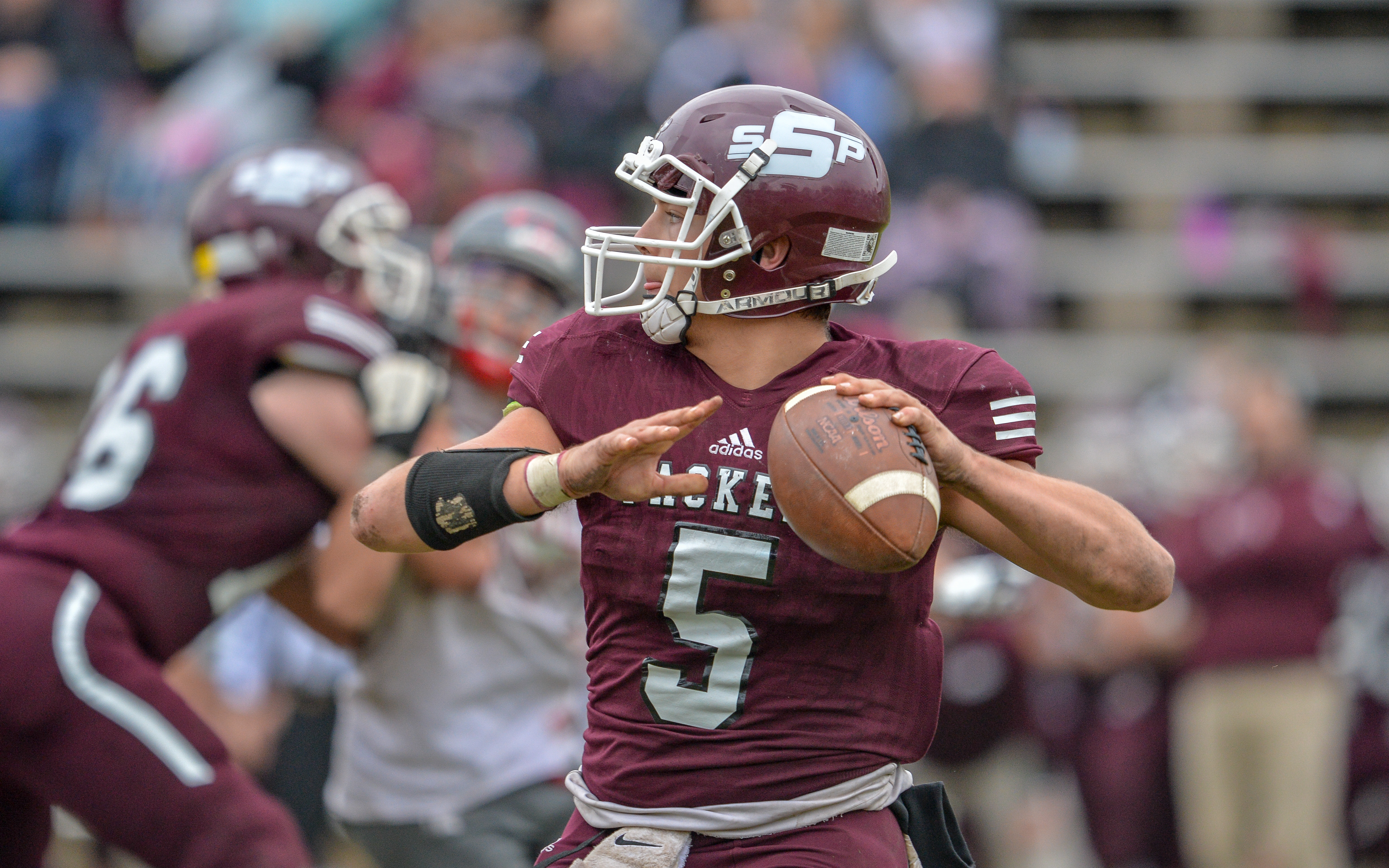 Jackson Luhrs looks down field for an open receiver in the fourth quarter Saturday. South St. Paul beat Simley in overtime to advance to the Class 4A, Section 3 final. Photo by Earl J. Ebensteiner, SportsEngine 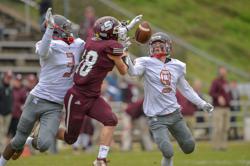 Jackson Luhrs has been the main cog in the South St. Paul football team's offense all season long.

But in the days leading up to the Packers' Class 4A, Section 3 semifinal contest against Simley, the coaches switched Luhrs from quarterback to fullback and inserted Mitch Felton at QB.

"Jackson is a team-first guy," Sexauer said. "Last year, late in the season, we had a player get hurt, so we moved him to defense — and he handled that really well.

"When we told him we were moving him to fullback, he embraced it. What's best for the team is what he wants to do right now," Sexauer said.

Part of the reason Luhrs embraced it, he admitted, was because he felt it gave him more chances to create collisions.

"We've been thinking about this for a couple of weeks," Luhrs said of the change. "I'm a downhill runner, and I like hitting kids, but Mitch is fast and that makes him a good quarterback.

But when Saturday's matchup at Ettinger Field came down to crunch time, Luhrs switched back to quarterback. And his third touchdown pass of the day, an 11-yard scoring strike to fellow senior Oscar Diaz in overtime, helped give South St. Paul a 21-14 victory.

"When is the last time South St. Paul had three passing touchdowns to win a game? I don't know that we've ever had that," Sexauer said as his team improved to 4-5 while ending Simley's season at 4-6.

That was a tribute to Luhrs, who completed 7-of-10 passes for 101 yards while carrying the ball 25 times for 101 more yards. That meant the senior was responsible for 202 of the Packers' 298 yards of total offense.

"[Luhrs] is a great player and the key player on their team," Simley coach Rex King said. "He could play for any team in the Metro.

The left-handed Luhrs got his team on the board first when he found sophomore Marquise Gleb alone in the right flat for a 47-yard touchdown pass with 4:52 left in the first quarter.

But South St. Paul's lead was short-lived as the Spartans' Devon Richards took the ensuing kickoff and hauled it back 90 yards for a game-tying TD.

The Packers responded with a 15-play drive that saw Luhrs and Felton handle most of the ball-carrying. On one play — a critical fourth-and-one from the Spartans' 11 — they both touched the ball as Luhrs picked up a Felton fumble and ran for the first down.

Luhrs finished that drive with a 7-yard touchdown pass to Gleb with 7:08 to play before halftime.

"The coaches told me the defensive back would bump me, and I just had to fight through him and then box him out in the end zone," Gleb said. "But the pass was at my feet, so I dove for it.

"I was scared I would drop it, but I caught it."

In the second half the Simley offense — which ran just nine plays that netted a negative five yards — came to life.

"On offense we switched our personnel. ... We told the team that they were daring us to throw the ball. If we wanted this game, it had to be in the air and on the perimeter."

On its second drive of the third quarter, the Spartans tied the game with 3:04 on the clock thanks to a 7-yard run by Alec Frederick.

From there both teams had plenty of opportunities to win the game in regulation, but neither side was able to deliver the knockout blow.

That came in overtime — thanks, as you would expect, to Luhrs.

On a second-down play from the Simley 11, Luhrs found a wide-open Diaz on what appeared to be a "jump" pass. It turned out to be nervous feet.

"I was excited — I saw him wide open," Luhrs said. "Right there wasn't supposed to be a jump pass, but I had the jitters."

Then the Packers defense took over, allowing Simley just one yard on its four plays, including back-to-back incompletions.

"Our defense was getting stops, but it's been that way all season," Gleb said. "When we scored in the overtime, we knew the defense would get the stop."

Jackson Luhrs found Oscar Diaz for an 11-yard touchdown pass in overtime, and the South St. Paul defense held to give the Packers a 21-14 victory over Simley in a Class 4A, Section 3 semifinal Saturday at Ettinger Field.

The game-winner was one of three TD passes thrown by Luhrs for South St. Paul (4-5). He added scoring strikes of 47 and 7 yards to Marquise Gleb in the first half.

Simley (4-6), which had minus-5 yards of total offense in the first half, tied the contest on a 1-yard scoring plunge by Alec Frederick in the third quarter.

South St. Paul awaits the winner of St. Paul Johnson and Hill-Murray to play for the section title. 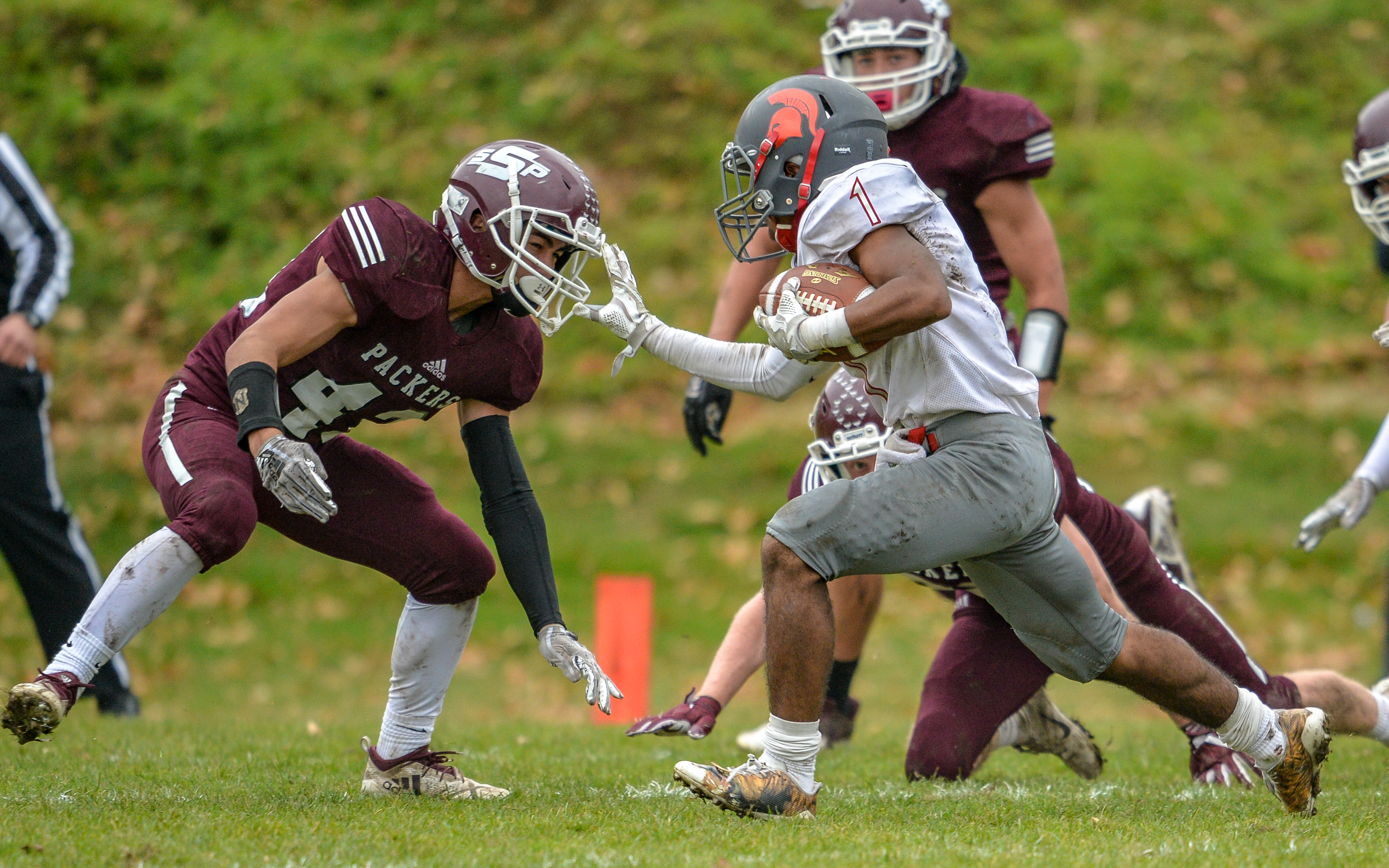 Simley senior Evan Johnson fights off the South St. Paul defense in his search for the end zone during Saturday's 21-14 overtime loss to the Packers. Photo by Earl J. Ebensteiner, SportsEngine