The Spartans' 23-17 victory was keyed by quarterback Nick Prentice’s short touchdown run and two-point conversion late in the third quarter. 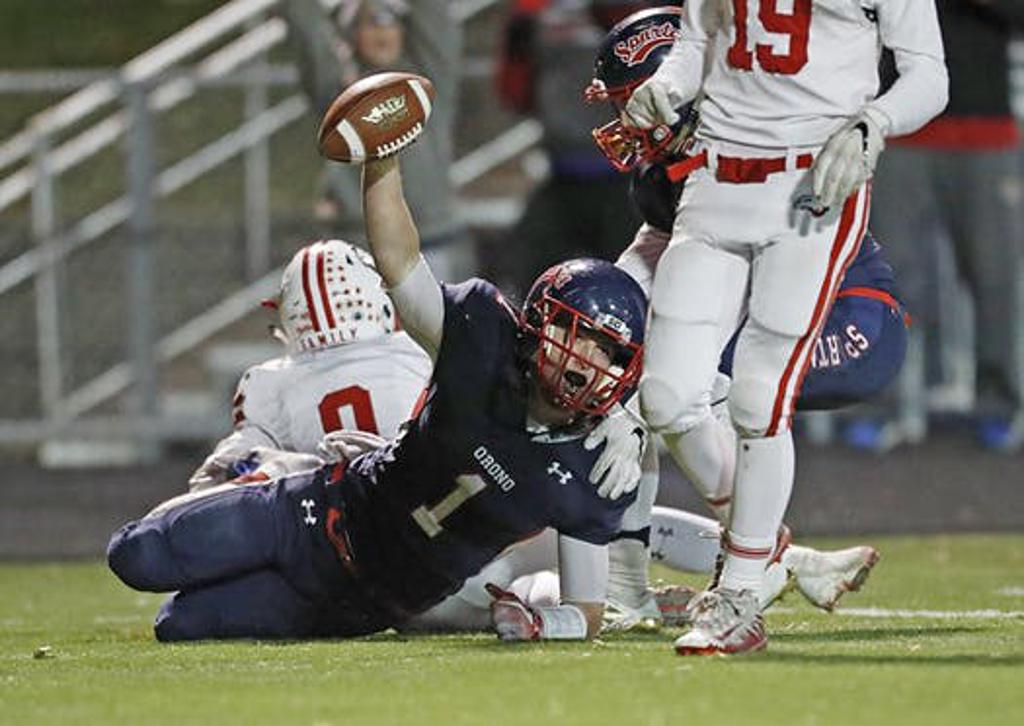 Orono quarterback Nick Prentice (1) lands with the ball just one yard short of the goal line during the second half. Photo: Leila Navidi * leila.navidi@startribune.com

Somewhere between the thrill of crushing the No. 1 team in Class 4A and the prospects of playing the No. 1 seed in Section 5, Orono forgot priority No. 1 on Tuesday night — defeating Mound Westonka.

Though unfocused to start and turnover-prone throughout, the host Spartans rallied for a 23-17 victory to open their Class 4A, Section 5 title pursuit.

“I can’t believe I make my living on the mentality of 15-, 16- and 17-year-old boys because sometimes you just can’t tell them anything,” Orono coach Jeff Weiland said. “Mentally, they weren’t there tonight so we were fortunate to beat a great Mound Westonka team.”

The game showed the depth in Section 5. Mound Westonka got the No. 5 seed after a six-victory season. And the White Hawks came prepared, building a 17-8 lead on three scoring drives.

Both touchdowns in that stretch came after special teams’ miscues by No. 4 seed Orono. Punt returners fumbled the ball on both occasions, leading to a Brandon Hokkanen 17-yard touchdown pass to Calvin MacKell and an Adam Nobs’ 8-yard scoring run.

Orono cut the deficit to 17-15 with 1:48 to go before halftime on Nick Ruhland’s 7-yard touchdown run.

“It’s a good rivalry and we knew we had to bring our best,” White Hawks coach Nick David said.

“It was turnover city,” Orono quarterback Nick Prentice said. “I think it just showed how gritty our team is. It’s not always pretty but the hardest working team is the one that’s going to win the game.”

Prentice kept the ball and three carries and 31 yards later, scored from a yard out and ran for a two-point conversion for a 23-17 lead.

Orono edged visiting Mound Westonka in a 23-17 victory Tuesday in a Class 4A, Section 5 first round game.

The Spartans went ahead to stay on quarterback Nick Prentice’s short touchdown run and two-point conversion late in the third quarter. No. 5 seed Mound Westonka (6-3) couldn’t retake the lead.