Oct. 17: The Hornets can end a five-year losing streak to the Eagles and secure a share of the Metro West subdistrict title with a victory over its nemesis. 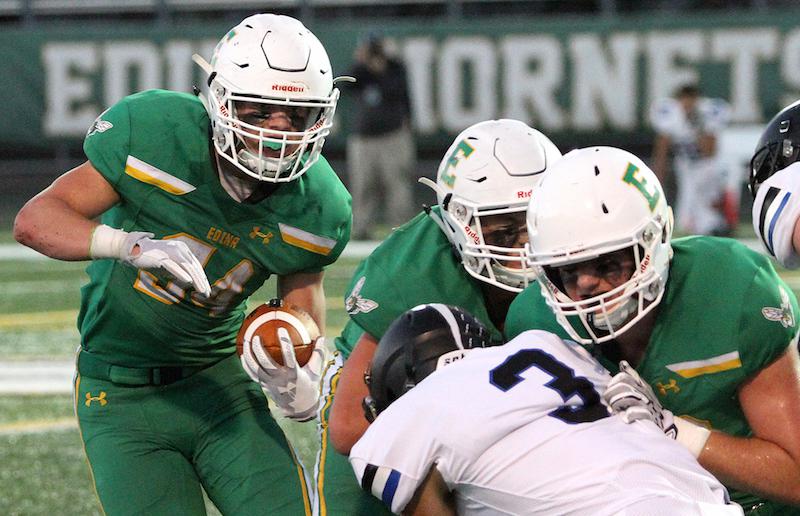 Edina has lost its last five games against Eden Prairie, but a stalwart defense will aim to slow a surging Eagles offense in Wednesday's regular-season finale. Photo by Drew Herron, SportsEngine

We task our reporters with identifying several intriguing games throughout the state to assemble our Top Games of the Week. The matchups are presented in no particular order, and when there are additional games we want to highlight, we’ll include them with brief notes.

Other games to keep an eye on

Cook County vs. South Ridge, 5 p.m., Wednesday, Oct. 17. A lengthy drought of league titles will end for either Cook County or South Ridge when the 9-Man contenders compete for the North Blue subdistrict's top spot. The No. 5-ranked Vikings (7-0, 4-0) haven't won a title since 2011, and the No. 7-ranked Panthers' (7-0, 4-0) last title came in 2012. These are also two of the eight remaining undefeated teams in 9-Man this season.

Rushford-Peterson vs. Blooming Prairie, 7 p.m., Wednesday, Oct. 17. Blooming Prairie (7-0, 6-0) will have plenty on the line this week when it meets Rushford-Peterson (6-1, 6-1). The No. 3-1A Awesome Blossoms can lock up not only the North Blue subdistrict crown but also the top seed in a competitive Class 1A, Section 1. The teams split their series last season, with the Trojans recording a 39-35 victory in the regular season and Blooming Prairie winning 21-20 in the section semifinals.

Marshall vs. Jordan, 7 p.m., Wednesday, Oct. 17. Marshall (7-0, 7-0), ranked sixth in Class 4A, aims to push its regular season winning streak to 24 games while clinching the South Central Red subdistrict title against No. 9-3A Jordan (6-1, 6-1). The Tigers have dominated their tilts with the Hubmen — outscoring them 207-48 in their last three meetings, including a 76-36 blowout last season.

The MN Football Hub poll is for entertainment purposes only.