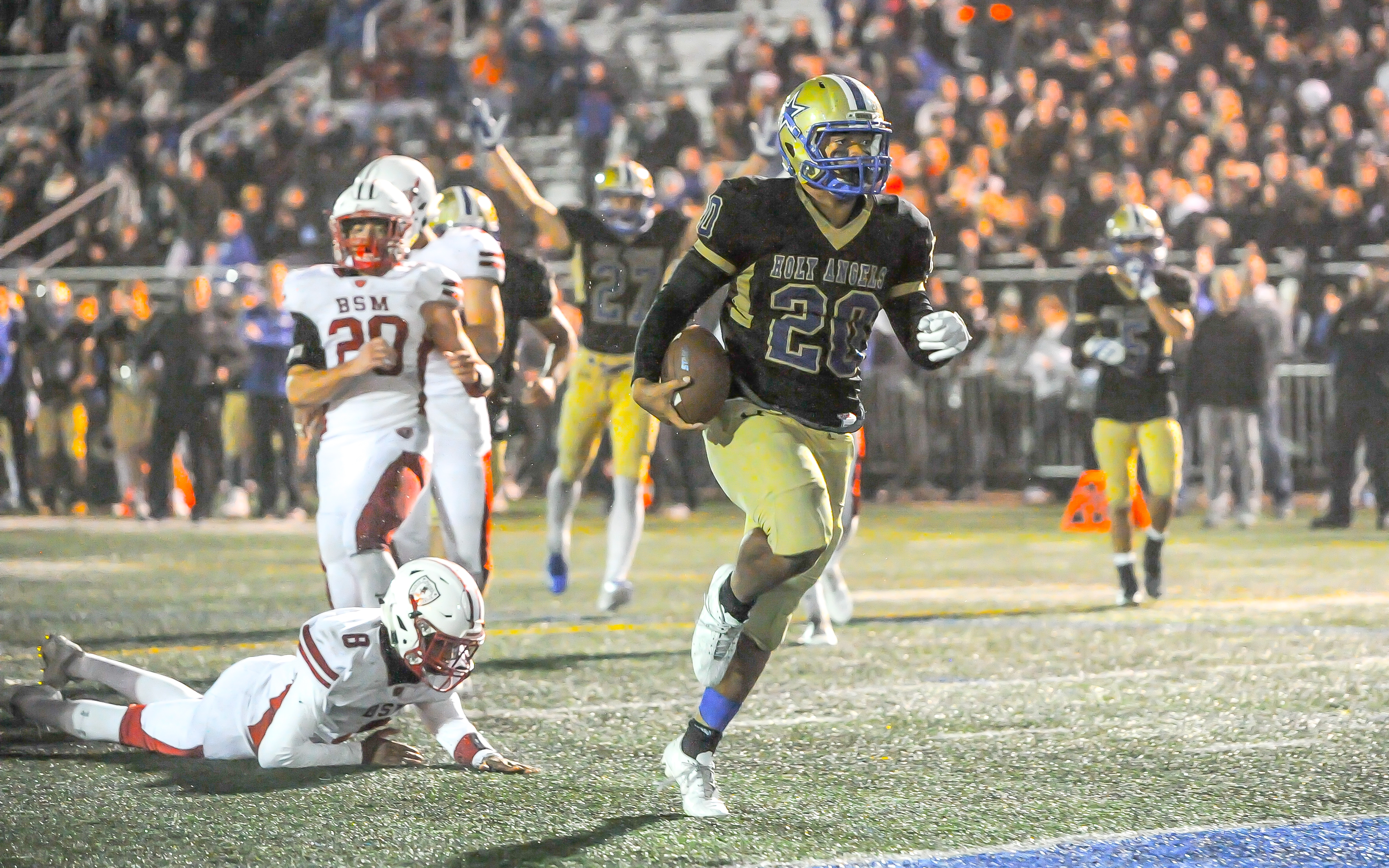 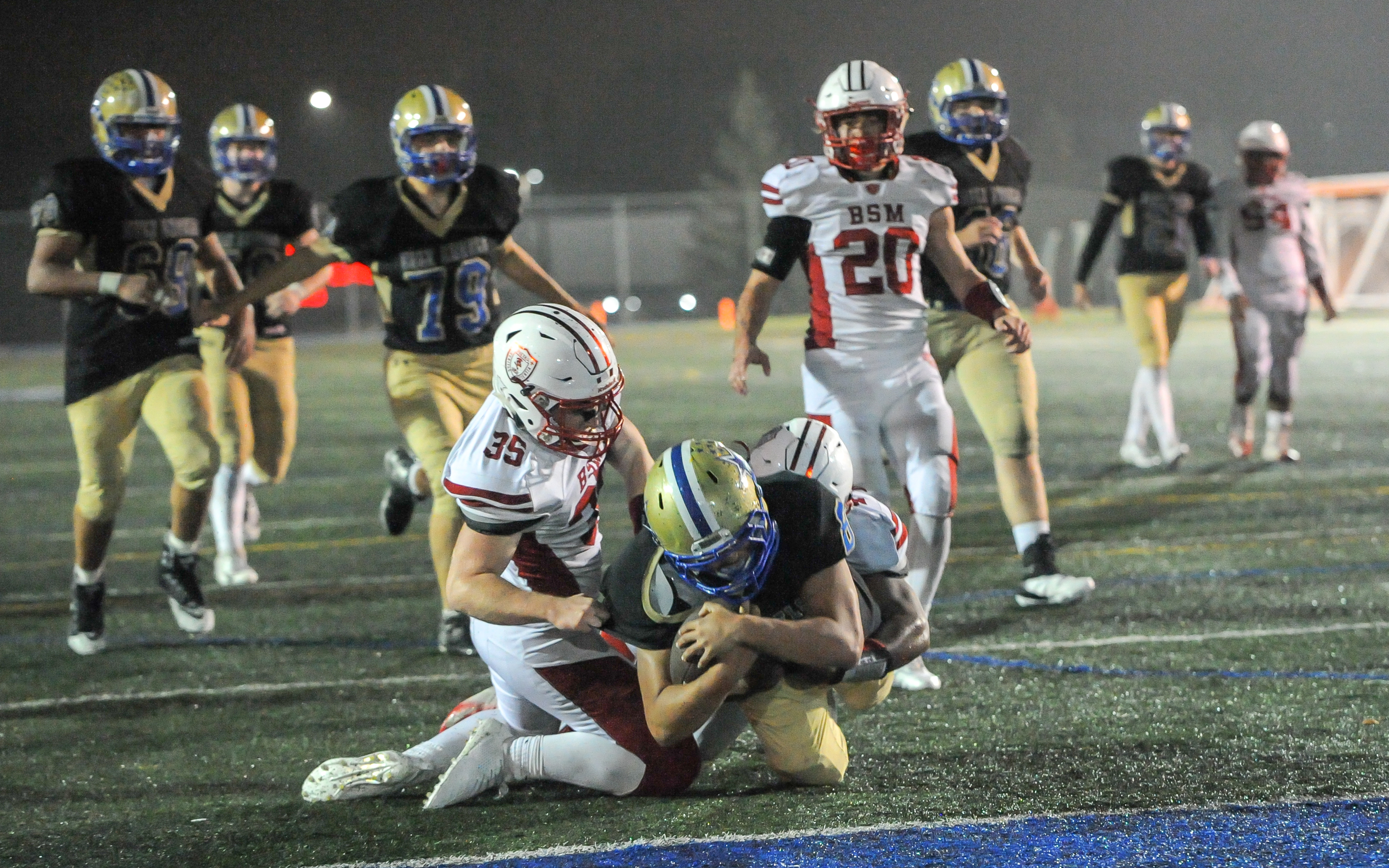 Holy Angels' Rook Rowe fights his way into the end zone, giving his team the lead in the fourth quarter as the Stars went on to beat the Red Knights in front of their home crowd 34-17. Photo by Earl J. Ebensteiner, SportsEngine

The Holy Angels football team won 12 of its 13 games during a 2017 season that included a Class 4A state championship. The one loss? A 20-19 final against Benilde-St. Margaret's last October.

With an undefeated record and a large crowd on homecoming, the Stars, ranked No. 1 in the Class 4A Associated Press poll, wanted to make sure a repeat didn't happen again Friday. And with three fourth-quarter touchdowns, they did just that in a 34-17 victory. 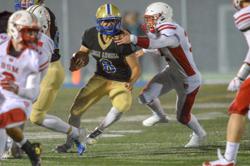 As if there was not enough motivation already, coach Jim Gunderson said his team set out to get a win for the graduated seniors who are no longer part of the program.

"We were getting messages all week long from the alums from last year saying, ‘Get this one for us,’" he said. "So it meant a lot to represent those guys."

Scoring two of those three fourth-quarter touchdowns was quarterback Rook Rowe. His 25-yard rush helped give the Stars a 20-17 lead, and his second touchdown, plus another from teammate Thomas Shelstad, put the game away.

It was the latest contributions for the senior who’s in his first season as a quarterback.

Rowe had primarily used as a running back and linebacker last year when quarterback Joseph Heimbold helped lead the Stars’ offense to a state title. But with Heimbold graduating, Holy Angels’ coaching staff needed to find a replacement.

"One day in practice they saw me throwing, and they were like, 'Oh, we might use him as a quarterback next year,''" Rowe said. "I worked on it all throughout the offseason to get to this point."

Both offenses needed to shake off turnovers throughout Friday’s game as they played through a cold, steady rain. Both defenses forced five turnovers, including a fumble recovery for a touchdown by the Red Knights’ John Landry in the third quarter.

"It was just on to the next play all game," Rowe said. "We had that mentality that there are going to be ups-and-downs in the game, but we've got to keep pushing through it."

Shelstad finished with two touchdowns and rushed for 99 yards for Holy Angels. Isaiah Smith ran for 95 yards for Benilde St-Margaret's (3-3, 3-1), while his teammate, Landry, scored a defensive TD and on a 16-yard reception.

Coming off a 2017 state championship and with a perfect record intact, Holy Angels looks ready to contend for another when the playoffs begin later this month. But Gunderson is making sure the team does not look too far ahead.

"We've got basically a week-and-a-half to ratchet and fix mistakes to get ready for the playoffs," Gunderson said. "It's one day at a time to get better."

A constant drizzle and cold conditions did not make things easy for the offenses of Holy Angels (6-0, 4-0) and Benilde-St. Margaret's (3-3, 3-1) on Friday night, but the Stars committed to a ground game and prevailed at home, winning 34-17.

Benilde-St. Margaret's held a 17-14 lead heading into the fourth quarter, thanks to field position on turnovers and a defensive touchdown. However, when it became crunch time, the Associated Press' No. 1 ranked team in Class 4A came through.

Stars quarterback Rook Rowe scored two rushing touchdowns in the fourth quarter and Thomas Shelstad added another in the victory. Shelstad finished with two touchdowns and rushed for 99 yards for Holy Angels.

Isaiah Smith ran for 95 yards for the Red Knights, while John Landry scored on a 16-yard touchdown reception and added a defensive touchdown on a 26-yard fumble recovery. 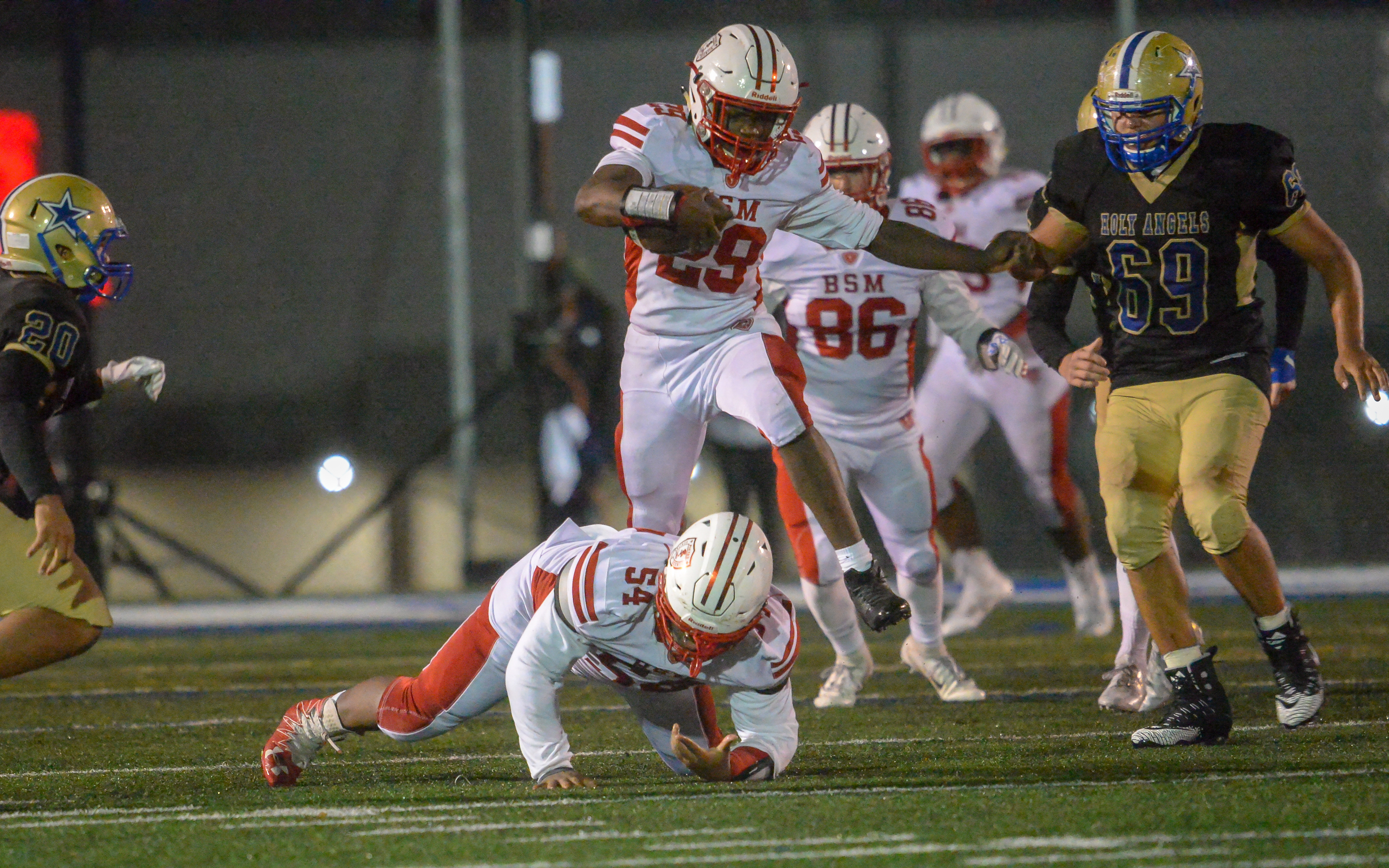 Benilde-St. Margaret's junior Isaiah Smith hurdles his teammate Elijah Brown in hopes of reaching the end zone in the third quarter. The Red Knights lost to the Stars 34-17 on a misty Friday night. Photo by Earl J. Ebensteiner, SportsEngine