Jimmy Buck scored the game's final two touchdowns to win the game for the Spartans. 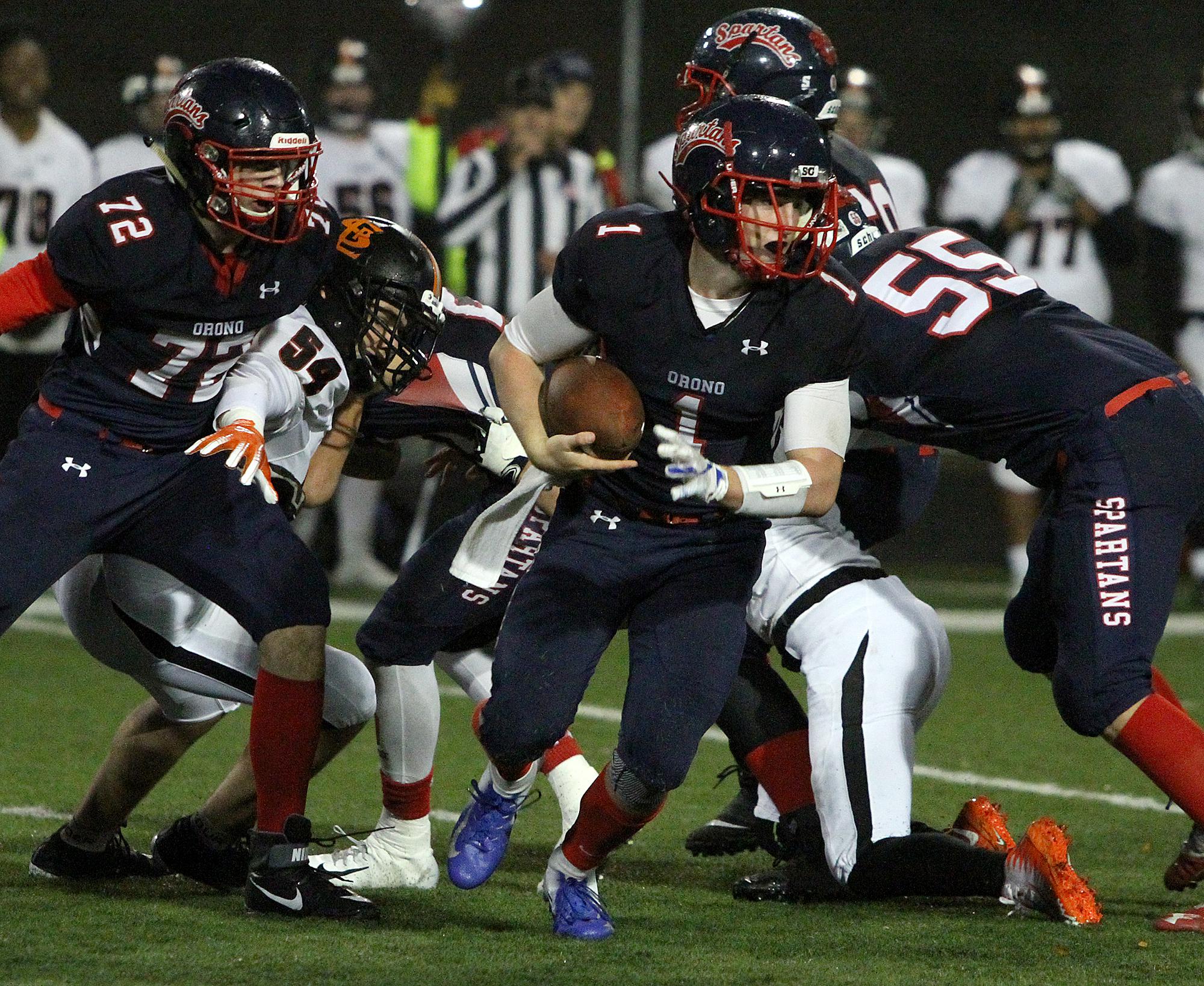 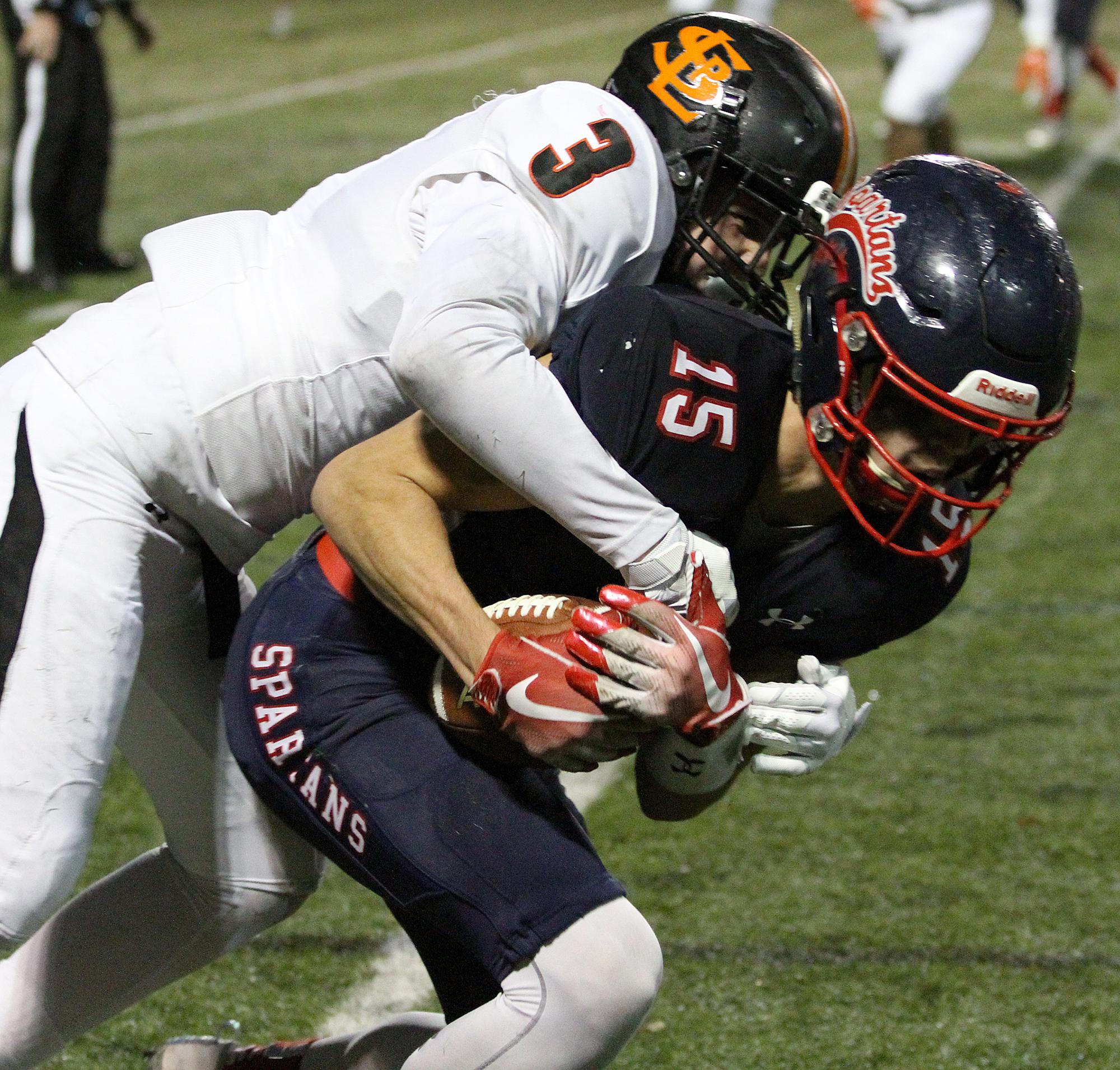 One year can make all the difference — so long as that time is used properly.

A year ago, Orono wide receiver Jimmy Buck was just a guy. This fall, as a senior, he’s The Guy — and he showed it with two huge touchdown catches in a homecoming comeback win against St. Louis Park Friday night.

Orono trailed all game until Buck’s touchdown with 1 minute, 17 seconds left in the fourth quarter set up a tying 2-point conversion to get the Spartans to overtime with the Orioles. And on the second play of overtime, Buck caught a ball on an out route for an 8-yard touchdown and a lead that the Spartans made hold up for a 20-14 victory. 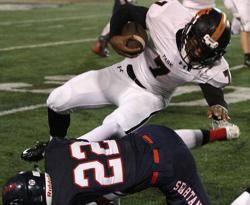 As a junior, Buck had 16 catches for 248 yards and a TD in seven regular-season games. This fall, he entered Friday leading the state in receiving yards and tied for second in touchdown catches. He finished the win over St. Louis Park with 10 catches for 111 yards and two TDs.

“I’m just glad that it’s helping my team,” Buck said. “I go as hard as I can, and no matter what the outcome is, I want to leave everything out on the field. It’s my senior year. Our offensive line makes great blocks so my quarterback can have time. My other receivers make great blocks so I can run the ball, so all the credit to them.”

Buck had been an athletic quarterback, but was moved to receiver as a junior. After an offseason of work and camps to improve his skill, he’s blossomed. At a shade taller than 6-foot-3, with a combination of speed, quickness and leaping ability, he’s been a tough matchup for defenses this year.

“He’s just a hard worker,” quarterback Nick Prentice said. “He’s the last guy on the field asking me ‘hey, do you want to throw a couple more balls?’ One of the last guys in the weight room. He spent all summer working, going to camps, getting recruited by colleges.”

Buck now has 42 catches for 835 yards and 10 touchdowns, as well as a pair of 2-point conversions. His performance in the fourth quarter and overtime against the Orioles helped get Orono (3-3, 2-1) back to a .500 record.

Whether it’s outrunning cornerbacks on vertical routes, going up to snag a high pass, or even making the first man miss on a screen pass, Buck can do all the things a top-tier wideout needs.

“We try to use him any way we possibly can to free him up,” Orono coach Jeff Weiland said. “It’s a challenge, because coaches we coach against are really good, and find ways to stop him. But yeah, we’ve been trying to move him around, do different things with him.”

On the game-tying touchdown, Buck came across the back of the end zone, escaping three defenders as Prentice scrambled and rolled out of the pocket before zipping a pass in for a touchdown. The fact the play came together boiled down to trust.

“That’s a big thing for me and him,” Prentice said. “We developed it over the offseason. A lot of long talks, a lot of staying after practice and working on that stuff, just trusting each other.”

Orono’s been banged up, and lost more players to injury during the St. Louis Park (2-4, 1-3) game. With all the attention Buck gets, it’s forced Prentice to look to other players, like little-used tight end Jack Patterson who had three catches on the final game-tying drive, as well as the tying 2-point conversion.

Seven different receivers caught at least one pass, something made easier by the attention Buck draws by opposing defenses.

“We’re taking advantage of what we can away from him,” Weiland said. “So unfortunately, they’re saying, ‘Beat us some other way.’”

But with the game on the line, the Spartans turned to their big gun. In overtime, Prentice fired a pass through a defender’s hands and into Buck’s for the go-ahead touchdown.

Teams are aware they need to stop Buck to beat Orono. At this rate though, it’s apparent Buck can fight through that and succeed anyway.

“Jimmy’s a great receiver, I think he’s the best receiver in the state,” Prentice said. “He just goes up and makes plays. Obviously teams know that now.”

It was a homecoming Orono won’t soon forget. Trailing most of the game, the Spartans came back to beat St. Louis Park 20-14 in overtime Friday night at Pesonen Stadium in Orono.

Orono (3-3, 2-1) turned the ball over four times, but got it back, down eight points with less than 5 minutes to play in the fourth quarter. The Spartans drove down the field and quarterback Nick Prentice found Jimmy Buck in the end zone for a touchdown with 1 minute, 17 seconds remaining. A tipped 2-point conversion pass was good to Jack Patterson to tie the game.

Buck caught an 8-yard pass in overtime to make it 20-14 Orono. He entered the game leading the state in receiving yards. Spartan Joey Tilzer intercepted St. Louis Park (2-4, 1-3) quarterback Aaron Ellingson on the Orioles’ overtime possession to end the game.

The first half was a defensive struggle, as St. Louis Park led 7-6 at halftime.

Ellingson completed a 22-yard touchdown pass to McCabe Dvorak on fourth down to give the Orioles a 7-0 lead in the first quarter. Orono responded with a drive capped by a 1-yard run by Prentice. The 2-point conversion failed, and the Spartans trailed 7-6 with 8:20 left in the second.

Prentice finished 22 of 30 for 233 yards passing, two touchdowns and a 2-point conversion pass. Buck had 10 catches for 111 yards and two touchdowns. 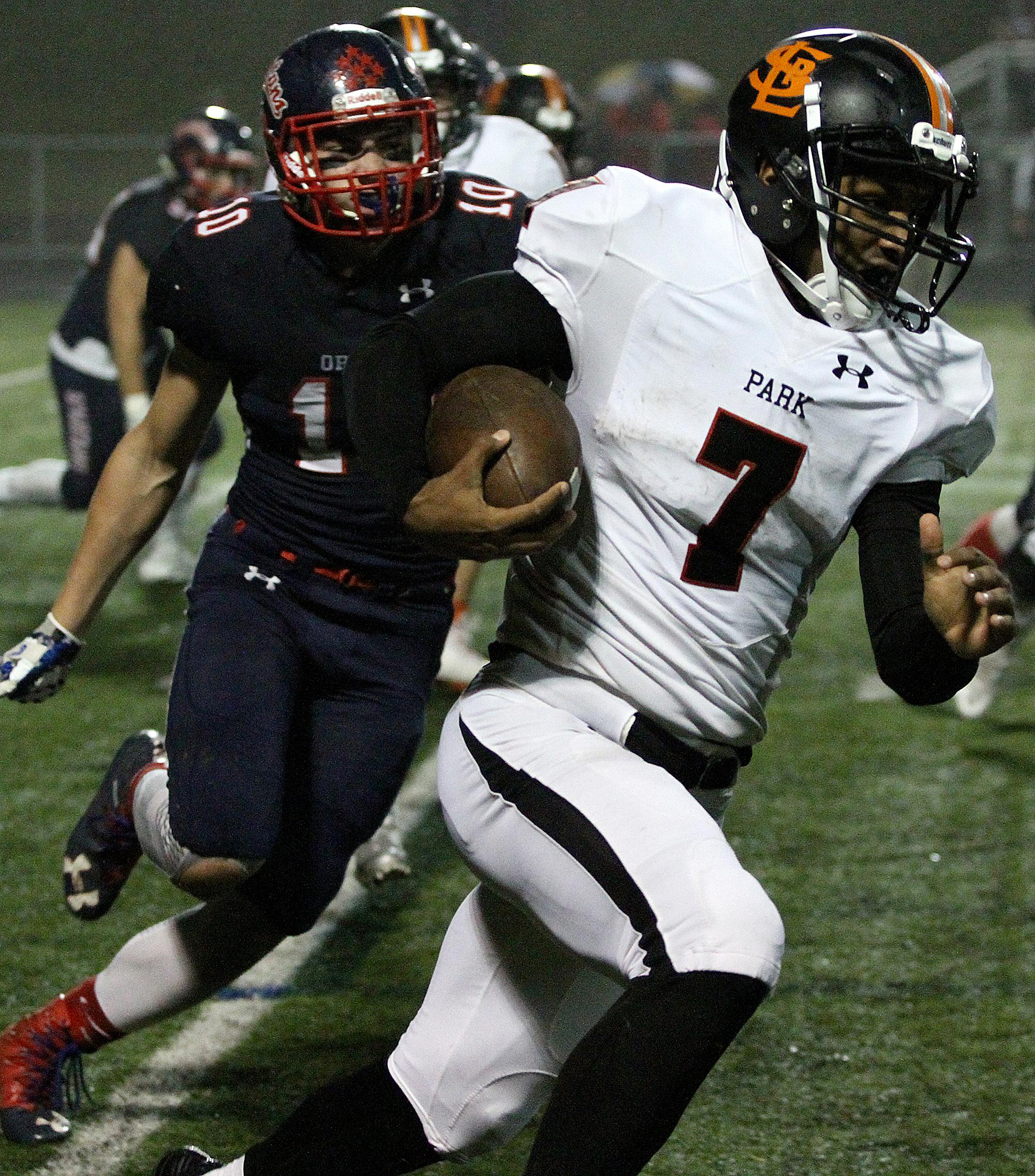