The Raiders defense was opportunistic, forcing four turnovers and holding the Royals defense to 28 yards rushing. 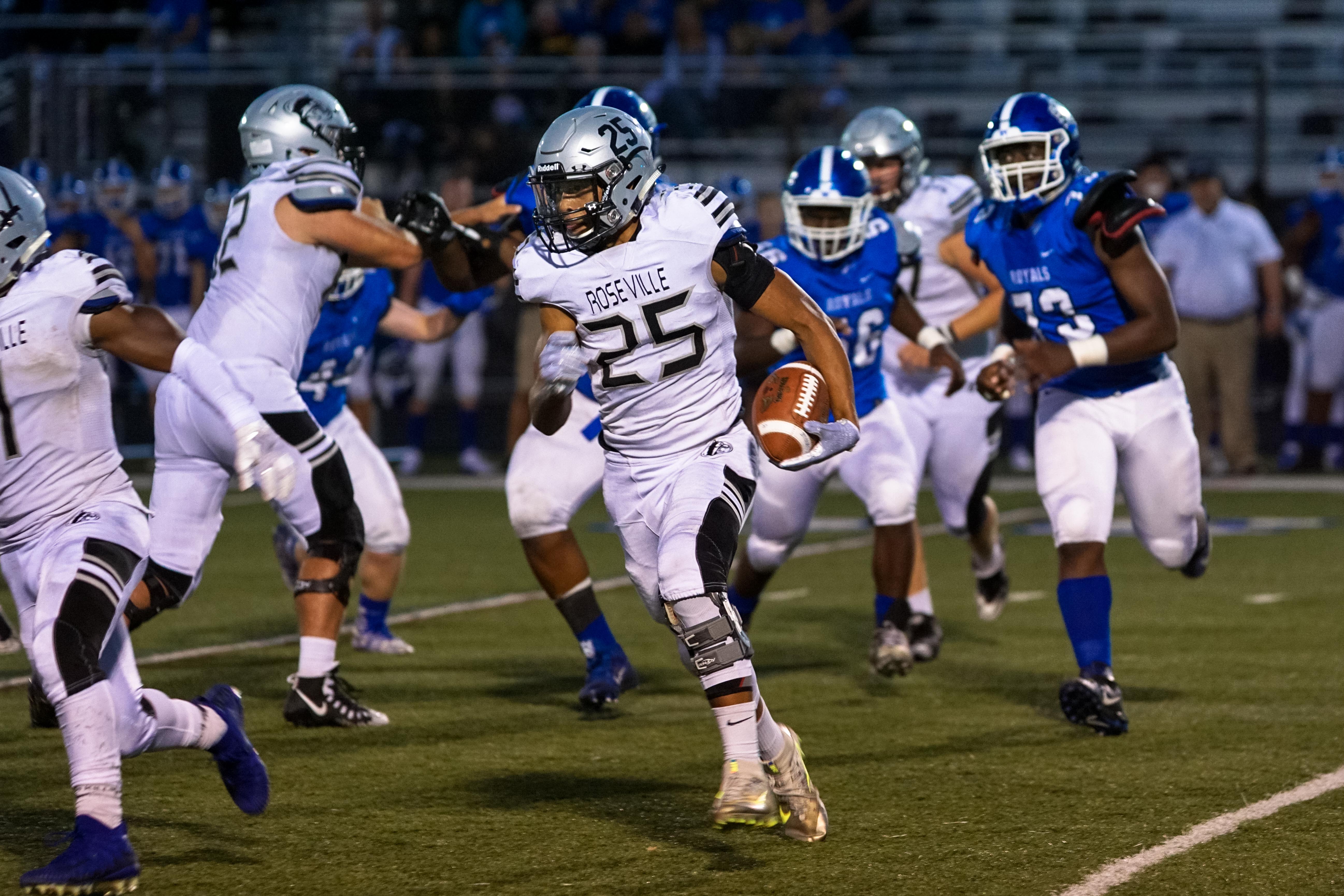 Roseville running back Anthony Weldon turns the corner on his way towards a 78-yard touchdown during the Raiders' explosive second quarter. Photo by Korey McDermott, SportsEngine

Few things pump up a team like seeing a lineman score a touchdown.

So when that happened for Roseville in a 27-7 Metro East subdistrict win at Woodbury Friday, it was all the Raiders needed to continue their early season defensive dominance.

Roseville senior defensive lineman Christen Hurt rumbled in from 1 yard out for a touchdown in the second quarter, and afterward, helped the Raiders shut down a Royals offense that had exploded for 49 points the week before. Through two games, both on the road, Roseville has allowed just one touchdown to each opponent -- both in the fourth quarter.

“We felt great,” Hurt said. “We’ve just been playing together. Everybody’s doing their job. If we just come together, we can do great things on this football field, against anybody we’re up against.”

Roseville’s first scoring drive was capped by Hurt’s touchdown, the second carry of his career — the 6-foot-1, 285-pounder said he got a carry in a similar situation last postseason, but didn’t score. This time, he helped put his team up 7-0 on the first play of the second quarter.

“I felt great,” Hurt said. “I was standing by coach on the sideline, we were on the 1-yard line. He was like, ‘Give it to Christen, give it to Christen.’ I got so excited. I just had to focus up and put it in there.”

“You get a big guy the ball like that and they get excited,” Simdorn said. “I think the emotion picks up the whole team and we just feed off it. Good to get him in there, those big boys work so hard and get so little glory. To get him in the end zone, that was special.”

Woodbury rushed for 346 yards in Week 1 against Farmington. Roseville held the Royals (1-1, 0-1) to 28 yards on 25 rushes, although one play was a fumbled snap that went for a loss of 27. Woodbury quarterback Jake Wenzel and tailback Brock Rinehart combined for 35 yards against Roseville, a week after they put up more than 200 between the two of them.

“The defense, just lights out the way they’re shutting teams down, giving us good field position,” Simdorn said. “They had a pick-six last week called back also, so they’ve really scored twice each week. I don’t know if we can keep that up all year. It’s a good group of guys.”

Simdorn said Anoka, Roseville’s Week 1 opponent, played pretty basic offensive sets. He expected a tougher match against a Woodbury team with explosive athletes, and got it. But the Raiders’ ability to limit the Royals’ run game and force third-and-long situations went a long way to helping the overall defensive effort.

Roseville sits at 2-0 and 1-0 in Metro East play, and has a pair of decisive results to build off. Offensively, the Raiders have explosive potential — Weldon had a 72-yard touchdown run Friday — to keep teams honest. And the defense gives them field position and so far, turnovers are helping that cause.

It’s the kind of start that has the Raiders eager to keep going.

“We’ve just got to stay intense, keep coming,” Hurt said. “Every down, we’ve got to be sideline to sideline. Coach preaches that to us, we’ve just got to bring it every game.” 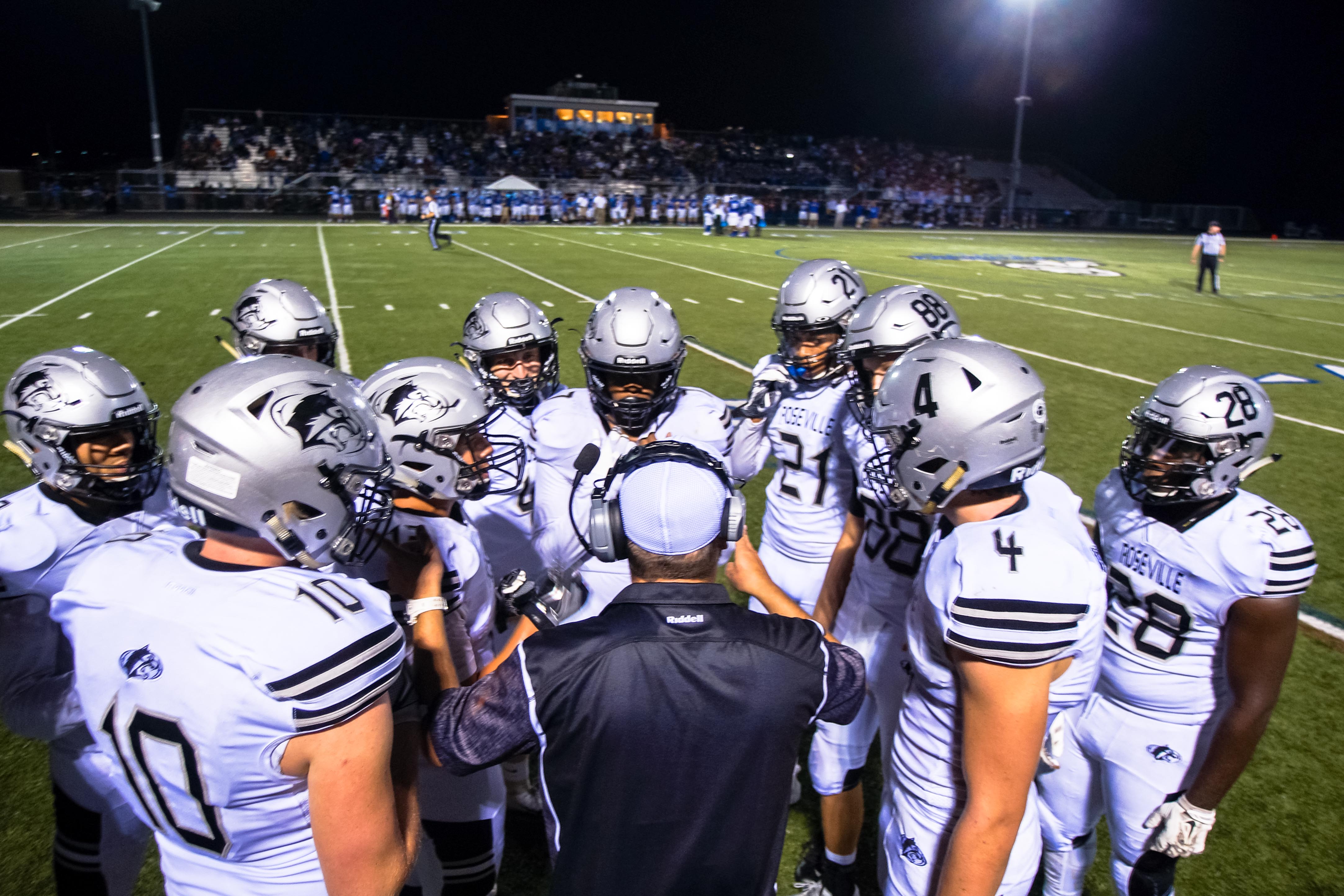 Roseville running back Anthony Weldon turns the corner on his way towards a 78-yard touchdown during the Raiders' explosive 20-point second quarter. Photo by Korey McDermott, SportsEngine

Through two games, Roseville’s defense has yet to back down. The Raiders went on the road and stymied Woodbury, a Metro East subdistrict opponent, to win 27-7 Friday night.

The Raiders allowed just seven points in their opener against Anoka, and followed that with another stifling effort against the Royals. Roseville (2-0, 1-0) forced two turnovers and held Woodbury (1-1, 0-1) to 28 rushing yards after they ran for nearly 350 yards in Week 1.

Roseville scored 20 points in the second quarter. The Raiders finished a long drive with a 1-yard run by defensive lineman Christen Hurt, who lined up as a fullback and took a handoff with 11:56 to play in the quarter. Zeb Kauth intercepted Woodbury’s Jake Wenzel for a 6-yard touchdown with 6:45 to play in the second, and Anthony Weldon took a jet sweep around the left end for a 72-yard touchdown run with 43 seconds remaining before halftime, giving the Raiders a 20-0 halftime lead.

In the second half, a stout defensive stand and good punt return set up Woodbury’s first touchdown, which was capped by a 2-yard run by Drew Pearson. The Royals were within 20-7 with 9:22 to play in the fourth quarter.

Woodbury’s Jenaro Wathum-Ocama intercepted his second pass of the year in the second quarter, and Pearson finished with six catches for 60 yards and three carries for 6 yards and a touchdown.

Wenzel was 13 of 28 passing for 123 yards and three interceptions. 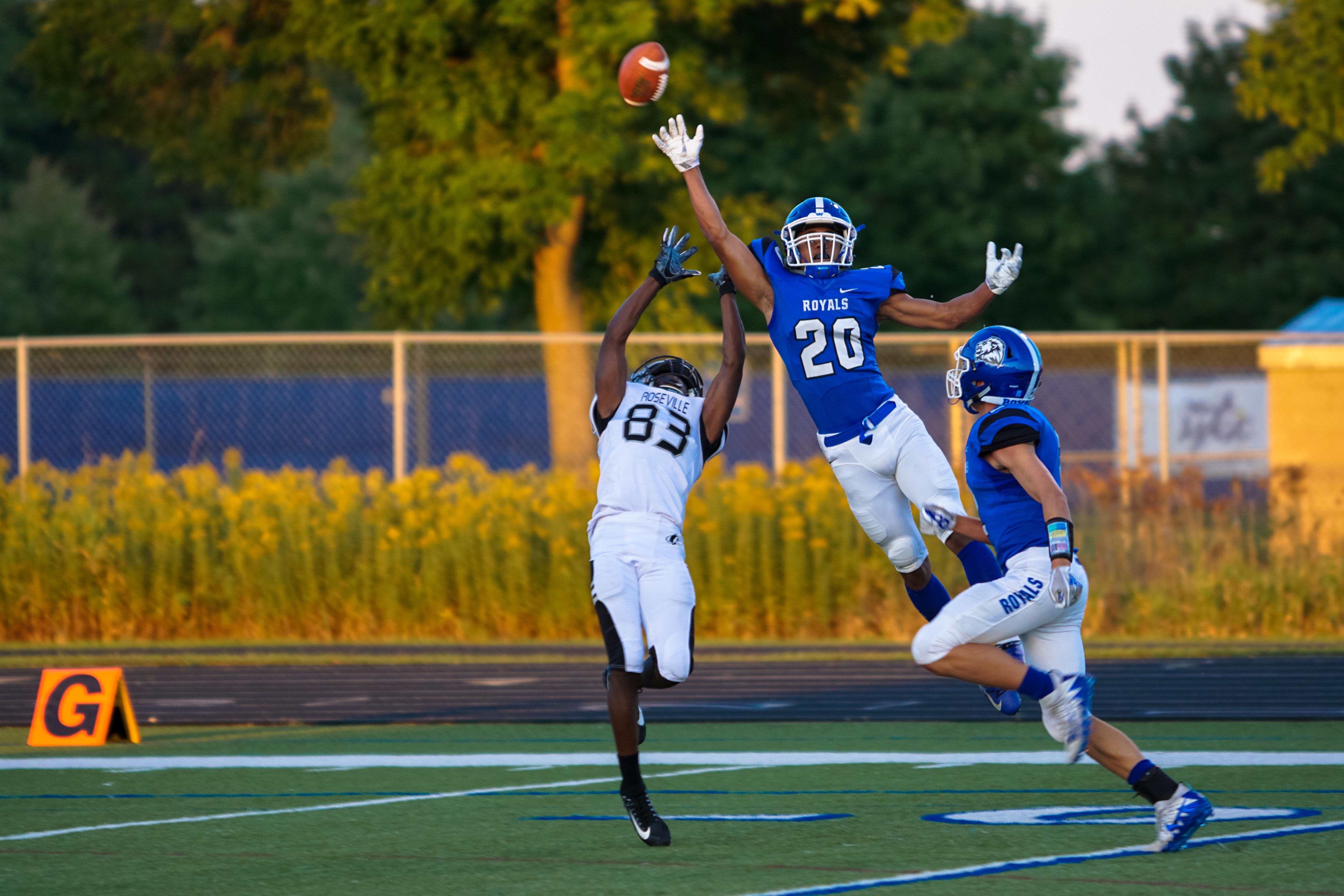