Prep football fights back to stem drop in numbers

‘Times have changed,’ said one coach of safety concerns and sport specialization that drain would-be players before they ever reach high school. ‘Just sending home a sheet of paper doesn’t work anymore.’ 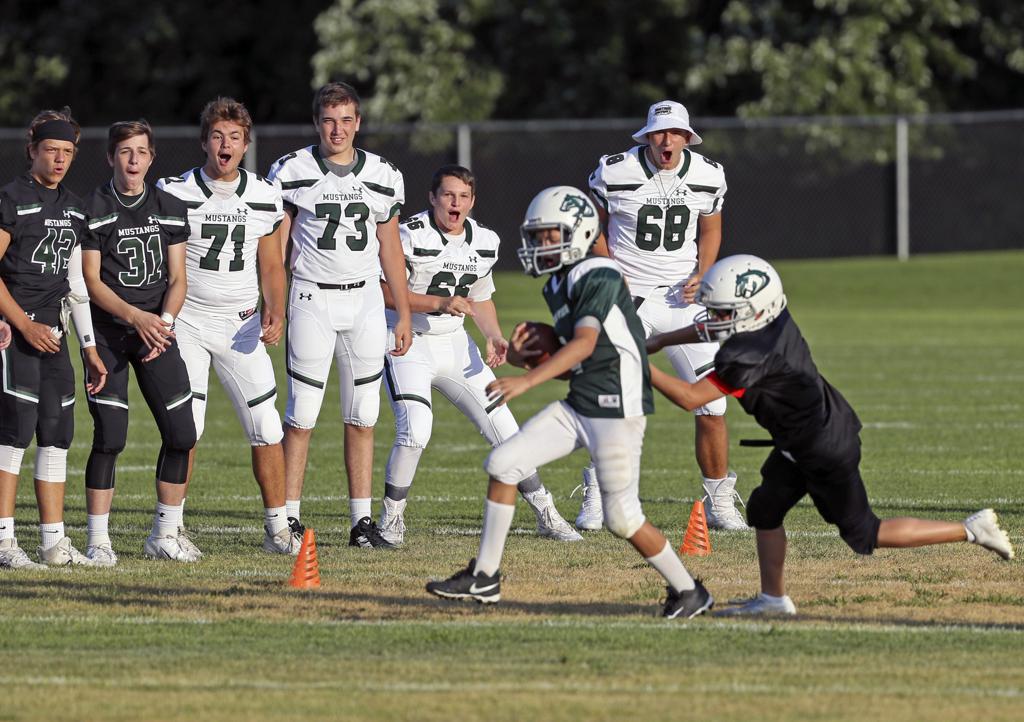 About 300 players representing Mounds View football’s present and future, from high school seniors to third-graders, smiled for a group photo last week at midfield of Mustang Stadium to punctuate the first Green and White Night.

Afterward, many youngsters sprinted through the north end zone toward a row of tables, to be among the first in line to get varsity team posters and trading cards signed. Varsity players, clad in white or black jerseys with green numbers, jogged behind, smiling. Once at the tables, some shared fist-bumps to help make the kids’ night even more special.

Parents looked on from the sidelines or from the bleachers, some munching on dinner purchased from one of the four food trucks brought in for the occasion.

These are small ways, coaches throughout Minnesota believe, to regain ground in the battle to improve lagging turnout for the state’s marquee fall high school sport. No longer taking participation for granted, coaches are fighting back against safety concerns and sports specialization, the two biggest factors sapping away would-be players before they get to freshman year.

Mixing social media branding with community events such as Mounds View’s Green and White Night, plus greater involvement in youth organizations and ramped-up game-night hoopla, varsity coaches are more intentional than ever about recruiting and retaining players.

“There is a sense of pride,” said Mustangs coach Aaron Moberg, who graduated from Mounds View in 2003. “This is our sport and we have to defend it.”

A closer look at the program’s feeder system showed what Moberg called a “three-year consecutive lull” in participation numbers. That lull now affects the varsity ranks at the suburban Ramsey County school, which appeared in seven state tournaments from 2000 to 2010. The Mustangs will dress about 132 players in grades nine through 12 this season, down from 153 last fall.

“It’s not as predictable as it once was,” said Bob Madison, former Mounds View activities director who now oversees football as a Minnesota State High School League associate director. “You can have a healthy program, but one or two classes with lower numbers can change that.”

Concerns rose for Moberg, in his second season as head coach, last year when the eighth-graders couldn’t field a team. This fall, fellow Class 6A programs Anoka and Centennial each have about 30 sophomores, down from the 40 to 50 they typically dress. As a result, Anoka won’t have a sophomore team this season. Centennial, meanwhile, is considering a modified sophomore schedule to reduce wear and tear.

Coaches at most schools, inside and outside the metro area, are feeling the same strain. Anoka’s Jeff Buerkle and Centennial’s Mike Diggins said large freshman classes should resolve their issues. But both are taking steps through recruiting and social media promotion to avoid future setbacks.

Centennial strengthened its Twitter game with a summer spotlight on its senior class, featuring graphics, action photos and player testimonials to their program and the sport of football.

Anoka coaches met throughout the offseason and found 57 areas where the program could make changes or improvements. Committees were formed and biweekly meetings were held. The resulting “Bigger Than One” brand and after-school recruiting brought 15 new faces.

“For many years we didn’t struggle with numbers,” Buerkle said. “When it happened, we needed to re-look at how we were doing things. Times have changed. Just sending home a sheet of paper doesn’t work anymore.”

In 2015, when Kevin Arnold began coaching his son’s third-grade team in the Mounds View Football Association, he looked at the number of classrooms at local elementary schools and figured 100 kids would show up.

“Concussions was a big question but also this idea that, ‘I can wait until high school to play,’ ” Arnold said. “So our whole goal became getting kids to try football. And fliers and signs don’t work. Parents want to meet you and know they can trust you.”

So the charismatic and passionate Arnold, along with Jason Johnson, his top recruiter, made themselves community staples. Baseball practices. Basketball practices. Everywhere they went, the duo promoted giving football a chance.

“We know about 95 percent of the other youth coaches, and they supported us,” Johnson said. “Some of the parents would smile and say, ‘Here come the football guys.’

“A lot of them will shut you out and that’s fine, we still wanted to plant that seed,” Johnson said. “A couple of months later we’d ask again.”

Their efforts expanded those 23 third-graders into 51 sixth-graders this fall.

The Green and White Night was made possible through Moberg’s growing partnership with the youth association. Whereas a high school coach might have once made occasional appearances at a youth football board meeting, Moberg sits on the board.

Johnson said partnering with the varsity program for Green and White Night produced another recruiting tool.

“There are already some kids I know whose older brothers don’t play but are here and I’ve heard a few say, ‘That was cool. I think I want to play football now,’ ” Johnson said.

Vossen said he watches at least one game at every level each year as a recruiting tool. Those efforts are critical to improving the varsity program’s health. The Panthers, a perennial 6A power, have 146 players in grades nine through 12, the “lowest number in as long as I can remember,” Vossen said.

Beyond promoting the game and making connections in the community, coaches in the survey mentioned starting younger players with flag football and progressing to modified tackle to traditional tackle. Those steps help send a message that football is being taught and played with safety at the forefront.

Vossen said Lakeville introduced TackleBars this season, allowing players to wear helmets and shoulder pads and block. The bars, attached to a harness, replace flags and remove tackling — and many chances for injury.

At Green and White Night, Arnold worked with fifth- and sixth-graders in a drill to teach making contact with an opponent using their shoulder rather than head-on. “I want your helmet to be safe,’’ Arnold said.

Mounds View senior Rowan Morgan, a defensive end and fullback, joined his teammates at the autograph tables. He almost missed his chance.

Morgan began playing football in third grade but left as a sophomore to focus on wrestling. He returned, something athletes who concentrate on one sport often don’t do.

“Football is a great way for kids to make friends, and I think it’s important, socially, in high school,” Morgan said. “It’s a lot more than just a great sport. It’s about camaraderie.”

“With some of these kids you hear, ‘I was told by a coach at a clinic that I could be a Division I player,’ ” Diggins said. “Yeah, I’d say that, too, if I was charging $4,000. There’s a lot of pressure from outside people making money off them.”

In Mounds View, Arnold works with the hockey programs to ensure that their tryouts don’t overlap with football games. Coaches try to accommodate, too. Diggins said he didn’t fuss when a top wide receiver missed summer workouts in favor of basketball opportunities. Whatever it takes to keep kids coming back in the fall.

“We’ve always bent and said, ‘You can miss whatever you need to, just please come back,’ ” he said. “Now, it’s like, enough. We’ve given so long that we’re getting squeezed out.

“Football is a great game, and we don’t need to apologize. It’s time to celebrate the kids who want to play. That will make others want to come back.”