The Eagles gave up only 72 passing yards to Minnetonka after halftime. 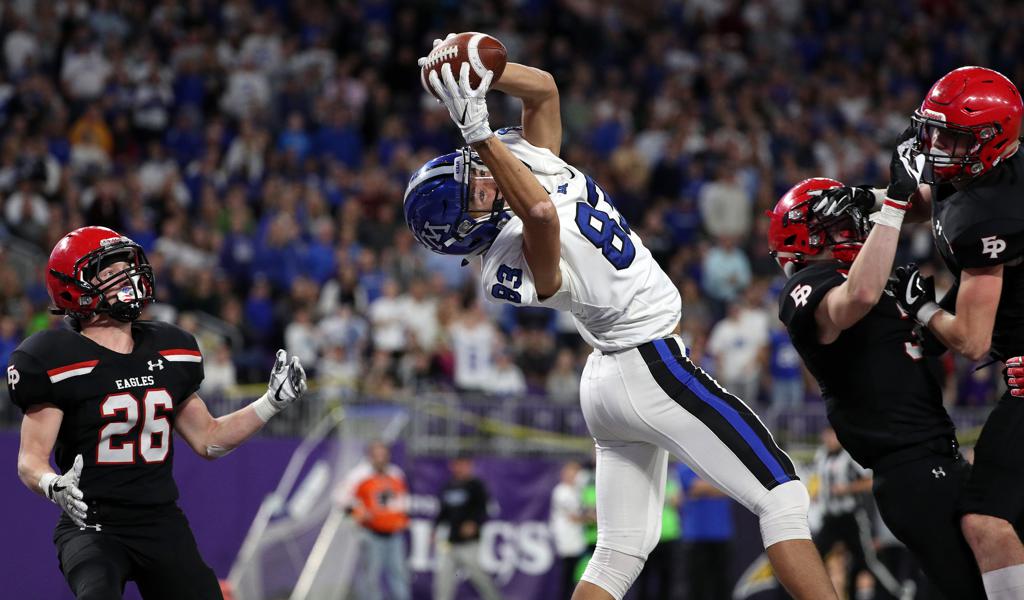 Minnetonka trailed 24-10 against favored Eden Prairie late in the first half Friday, hushing Skippers football fans while neutral observers crowed “Told ya’ so.”

Eden Prairie rode into the Class 6A championship game with a 10-2 Prep Bowl record, one built by skill, strength and speed and bolstered by good fortune. Minnetonka manufactured a little magic of its own with three seconds left before halftime.

Quarterback Aaron Syverson took the snap and darted left to give his receivers time to sprint 40 yards to the end zone. Then Syverson, a righthanded quarterback, cocked and fired the ball toward Jackson Owens as time expired.

In a crowd of Eden Prairie defenders, Owens leapt and made the catch. Touchdown. U.S. Bank Stadium came alive. Television viewers had something to talk about at halftime. 24-17. Ballgame.

“I knew I was going to Jackson the whole time,” Syverson said. “He’s got the best vertical [jump] on the team, probably.”

Better ups might have given Eden Prairie defensive back Caden Fey the interception.

“It was a play I should have made and I take full responsibility for that,” Fey said. “I saw the ball and got excited, jumped and it went over my head.”

Both Syverson and the Eagles’ defensive backs readied for a second-half battle. Round 1 went to the quarterback, who went 12-for-16 in the first half for 199 yards and two touchdowns. Fey, who lauded Syverson as the best quarterback his defense has faced, remained confident.

“We let them make that big play and it’s just about coming back from that,” Fey said.

Eden Prairie lost safety Benny Sapp III, who committed to the Gophers, in the regular season. On Friday the secondary regrouped once more. Fey, Jack Tuttle, Kyler Kluge and D.J. Johnson limited Syverson to just 72 yards in the second half on 11-for-17 passing.

Limiting Syverson meant taking away his legs. Eden Prairie coach Mike Grant said Syverson is most dangerous when “breaking containment and making big plays.” In the quarterfinals against Prior Lake, Syverson scrambled left on fourth down and found Owens for the game-winning touchdown.

“It’s hard to stay positive on that play,” Eden Prairie linebacker Antonio Montero said. “But the senior leaders stepped up and just said, ‘Next play.’ ”