Minnetonka football makes a mission to bring back 'brotherhood of trust' 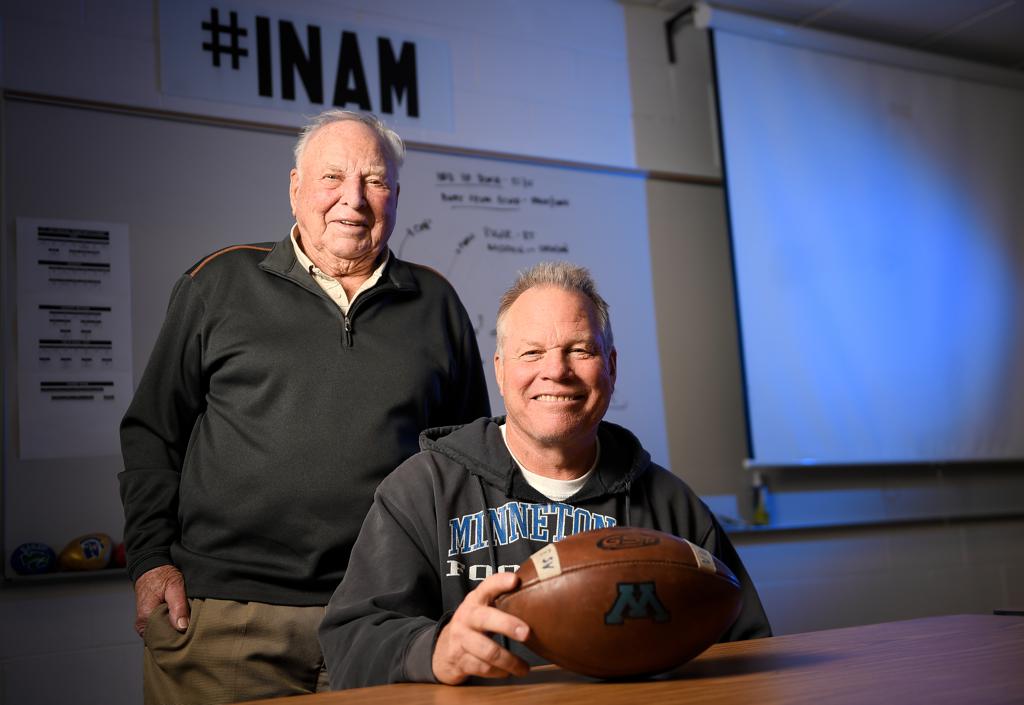 Tokens of a football program culture change at Minnetonka, a reboot that fueled the Skippers’ run to Friday’s Class 6A Prep Bowl, surround coach Dave Nelson inside the team room.

Above plays diagramed on a dry-erase board is a sign reading #INAM, an acronym borrowed from Union High School in Tulsa: It’s Not About Me.

“We didn’t have a very good culture here in 2014 and 2015,” Nelson said. “Quite a few players maybe thinking too much about what’s in it for them.”

The Oklahoma visit also inspired Nelson to install a chart listing the program’s values, behaviors and outcomes. #INAM reminds players to think and act selflessly, which produces what he called “a brotherhood of trust.”

Listening intently is Stan Nelson, 97, Dave’s father and coaching idol. Asked if he went to similar lengths while coaching at Anoka from 1953-78, the elder Nelson laughed.

“Heavens, no. I’m just sitting here spellbound,’’ he said. “Our kids came on bicycles. They didn’t have cars and all these problems.”

The teams met earlier this season, a 39-21 Eden Prairie victory that offered Minnetonka hope for the rematch.

“They are very good at what they do, and they don’t deviate,” Nelson said. “But I think it helped to see that, physically, we belonged.”

Redemption is on both teams’ minds. Eden Prairie fell in the Prep Bowl to Totino-Grace last season while Minnetonka began to see the fruits of its culture change. Nelson challenged players this season from the outset. On their lockers, he hung black T-shirts with a blue question mark on the chest. The message: How would they build on the foundation?

Team-building looked much different in the early 1970s when Dave was an offensive lineman for Stan’s Tornadoes.

“Back when I played for you, two-a-days was a team-building deal,” Dave said to his father. “It was grueling. You’d go to sleep that night going, ‘Geez, I don’t know if I can make tomorrow.’ ”

“Looking back now, we were so stupid,” Stan said. “But all the coaches did the same thing. You don’t take your helmet off for two hours, you don’t have a drink of water for two hours. This was going to make you tough.”

However primitive, the approach worked. Almost a decade before the state adopted a playoff system, Anoka won the 1964 “mythical” state championship as chosen by Ted Peterson of the Minneapolis Tribune.

A bigger honor came this fall. Anoka made Sept. 29 “Coach Stan Nelson Day” to honor his life’s work as a teacher and coach. Watching his father all those years steered Dave Nelson toward coaching.

“We had won a big game at Park of Cottage Grove and my dad ran in the locker room and he just jumped up in the air and we all caught him,” Dave said. “And I’m thinking, ‘This guy is almost 60, how did he know we were going to catch him? What would’ve happened if we hadn’t?’ Just the joy he had. I don’t know what other jobs where you can do that.”

“I’ve followed Dave’s career pretty closely, and I can’t imagine the time and work he puts into having a good program and giving kids the ultimate experience,” Stan said.

Friday marks Dave Nelson’s sixth Prep Bowl appearance, this one coming 13 years and one successful battle against prostate cancer since the last one. There’s good reason to bask in his good fortunate and the longevity of father and son.

But for Nelson, #INAM.

“There’s a special bond with these players and coaches,” Nelson said. “You don’t get it every year, and we have it.”

Mike Grant, who played college football under John Gagliardi at St. John’s, served as an assistant coach for two seasons (1980-81) at Minnetonka.