Prep Bowl memories: Will this year top any of these classics? 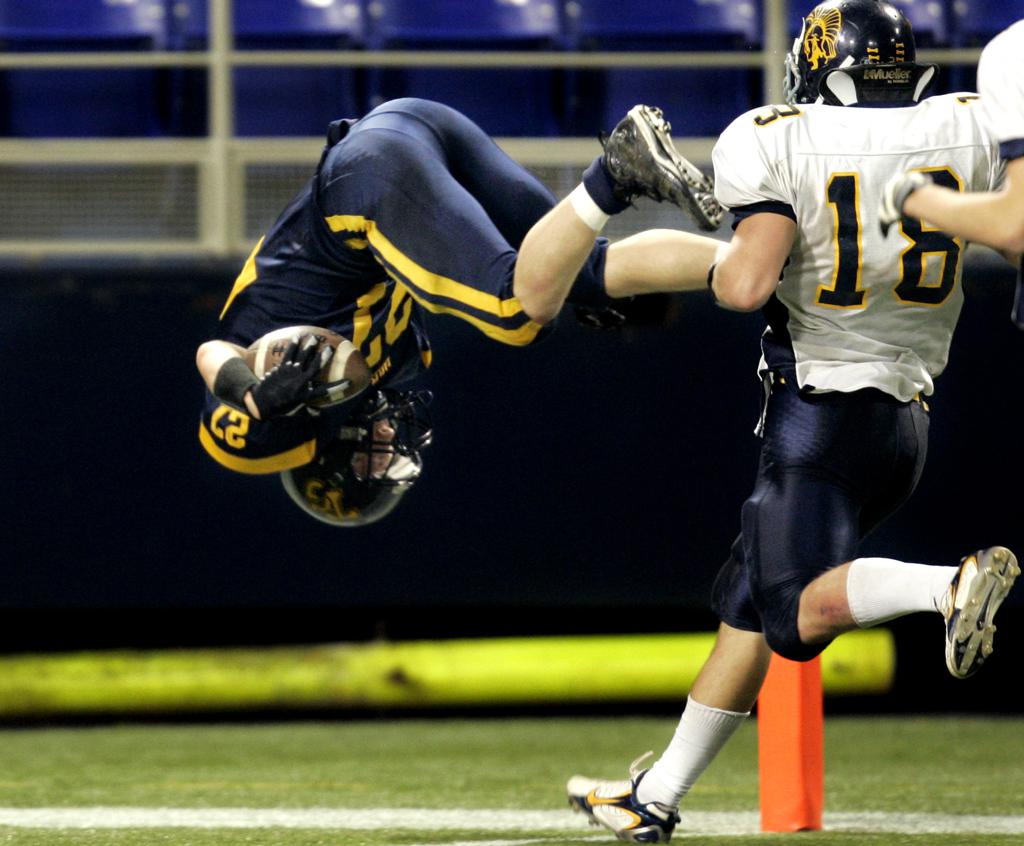 In last weekend’s state semifinals, one team rushed for 700 yards and another’s quarterback threw seven touchdown passes. This Friday and Saturday there are seven Prep Bowl championship games set to create memories for players, coaches and fans. Perhaps some of those moments will crack these short lists of favorites of Star Tribune high school sportswriters Jim Paulsen and David La Vaque.

Flip for the ages

One of those “I can’t believe what I just saw” moments. Totino-Grace had led Mahtomedi for most of the Class 4A final in 2007, but the Zephyrs took a late 8-7 lead. Just 10 seconds remained. The Eagles were 50 yards away. Quarterback Jordan Marshall’s pass intended for Jake King was tipped once, then again, before landing in the hands of Micah Koehn. He slipped a tackler, tight-roped down the sideline and did a front flip into the end zone as time ran out, giving Totino-Grace a miraculous 13-8 victory. A guy who wasn’t even supposed to be in the area made one of the most memorable plays in Prep Bowl history.

Call it a metaphor for Minneapolis North’s first Prep Bowl appearance. The Polars had gone toe-to-toe with a punishing Minneota team in the 2015 Class 1A matchup. North trailed 20-18 just seconds before halftime when Tyler Johnson, now a Gophers wide receiver, intercepted a pass at the Polars’ 20 and began to weave his way downfield. Johnson had been nearly unstoppable in the game to that point, playing both ways. But after appearing at first destined for the end zone, Johnson wore down and was tackled at the Minneota 17-yard line. The Polars never regained their momentum and as Minneota pulled away for a 35-18 victory.

Osseo was 3-3 in the 2015 season after losing three games in a row. Then-head coach Derrin Lamker simplified things and leaned on his most talented players. Six victories later they reached the Prep Bowl. Trailing East Ridge 13-7 in the fourth quarter, Osseo embarked on an epic 16-play, 71-yard drive. Running back Prince Kruah, who had carried the ball 35 times, took it eight more times, most of them to the right side of the line. On his last carry he scored on a 4-yard run with 24 seconds left, lifting the Orioles to a 14-13 victory and their first state title.

Downhill running at its best

Mitch Underhill of Wayzata might have been a better Alpine skier. In the 2010 Prep Bowl, the sophomore running back made Rosemount’s defense resemble gates as he repeatedly slalomed past. He carried 12 times for 247 yards and touchdowns runs of 45, 66, 58 and 58 yards, with the last three coming in the third quarter of the Trojans’ 31-14 romp in Class 5A. “When I see an open field, I’m going to run as fast as I can and go as hard as I can,” Underhill told a crowd of media on the Metrodome turf. “I’m not going to let anyone touch me.”

Alex Varney passed on Caledonia’s celebratory postgame pileup, opting to walk around the Metrodome in teary-eyed ecstasy and wrap himself in congratulatory hugs. Moments earlier, teammate Levi Schmitz booted a 24-yard field goal straight and true with no time left to give Caledonia a 25-22 victory over Moose Lake/Willow River and the 2012 Class 2A Prep Bowl title. Varney also made huge fourth quarter play. Moose Lake, leading 22-15, had turned Caledonia over on downs. But Varney intercepted a tipped ball and his 14-yard touchdown return tied the score.

For combined talent and sheer drama, the 2014 Class 6A title game at TCF Bank Stadium is tough to beat. Facing fourth-and-16 in the fourth quarter, Eden Prairie quarterback Grantham Gillard found Blake Cashman on an improvised play. The touchdown tied Totino-Grace 21-21. Eden Prairie went five-for-five on fourth-down conversions. The teams’ fortunes changed on a pair of big plays. Matt Carson’s open-field tackle turned Totino-Grace over on downs. Then Will Rains sprinted 75 yards for the go-ahead score. Totino-Grace quarterback Lance Benick cut the lead to 28-27. But his two-point conversion pass was knocked loose.

Got a favorite Prep Bowl moment? Leave it below in the comments.