There are three Hennens and two Buysses on Minneota’s current Prep Bowl team. 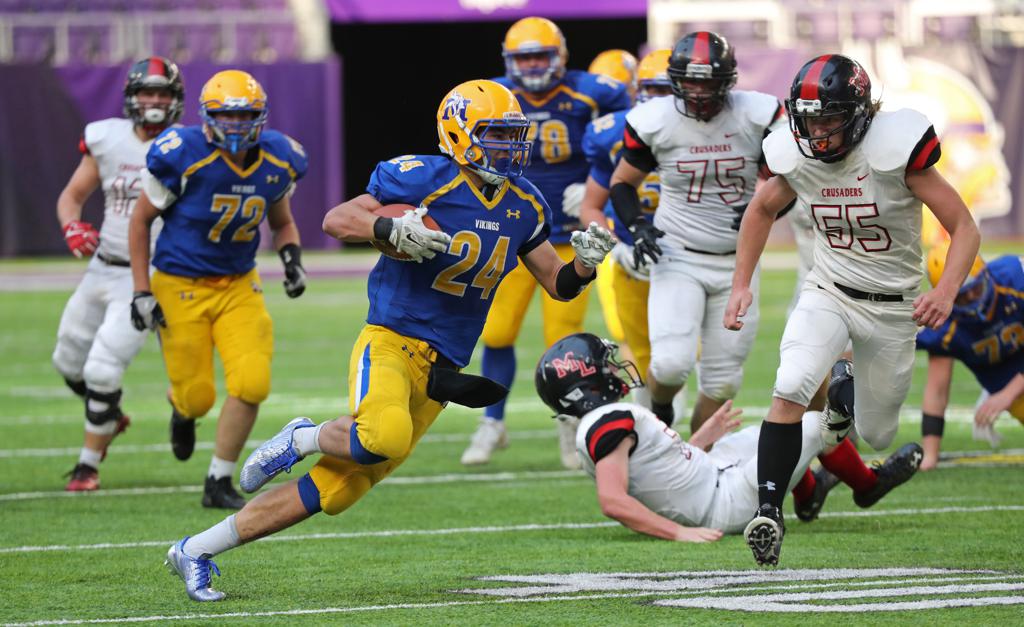 Minneota running back Isaac Hennen ran for a first down. ] Shari L. Gross &#xef; shari.gross@startribune.com Minneota led Mayer Lutheran 41-0 at the half in the Class 1A PrepBowl semifinal at U.S. Bank Stadium on Saturday, Nov. 18, 2017

Isaac Hennen was about 9 years old when the tug of kin surfaced.

He and his immediate family — mother, father, older brother Garrett — were living in Rapid City, S.D., when a grandfather became lost in the Montana wilderness. He was eventually found, but the concern generated forced Hennen’s parents to rethink their place of residence. It was time to come home, back to Minneota, in southwestern Minnesota, where Hennens are plentiful.

“They thought it would be good for us to be closer to family,” said Isaac, now a high school senior. “And there are a lot of Hennens in the area.”

As Minneota prepares for another Prep Bowl appearance, two things stand out.

One is how remarkably successful the Vikings have been in championship games: Six state titles in eight Prep Bowls, including back-to-back Class 1A titles in 2014 and 2015.

Secondly, how essential two families — the Hennens and the Buysses — have been to football success in Minneota, a town of about 1,400 people.

“I don’t think there’s been a year when I don’t have a Hennen or a Buysse on the team,” Minneota coach Chad Johnston said. “Typical small town. Lot of big families, kids stick around, relatives stay in the area.”

The 2017 Vikings have three Hennens — senior Isaac, their leading rusher and receiver, and cousins Jacob and Thomas.

It’s not just football, either. Two other cousins, Abby and Morgan, played for Minneota’s volleyball team, which finished as runners-up to Mayer Lutheran in the Class 1A state tournament earlier this month.

“It’s a pretty well-known name around here,” Isaac said. “A lot of our success come from our competitiveness. Family get-togethers can get pretty intense. Those Thanksgiving football games can go from two-hand touch to tackle pretty quickly.”

There are two Buysses on the current roster, too. Brant is a senior receiver/defensive back and his cousin, Shawn, is a junior linebacker. Many more have come before them.

“My older brother Beau was on the 2009 [state] championship team and another older brother, Austin, was a quarterback in the state finals in 2013 when we were runner-up,” Brant said. “Brock, another brother, was part of the 2014 state champions and Leo, a cousin, was on the 2015 champions.”

And that doesn’t include a contingent of uncles who played on Minneota’s three consecutive championship teams from 1986 through 1988.

Naturally, there has been some crossover between the two families. The maiden name of Brant Buysse’s mother, Rhonda? Hennen, of course.

“Football is pretty important to us,” Brant said. “It’s part of our family tradition. We’ll talk about it a lot over Thanksgiving.”

Some of that talk is good-natured ribbing among brothers about which Minneota team was the best.

“Us brothers, we’re always giving each other grief,” Brant said cheerfully. “The older guys, not so much. They just talk about what’s current and they like to give advice.”

The main topic of dinner-table conversation, however, will be the Vikings’ prospects for a ninth state title.

Prospects are good. The Vikings are physical and experienced. Quarterback Alex Pohlen is a fourth-year starter with a 49-1 record. His only loss? To Wabasso last year in the section semifinals.

That loss still stings, Isaac Hennen said. The entire team has been looking forward to a little retribution, an opportunity they’ll get Saturday when they play Wabasso in the Class 1A final.

“I still feel it to this day,” Hennen said. “That team last year, we thought we had a chance for a three-peat. Hopefully, we’ll get them back.”

While Hennens and Buysses will dot the Minneota sideline Saturday morning, many more will be in the seats in U.S. Bank Stadium.

“Basically, the whole town of Minneota is coming down,” Buysse said. “We’ll probably have, like, 20 family members there.”

It’s safe to say that if Minneota wins, a Hennen or a Buysse — probably both — will have played a major role.

“These are two good hardworking families,” Johnston said. “Sometimes, with certain names comes a work ethic that come from their background. On every team I’ve coached, they’ve rolled through and have been major contributors.”

A sampling of the more recent Hennen and Buysse kin connections.

The Hennens: Senior Isaac is the football team’s leading rusher and receiver. Cousin Jacob and Thomas are teammates, too. Isaac’s older brother Garrett holds the team record for rushing yards in a season in 2015. Garrett and cousin Kyle’s team won the 2015 state title. Cousin Cole was a key member of the 2014 state championship team.

Side out: Two other cousins, Abby and Morgan, played for Minneota’s volleyball team, which finished as the Class 1A runner-up earlier this month.

Crossing patterns: A contingent of Buysse uncles played on Minneota championship teams from 1986 through 1988. Even the two families themselves are linked: Brant Buysse’s mom, Rhonda, is a Hennen.