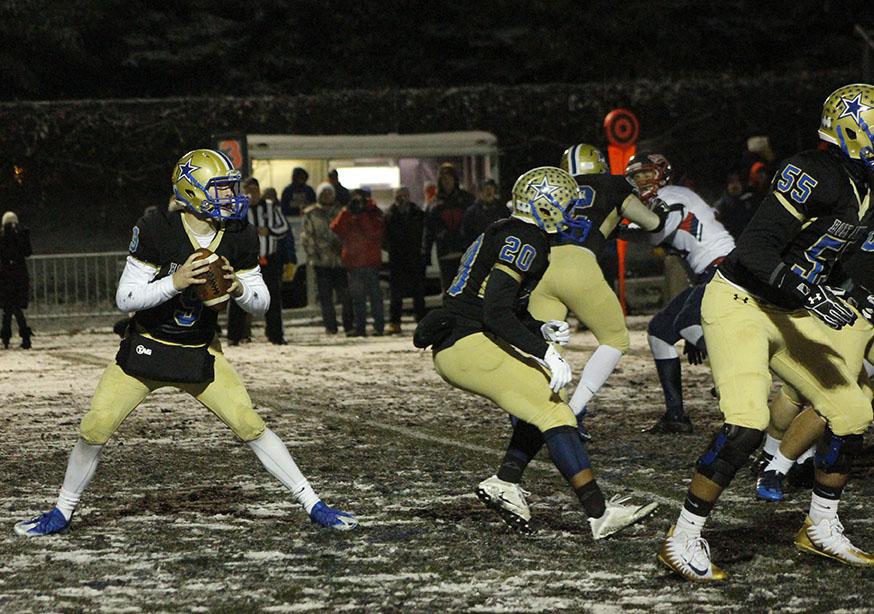 Holy Angels quarterback Joe Heimbold looks for an opening to throw the ball at the Stars' home game against Orono. The Stars beat the Spartans 35-14. Photo by Meagan Lynch, SportsEngine 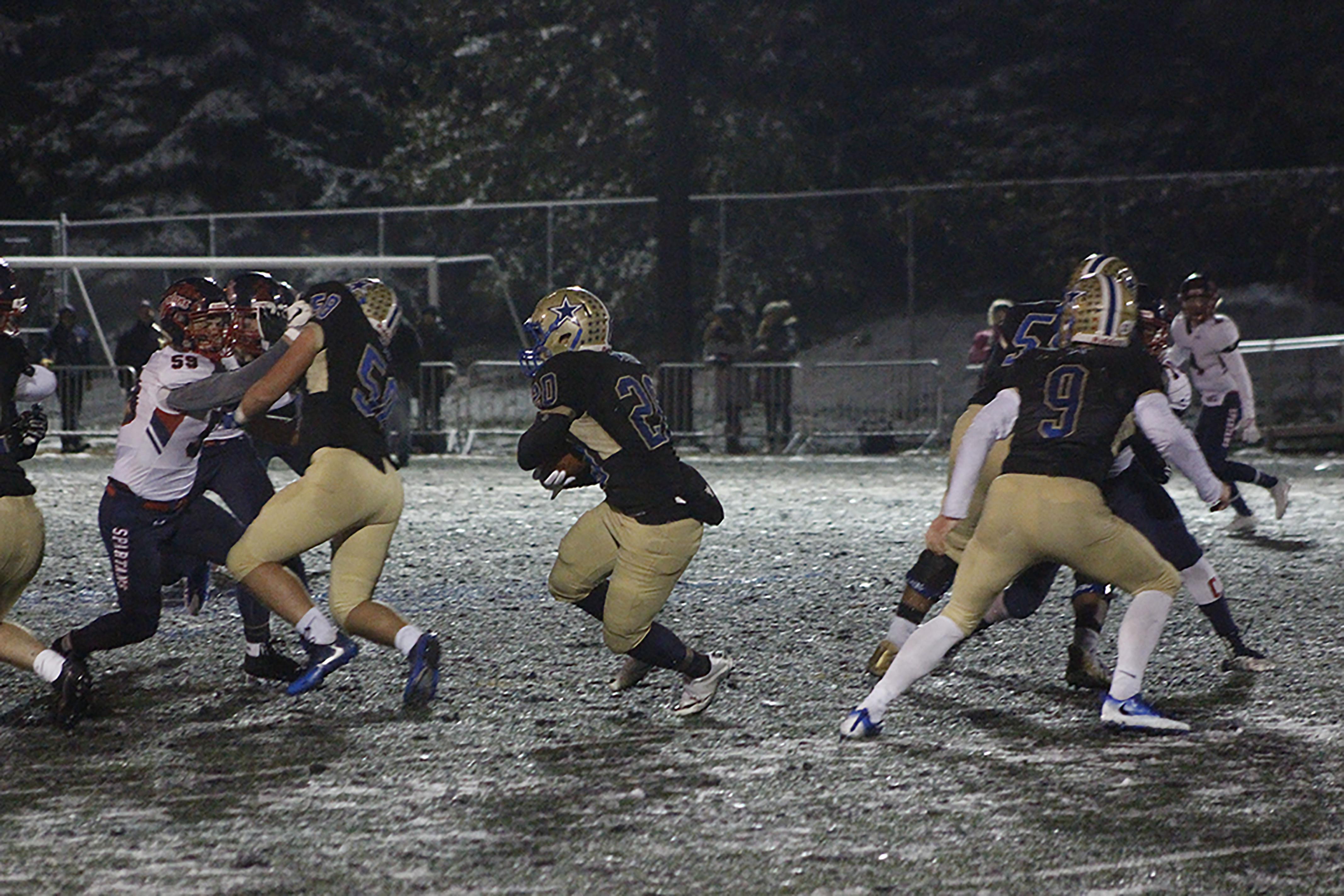 Holy Angels running back Tommy Shelstad runs the ball down the field in the Stars' home game against Orono Friday night. The Stars beat the Spartans 35-14. Photo by Meagan Lynch, SportsEngine

It was a tale of the second half in the Class 4A, Section 5 championship game as Holy Angels scored three touchdowns in the final 24 minutes to secure a 35-14 win over Orono.

“This was the players’ moment,” Stars coach Jim Gunderson said. “This is everything they’ve worked for and they provided great effort.”

The Stars, who are ranked No. 8 in the Class 4A Associated Press poll, aren’t used to being in the position they were after halftime of Friday's game. After giving up an average of just nine points per game during the regular season, they had already allowed 14 at the break. From there, solid defense made the necessary adjustments and held the Spartans off the board the remainder of the game.

Orono quarterback Nick Prentice and running back Bobby Striggow led the Spartan offense and accounted for the team's two touchdowns.

Tied 14-14 at halftime, the Stars carried some second quarter momentum into the second half. With under two minutes left in the half, a pass by quarterback Joe Heimbold turned into a bizarre fumble that bounced off another Star and ended up in the hands of senior wide receiver Peter Laird. Laird used his speed and agility to weave through the Spartan defense 42 yards to the end zone.

As the first half showed, Gunderson knew the game wouldn’t be easy. The Stars defeated the Spartans 48-7 during the last game of the season, but the Spartans then beat No. 2-4A Benilde-St. Margaret last week in the first round of the playoffs.

“We had a great opponent tonight,” Gunderson said. “Orono has great coaches and I tip my cap to them. They had an extraordinary game plan and they always have their guys playing hard through the end.”

In the absence of senior captain Jack Anderson, junior Tommy Shelstad took advantage of his chance to shine.

“I was the second or third string all year, and I knew I was going to get the chance after Jack went down,” Shelstad said. “I practiced hard and took a lot of reps because I knew I had to be ready to fill his role.”

Though Shelstad didn’t quite reach 50 rushing yards, he made his 12 carries count, scoring four of the Stars’ five touchdowns and getting the Stars on the board on the first play of the second quarter.

Shelstad’s second touchdown came early in the third to give the Stars their first lead of the game, and his remaining two extended the lead to secure the championship.

“We are a power team, good on defense, fast and intense,” Shelstad said. “For next week, we have to get better at coming out strong in the first half.”

Gunderson had praise for the way Shelstad stepped up to fill the important void.

Though Shelstad has needed to fill Anderson’s void on the field, Gunderson said that Anderson has become even more of a leader.

“I’m more impressed with how he’s handled his injury and the leadership he’s displayed since he got injured than I have been for anything else he did before the injury,” Gunderson said. “His leadership has just been invaluable.”

With the temperature hovering around freezing, snow on the ground and a section championship game on the line, Gunderson said that his players were able to overcome it, but they weren’t perfect.

The vast majority of the game’s penalty flags came in the second half, as did most of the half-dozen fumbles.

“It could be emotion, fatigue, the enormity of the moment,” Gunderson said. “It’s playoff football, and everybody is going for turnovers and ripping it out and battling for field position. The weather may have had an effect, but it’s all about execution.” 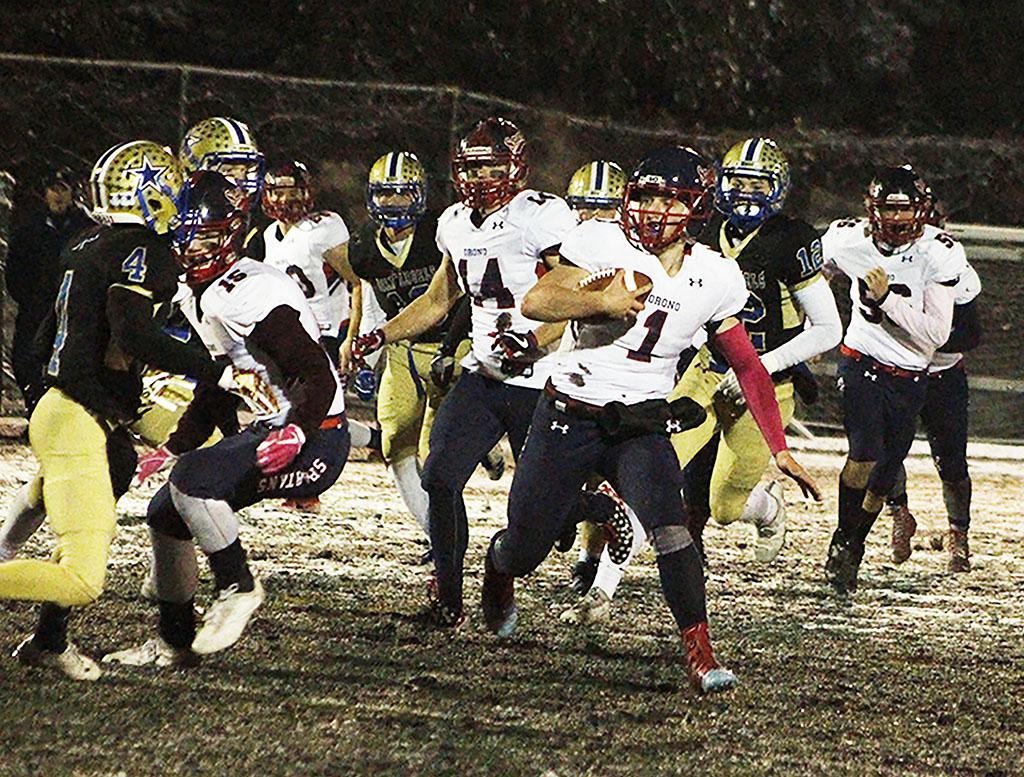 Orono quarterback Nick Prentice maneuvers across the field in the Spartan's game against the Stars at Holy Angels in Richfield. The Spartans lost to the Stars 35-14. Photo by Meagan Lynch, SportsEngine

Holy Angels scored four unanswered touchdowns in the last 26 minutes of the Class 4A, Section 5 championship to defeat Orono 35-14 Friday night in Richfield.

Junior running back Tommy Shelstad accounted for four of the Stars’ five touchdowns in the absence of injured senior Jack Anderson. Shelstad got the Stars (9-1) on the board 38 seconds into the second quarter to tie the game at 7, then added his second 1:20 into the third quarter to make it 21-14— their first lead of the game.