There’s depth at the top in Class 5A and several off-the-radar contenders in 6A. 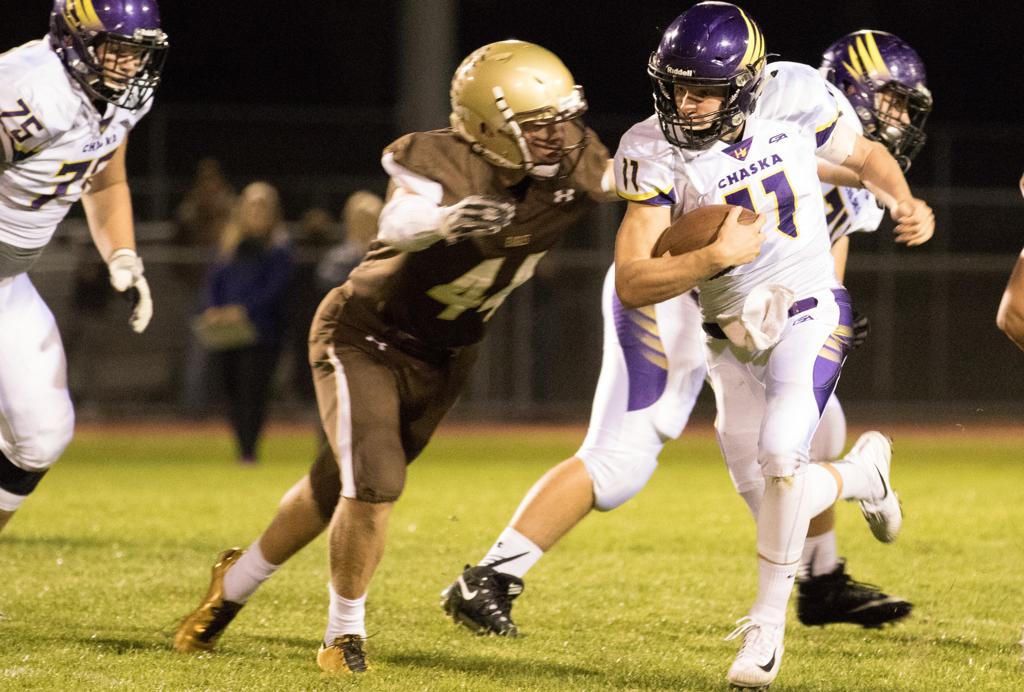 Senior quarterback Connor Souba will lead the offense as Chaska, which earned a first-round bye, makes its run at a Section 2 championship in the Class 5A playoffs.

The section football playoffs kick off Tuesday with a slate of games across Nine-Man through Class 5A. Games in Class 6A begin Friday. Some observations worth noting:

6A teams to watch

The four No. 3 seeds — Edina, Maple Grove, Rosemount and Totino-Grace — bring a mix of talent and schedule strength superior to the quartet of No. 2 seeds. In addition, three of the four No. 3 seeds are ranked among the top eight in the QRF (Quality Results Formula).

Three rematches bring an element of familiarity to the first round of the Class 6A playoffs. Shakopee shut out Eastview 17-0 on Sept. 15 and Totino-Grace blanked Anoka 12-0 on Sept. 22. Maple Grove closed the regular season with a 35-10 victory against Wayzata, meaning those teams play twice in nine days.

The regular-season schedules of four 6A teams — Armstrong, Buffalo, Forest Lake and Hopkins — could hurt them in the playoffs. All four played a largely 5A slate for various competitive reasons but now have to face bigger programs. Forest Lake won two games for the first time since 2011 but plays No. 2-ranked Minnetonka in the first round. Hopkins’ lone victory relegated it to a No. 8 seed and drew No. 3-ranked St. Michael-Albertville. Armstrong (5-3) has to play at high-powered Blaine, while Buffalo’s reward for a 4-4 campaign is a date at Lakeville North.

Two sections in Class 5A stand out. In Section 2 it wouldn’t be a shock to see any of its top three seeds — Chaska, Chanhassen and Mankato West — emerge. Section 6 lost some luster with the departure of St. Michael-Albertville to 6A but still looks formidable. Elk River, Rogers and St. Cloud Tech are the top three seeds. Osseo also looks dangerous despite its 3-5 record, thanks to having played a 6A schedule.

Since losing to Rogers on Oct. 6, defending Class 5A champ Elk River has averaged 70 points in the two games since and is on track for a rematch with the Royals in the Section 6 final. North Branch, behind an offense that hoards points, finished 6-2 and earned the No.2 seed in Class 4A, Section 7. The Vikings had five total victories from 2014 through 2016. Zimmerman, the top seed in 4A, Section 6, lost two regular-season games in 2015, one in 2016 and enter the 2017 playoffs undefeated. Its likely foe in the section finals is Delano, which won seven consecutive games after losing to Zimmerman in Week 1.

Not that it needs help, but St. Croix Lutheran’s route through the Class 3A, Section 4 playoffs looks smooth. The other five teams in the section (Breck, Cannon Falls, Lake City, Minneapolis Edison and Minneapolis Roosevelt) have a combined record of 10-32. ... Undefeated Minneapolis North looks to have a clear path through Class 2A, Section 4 as well. The No. 2 seed in the section is Concordia Academy, a team North rolled over 34-0 in the regular-season finale.