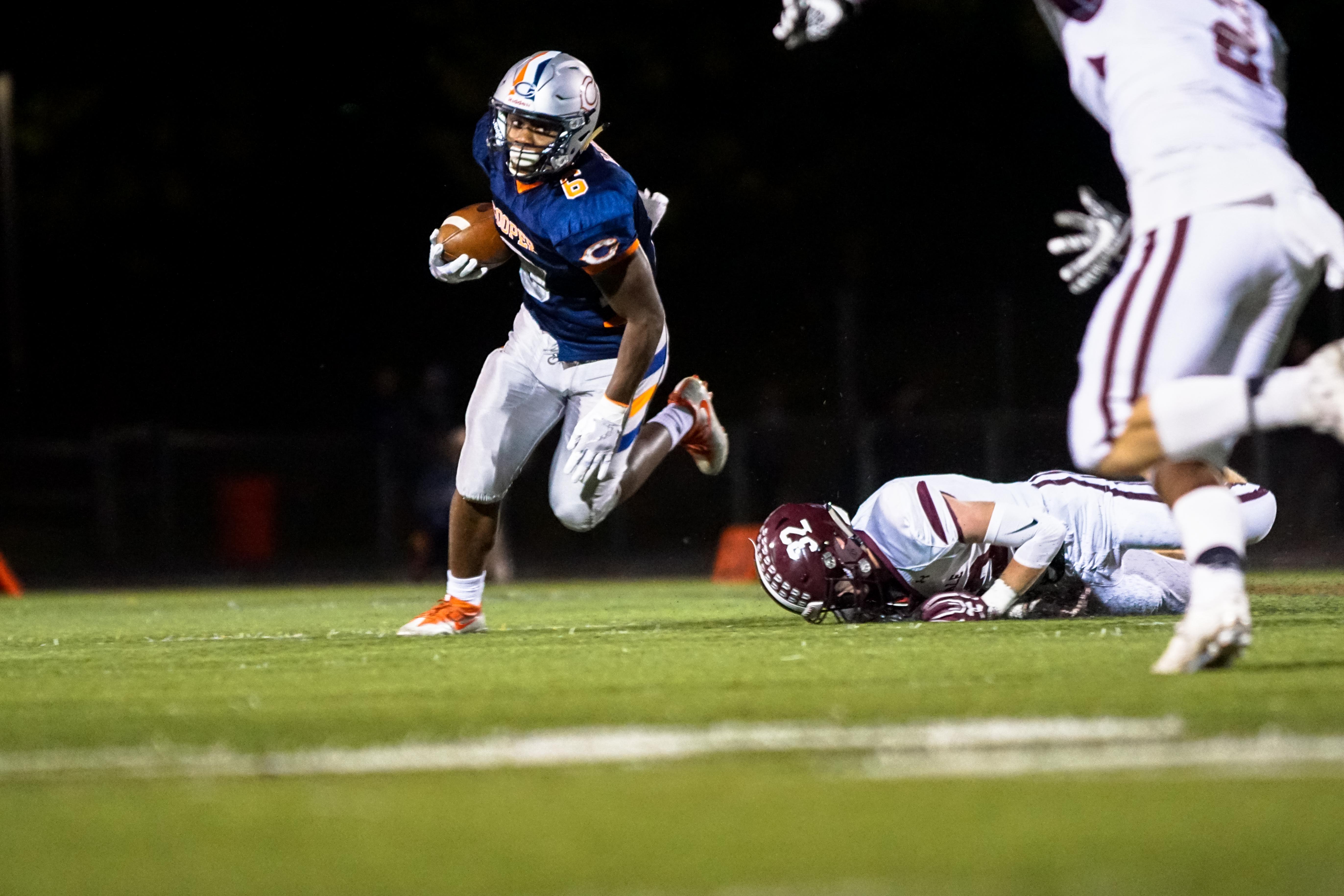 Robbinsdale Cooper's Nate Hill (6) had a 69-yard rushing touchdown in regulation and scored the only touchdown in the second overtime to beat visiting Irondale Oct 18. Photo by Korey McDermott, SportsEngine 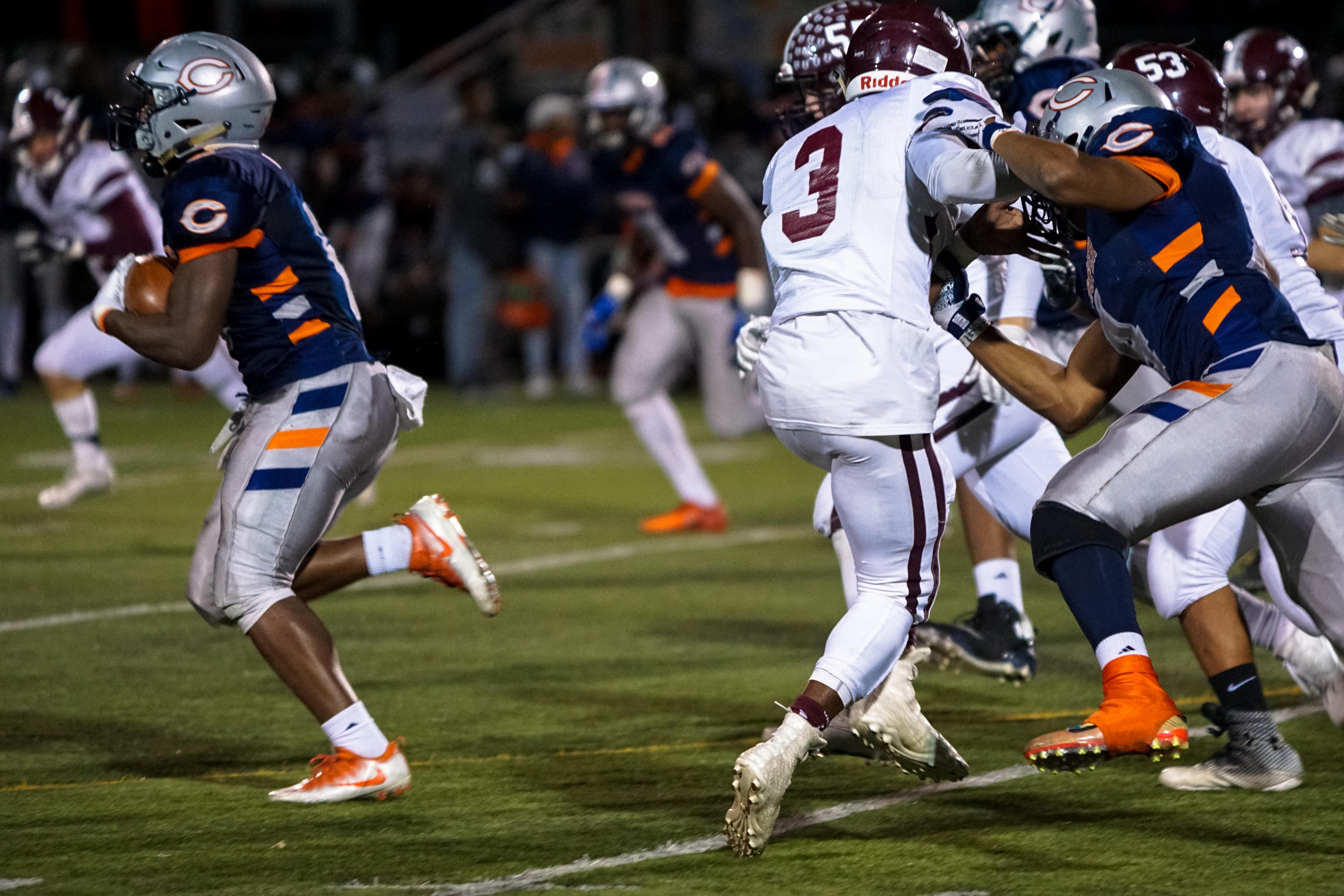 Robbinsdale Cooper running back Nate Hill (6) breaks away from the pack as he scampers for a 69-yard touchdown against Irondale Wednesday night. Photo by Korey McDermott, SportsEngine

As Robbinsdale Cooper embarked upon its final game of the regular season and a chance at 8-0, it knew Irondale would be a tough opponent that would stand in the way of the Hawks’ perfect record.

Little did Robbinsdale Cooper know, it would also have to battle the lights. During overtime, part of the stadium’s lighting system went out and forced the teams to play with significantly less illumination as the game was in the balance.

But despite those obstacles, the Hawks found a way and defeated Irondale 41-34 in double overtime at Robbinsdale Cooper High School on Wednesday, keeping its undefeated record alive while capturing the Suburban Gold subdistrict championship.

This is the second consecutive season where the Hawks (8-0, 4-0) went into the final game of the regular season with a chance at 8-0. A year ago, Robbinsdale Cooper went 7-0 before falling to Spring Lake Park in the season finale. Those Hawks lost again to the Panthers in the section final.

For Robbinsdale Cooper, which is ranked second in the Class 5A Associated Press poll, to avoid the fate it suffered in 2016, the Hawks needed big-time performances from its high-flying playmakers, which they got on Wednesday night.

It started with Robbinsdale Cooper senior quarterback Cameron King. He threw for 99 yards and opened the scoring with a 61-yard touchdown pass to junior wide receiver Pedro Amoussou.

Other players stepped up on other sides of the ball, too. Hawks senior linebacker Kevon Fryar thwarted what had been a methodical two-minute drill drive by the Knights (4-4, 3-1), intercepting a pass and taking it into the end zone in the waning moments of the second quarter.

To open the second half, senior running back Onte Burns got the Hawks going again with a 74-yard kickoff return for a touchdown.

“We’ve got some players that haven’t gotten the ball as much as they should,” said Hawks coach Willie Howard. “When our playmakers are on the field, things change.”

But despite all the difference makers for Robbinsdale Cooper, Irondale made key plays of its own. The Knights made a furious comeback in the fourth quarter to tie the game, thanks to the play of quarterback Brendan White and running back Parker Freiberg.

White got the comeback going with a 40-yard strike to Aden Price. Freiberg later tied the game on a run late in the fourth frame. The junior finished with 43 carries for 203 yards.

In the end, Irondale’s upset bid was stopped by Robbinsdale Cooper and senior Nate Hill. On senior night, Hill showed up. In the second quarter, he busted through the offensive and went 61 yards for a touchdown.

In the second overtime, Hill capped off his 128-yard night with a 10-yard run that proved to be the game-winner.

“Tonight was huge for me, especially after breaking my ankle last year and missing our regular season finale,” Hill said. “We came together and just continued doing our job. We all have faith in each other.”

Hill came through and helped the Hawks, who regrouped in overtime after blowing a 14-point lead and deal with the stoppage due to the lighting issue.

“Our team didn’t know what to do. In my four years here, we haven’t played overtime,” Howard said. “There were a couple of times where we celebrated before it was over.

“I’m a man of faith. Regardless of what was happening, we just had to keep going and be 1-0 this week,” he added.

With all the hysteria now gone, both teams can focus on section play. Both teams reside in Class 5A, Section 5 and could end up in a rematch in the section semifinal. With both teams looking to break through a section that has been dominated by Spring Lake Park, Irondale coach Ben Fuller expects his team ready to give Robbinsdale Cooper another fight.

“We’re a pick-six and kickoff return from dominating that game,” Fuller said. “We’re not a 4-4 football team. If we want to accomplish what we can, we’re going to have to come back here and beat these guys.”

Throughout the game, Robbinsdale Cooper, which is ranked second in the Class 5A Associated Press poll, found itself with various players making plays for big-time yardage. Onte Burns, Kevon Fryer and Pedro Amoussou all tallied touchdowns in the win.

Hawks quarterback Cameron King threw for 99 yards and a touchdown in the win. 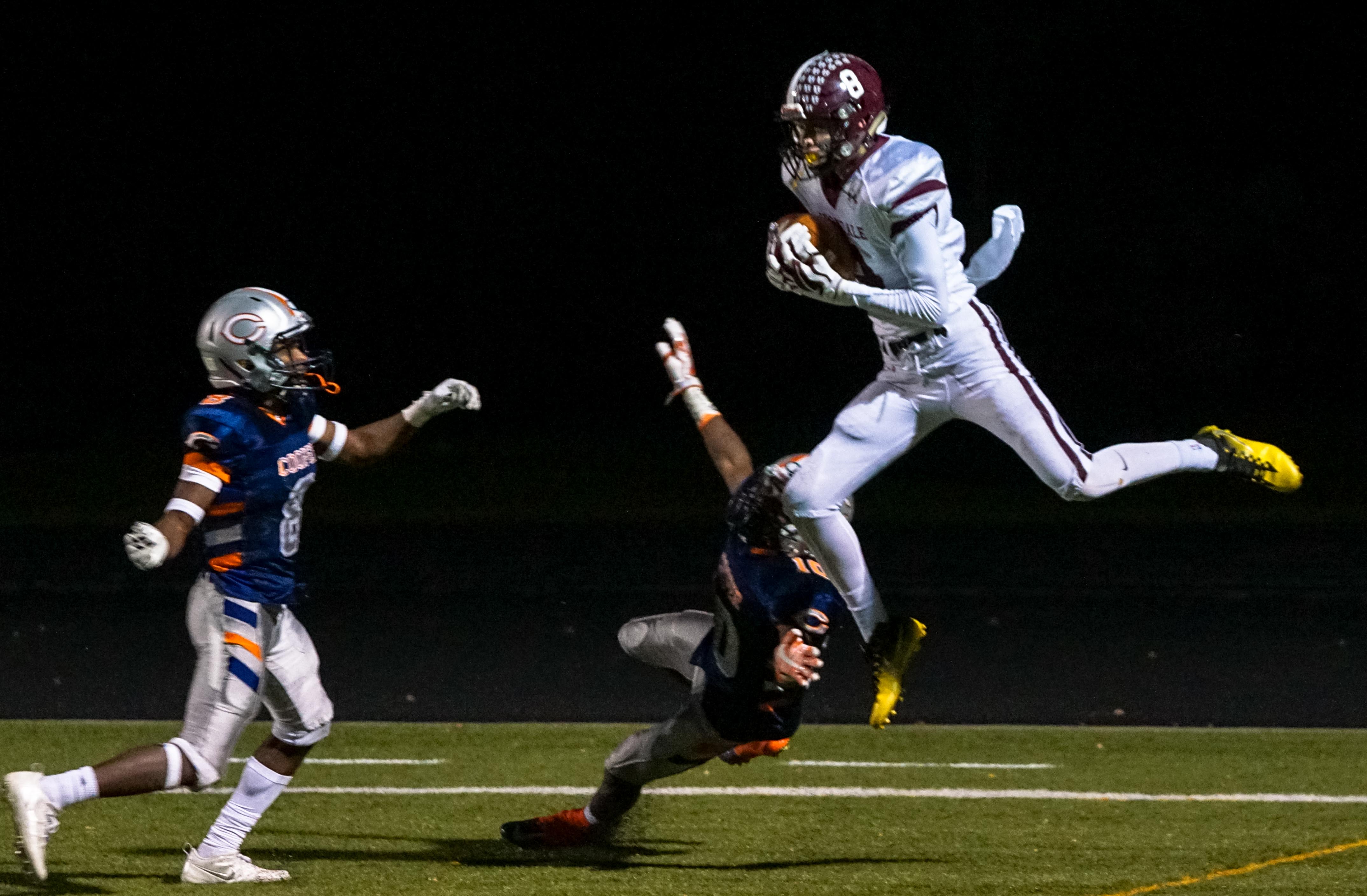