Otis Weah led the Spuds to their fourth consecutive win since dropping their season opener. 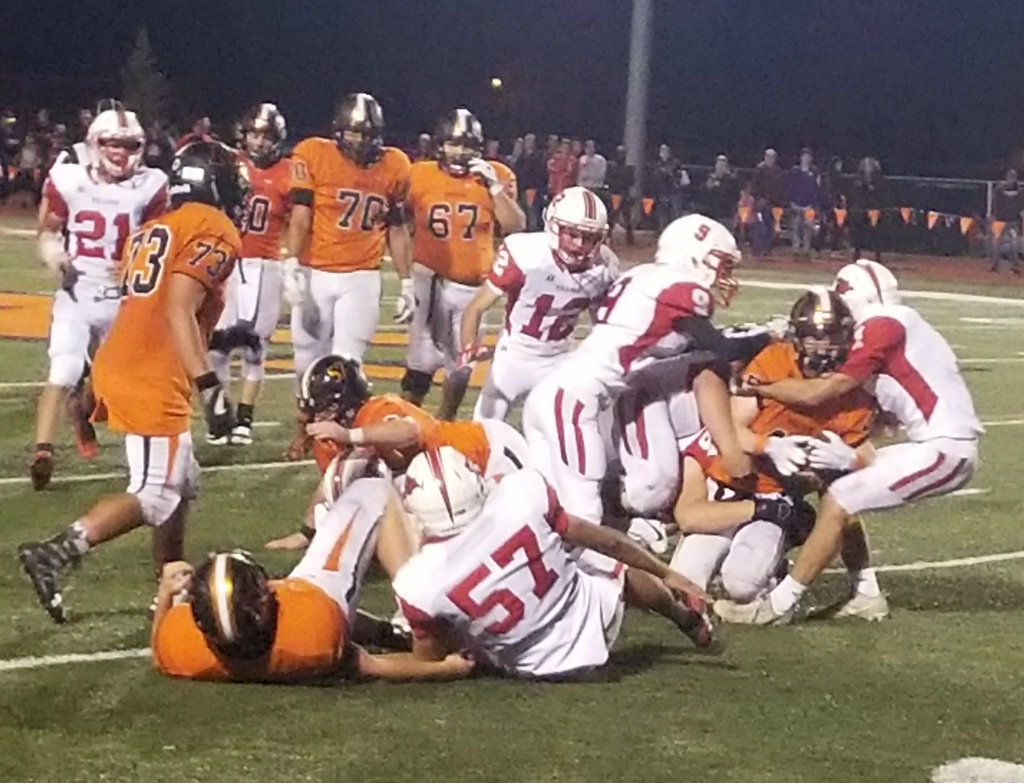 Riley Schock fights for yards Friday night at Moorhead High School. Schock rushed for 125 yards and a touchdown in the Spuds' 36-20 win over Willmar. Photo by Matt Bigelow, SportsEngine

Otis Weah models his game after Le’Veon Bell. He dominated Friday night the way Bell has on his share of Sundays.

Weah rushed for 206 yards, and scored four touchdowns, combining a rare patience with on-a-dime explosiveness to lead Moorhead High School to a 36-20 win over Willmar Friday night in Moorhead.

“I play like the guy whose number I have,” said Weah. “I’ve always wanted to be like Le’Veon. It’s just like, wait for stuff to develop, once it does hit it. Put your foot in the ground and get the yards you can. Just reading blocks and finding for every yard I could get.”

It was patience, it was power, it was elusiveness. It was those things plus a whole lot of tenacity. And it was on both sides of the ball as not only did Weah pile up yards and points that would make a fantasy footballer sing praises, he also came up with what might’ve been the biggest defensive play when he stripped Willmar’s Ethan Roux of the football late in the fourth quarter to all but seal a Spud victory.

“I love defense,” said Weah. “Offensively and defensively it’s a mindset just grinding every play. Just keep pushing for more and more every time. It sets the tone for us.”

Weah also had an interception in the game.

Normally a high-flying offense, Willmar had a difficult time piling up the points without all-time passing leader starting quarterback Donald Jurek who is out with an injury. Drey Dirksen filled in and was effective, rushing for 63 yards and throwing for another 153 yards on 15 completions.

A 21-yard touchdown pass from Dirksen to Caleb Ditmarson with 9 minutes, 14 seconds left in the third quarter tied the game at 14-14.

It stayed that way for 11 seconds as Weah took a sweep off the right tackle and raced to a 60-yard score.

Willmar pulled within one point after Jake Evans returned an interception 65 yards with 6:55 to play. But the Spuds responded again, going 57 yards in five plays with Weah once again capping things off with a score.

His forced fumble against Roux on the ensuing possession, followed by a 74-yard touchdown run by Riley Schock put an exclamation point on the contest. Schock finished with 124 rushing yards.

Weah dominated the game in Le’Veon Bell fashion and said a win over a good Willmar team can be something of a springboard for the rest of Moorhead’s season. And in a Class 5A, Section 8 that appears to be theirs to lose, the Spuds have high goals.

“This one sets us up for the rest of the season,” Weah said. “Once we get going, we are going to keep going. It’s just keep grinding week by week. We’re gonna get there.”

Moorhead, ranked No. 7 in the Class 5A Associated Press poll, improves to 4-1 and plays again Friday at Sartell-St. Stephen. Willmar drops to 3-2 and hosts St. Cloud Apollo next.

Otis Weah has been racking up some mileage so far this season. The senior running back added to his impressive string of performances Friday night, leading Moorhead to a 36-20 win over Willmar.

Weah piled up 204 rushing yards and scored four touchdowns, combining an impressive elusiveness with grinding physicality to wear out a fast but undersized Willmar defense.

A normally high-flying offense, the Cardinals moved the ball effectively throughout the evening but were hamstrung by three turnovers - the third being a dagger as Weah stripped Ethan Roux late in the fourth quarter with Willmar threatening. Drey Dirksen ran the ball well, compiling 63 yards on 17 carries, but also tossed two interceptions for the Cardinals.

Moorhead, ranked No. 7 in the Class 5A Associated Press poll, moves to 4-1 while Willmar drops to 3-2 on the season.