P.J. Fleck’s youth, energy and persistent message -- along with his coaching ability -- appear to have won over many high school coaches and players in the state. 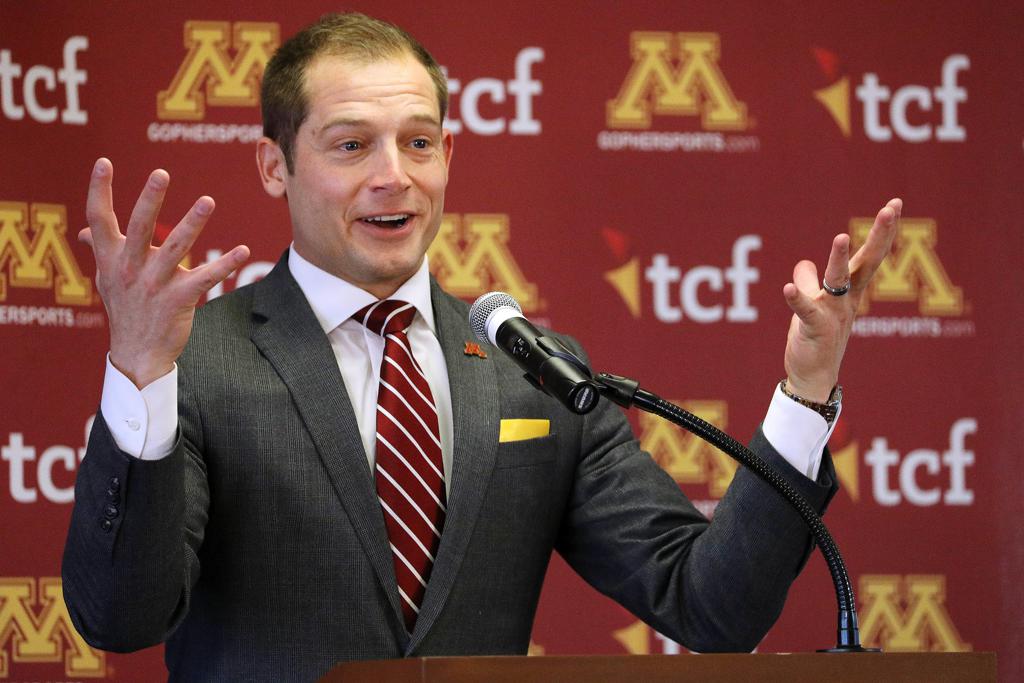 The honeymoon between the Minnesota football community and newly hired Gophers coach P.J. Fleck has shown no signs of abating. Fleck’s youth, boundless energy and persistent message, along with his coaching ability, appear to have won over many high school coaches and players in the state.

“I like him,” Totino-Grace coach Jeff Ferguson said. “He seems like a guy who can sell his culture and his philosophy. He’s a heck of a salesman and an outstanding recruiter. He’s done a really nice job wherever he’s been.”

The hyper-energetic Fleck didn’t waste a moment making himself known to the locals over the weekend. He attended the Minnesota Football Coaches Association coaches clinic Saturday morning, then made a beeline to the MFCA executive committee meeting in St. Louis Park. All the while, Fleck was fielding interview requests, working to bring recruits to Minnesota and trying to set up a coaching staff.

“I actually ran into him twice that day,” said Ferguson, an executive committee member. “The key is being true to who you are. You can tell that’s who he is. You can’t be fakey or the kids will see through that.”

Josh Helmholdt, Midwest recruiting analyst for Rivals.com and Yahoo Sports, said “recruits believe in Fleck, what he tells them and that he can get them to reach their potential.”

In attendance at a banquet not long after Fleck got hired at Western Michigan, Helmholdt marveled how well the young coach carried himself among a group of coaches that included Penn State’s James Franklin.

“Franklin is one of the best living room guys, one of the best recruiters, and Fleck still owned that room,” Helmholdt said. “He’s very engaging and he has a lot of confidence. The kids respond to that.”

That ability to influence people and sway opinions has been obvious in Fleck’s ability to get players with previous commitments to see the Gophers with fresh eyes.

So far, nine recruits have flipped to play for Fleck at Minnesota. The five Minnesota prep players who had committed to the Gophers under coach Tracy Claeys were contacted by Fleck, who said in a radio interview that they were “all on board.”

“It’s safe to say that a lot of people are very excited about coach Fleck,” Mac Ryerse said. “We watched his press conference — a couple of times, in fact — and spent some time looking at things that were written about him. He articulates his philosophy very well. He has a clear mandate from [Minnesota] to mesh his approach to running a program with what they’re trying to set up here. The odds are that he will be successful.”

The NCAA signing day is Feb. 1, meaning none of the committed recruits are bound to anything. And it goes both ways. It’s possible the new staff could have second thoughts about Claeys’ recruits.

When he took over at Western Michigan in December 2012, Fleck and his staff reassessed the entire recruiting class of the previous regime, withdrawing offers to many of them. Already four players from outside Minnesota who had committed to the Gophers have reopened their recruitment.

“There was some backlash [in his first year] when he pulled an offer on a kid late in the game,” recalled Eric Stiegel, coach at Grandville (Mich.) High School, perennially one of the top teams in Michigan’s largest class. “Some of that was because of his personality. But I don’t think that’s anything different than a [Michigan coach] Jim Harbaugh or [Michigan State coach] Mark Dantonio would do.”

It’s unrealistic to expect significant changes to happen in a single season. It took Western Michigan fans more than a year to fully buy into Fleck’s message after the Broncos won only one game his first season.

“There was lot of skepticism,” Stiegel said. “But look at the results he’s gotten. Don’t be mistaken into thinking he’s successful just because he can come up with a fancy line to sell recruits. The guy really knows what he’s doing.”

Some Minnesota high school coaches are cautious, taking a wait-and-see approach. They have heard this spiel before.

“I’ve heard a pretty similar message from other coaches,” said Steve Hamilton, coach of Class 5A champion Elk River. “They all say the right things, like they want to close the borders, but I never had a coach come to the school and no one has ever asked about one of our kids unless I called them first. That’s been frustrating.”

But Hamilton said he’s willing to withhold judgment based on Fleck’s message and track record.

“My impression is that he’ll be different,” Hamilton said. “You have to create a buzz. He’s doing that.”