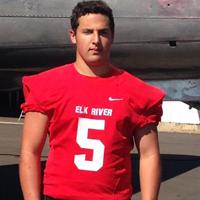 It was on that date 12 years ago that Solors was declared cancer-free. When he was 5, Solors was diagnosed with rhabdomyosarcoma, a cancer that attacks muscle tissue. Surgery removed most of the tumor, which was located behind his right eye. Radiation took care of the rest but also resulted in a cataract in his eye. The cataract was removed, but that left Solors legally blind in his right eye.

Time has worked its magic and Solors, whose booming kickoffs are an unsung weapon for the Elks and resulted in him being a second-team All-Metro selection, thinks little of his past health issues. Except, of course, on Dec. 16. Solors makes a point of commemorating the date each year.

“I’ve pretty much adapted to it over the years,” he said. “It’s quite a bit in the past. But I still recognize the date I got the clean bill of health. It’s another day to be thankful for.”

Caledonia fans held their breath in anticipation while following the flight of Owen King’s passes. They let out gasps as Alex Goergen delivered crushing blows.

Goergen, a senior linebacker, finished with four tackles, two for a total of 7 yards lost, and a pass breakup.

The latter play came on a big hit in the second quarter, one that drew reaction each time the replay was shown. Caledonia players thrived on Goergen’s physical play all season.

“We call him the Pain Train,” King said. “He brings it every single game, you can count on that.”

“We don’t have anything to do with how many ticket windows are opened,” Stead said. “We tell [stadium officials] what we expect and they make that determination.”

Stead said he was outside the stadium when the lines were at their longest and witnessed the crowds firsthand.

“When they saw the lines, they opened up more windows,” he said. “They responded.”