The Elks' vintage-style offense hummed no matter who carried the ball en route to a 42-14 victory and the school's first football title in its 125-year history. 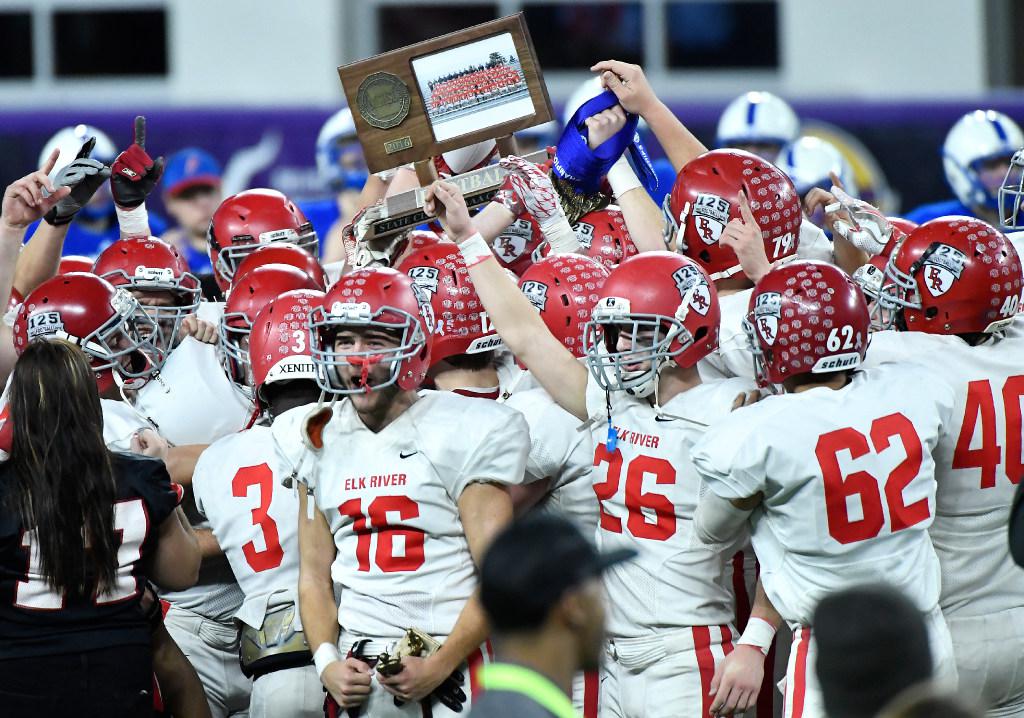 It sounds so easy. Elk River does nothing fancy. In fact, its straight-T offense is something out of a bygone era.

But stopping it? No one’s done it yet.

Spring Lake Park found out the way so many others had during the season, getting routed by the Elks 42-14 on Saturday in the Class 5A championship game. Elk River (13-0) rolled up 446 yards of rushing offense against a normally hard-nosed Panthers’ defense.

“Holy trap,” said Schlieff, referring to Elk River’s bread-and-butter offensive play. “We saw it on film against some pretty good teams, but we couldn’t stop it, either. I thought we’d be able to, but it’s better than your average trap.”

Most prep football observers started buying into Elk River after the Elks blew out defending champion St. Michael-Albertville in the fourth game of the season. But Elks coach Steve Hamilton saw the potential far sooner.

Hamilton said the secret to the Elks’ success – well, in addition to some really good players – was a unique bond they had, one that was evident from the outset.

“When these guys won the eighth-grade championship, I went and talked to them,” Hamilton said. “Sam [Gibas, Elk River captain] remembered everything I said. I can barely remember yesterday, so that was impressive to me. This group is so tight and they love football, probably more than any group I’ve ever been around.”

Hamilton said he never expected Elk River to flatten every team in its path, but he did see something special.

“Basically have no close games all year? No. But I thought there was a chance to do this,” he said.

It was assumed that Spring Lake Park (12-1) would be Elk River’s biggest test. That lasted all of two Elk River offensive plays, when Gibas sliced off right tackle for 60 yards and a 7-0 Elk River lead.

Elk River added three more touchdowns in the first half, all on long runs. Sherrod Kpahn scored from 50 yards out and Nick Rice added a pair of touchdowns on runs of 33 and 54 yards. Elk River led 27-0 at halftime.

"When the line is blocking the trap like that, it’s like stealing,” said Rice, who finished with 242 yards and three touchdowns rushing.

Spring Lake Park (12-1) showed life early in the second half, getting a 1-yard touchdown from Nick Robinson to cut the lead to 27-7. But Elk River responded with two deflating scores, ending the threat and cementing its first state championship in the same year the school celebrated its 125th year of football. 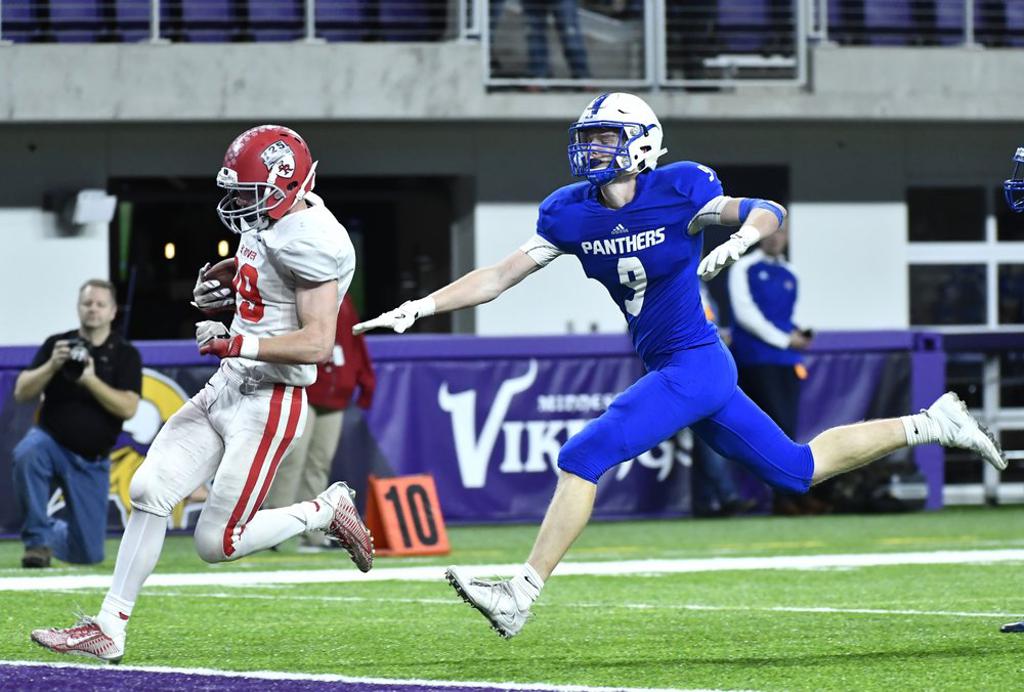 Prep football fans started buying into Elk River, which finished an utterly dominant season with another rout of a very good team by defeating previously undefeated Spring Lake Park 42-14 in the Class 5A championship game, long about the fourth game of the season.

That’s when the Elks crushed defending champion St. Michael-Albertville 43-6 without giving up an offensive touchdown. They would not to be ignored and they weren’t, jumping into the No. 1 spot in the Associated Press state polls.

But the Elks knew much earlier. Coach Steve Hamilton knew. This team was the masterpiece, the magnum opus, the culmination of a unique and successful style that blended a vintage style with modern-day athleticism. When he arrived six years ago, taking over a program scarred by a hazing scandal, Hamilton knew the best way to success was to do something no one else was doing.

He installed an old-style offense — the straight-T — and bolstered it with quick, agile linemen. It seemed gimmicky for a while, but the genius showed through this year. The Elks ran roughshod over every team it played, building up huge leads despite treating the forward pass as if it were a holiday treat. They averaged more than 45 points per game, with most of their games being over by halftime.

It was assumed that Spring Lake Park would be Elk River’s biggest test. The Panthers have big, tough lines, a quarterback in senior Zach Ojile who had never lost a game as a starter and familiarity with defending option-style offenses.

Elk River added three more touchdowns in the first half, all on long runs. Sherrod Kpahn scored from 50 yards out and Nick Rice added a pair of touchdowns on runs of 33 and 54 yards. Elk River led 27-0 at halftime, having rolled up 285 yards rushing.

The Elks defense was not to be overlooked. Spring Lake Park managed just 98 yards in the first half, well below its per-game average.

The Panthers showed life early in the second half, scoring on a one-yard run by Nick Robinson and cutting the lead to 27-7.

No matter. Elk River responded with two more deflating scores. One was on a 50-yard run by Rice, who finished with 243 yards rushing on just 13 carries. The other was a 30-yarder by backup quarterback Noah Weege.

When it was over, Elk River left the field with a perfect 13-0 record and the first state championship in the school’s 125th year of high school football. 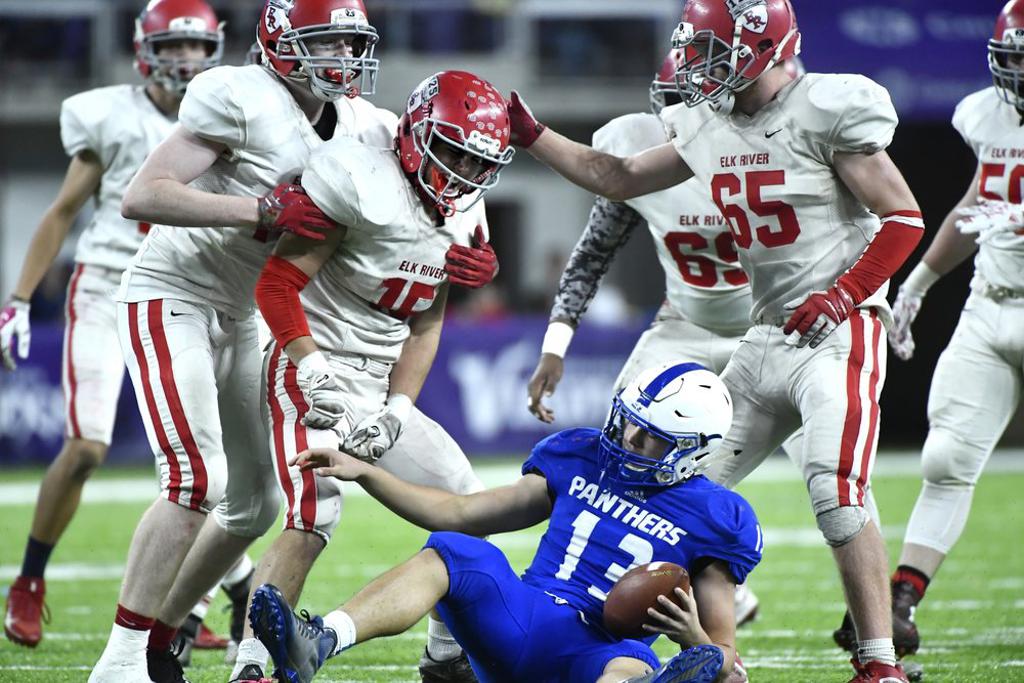