The Panthers' Luke Onstad scored on a 25-yard return in the fourth quarter to help seal a 14-0 victory. 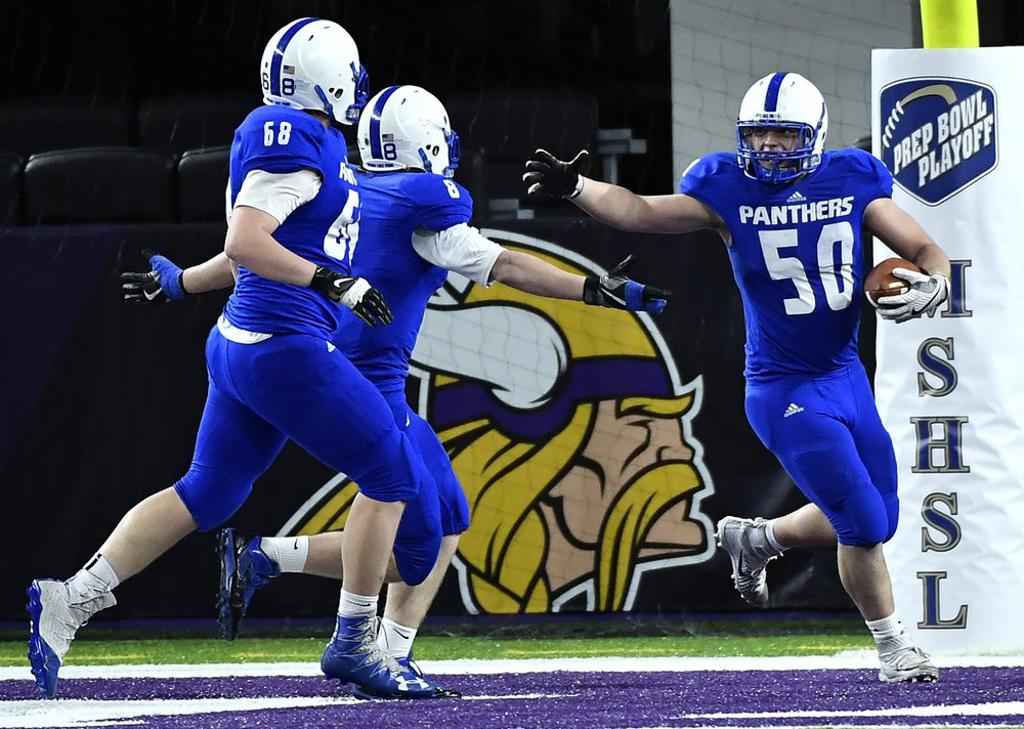 One of the best defensive performances coach Jeff Schlieff witnessed in his 24 years at Spring Lake Park owed to a player he jokingly dubbed “Mr. Hands.”

Defensive tackle Luke Onstad grabbed the third Spring Lake Park interception of the fourth quarter, returning it 25 yards for the clinching touchdown in a 14-0 victory against Mankato West Saturday in the Class 5A semifinal at U.S. Bank Stadium.

Onstad, who last scored a touchdown in seventh grade, got stymied by two Mankato West blockers at the line of scrimmage, spied quarterback Robert Meidl and pounced.

“All of a sudden he threw it, the guys let go and I was wide open,” said Onstad, who stuck his left arm in the air and snared the ball. “He threw it right to me.”

The Scarlets were forced to pass the ball after senior running back C.J. Terry, the team’s top rusher with 1,508 yards entering the game, left in the second quarter with a dislocated elbow. Teammates paid tribute before Terry left the field on a cart. But the emotional toll lingered.

“We just thought we had to fight harder because without him we definitely lost something big,” Meidl said.

Mankato West (11-1) trailed 7-0 at halftime and battled to the end. Spring Lake Park’s defense, however, made the difference.

Meidl and Dawson Cooper connected on a 47-yard pass to Spring Lake Park’s 27-yard line in the fourth quarter. But Panthers lineman Dylan Kahlstorf ended the drive by knocking the ball loose from Meidl on fourth down.

Then Ojile, 24-0 as a starting quarterback, left the field during the ensuing Mankato West drive. Athletic trainers taped Ojile’s left ankle on the bench. He did not run the ball in the second half. 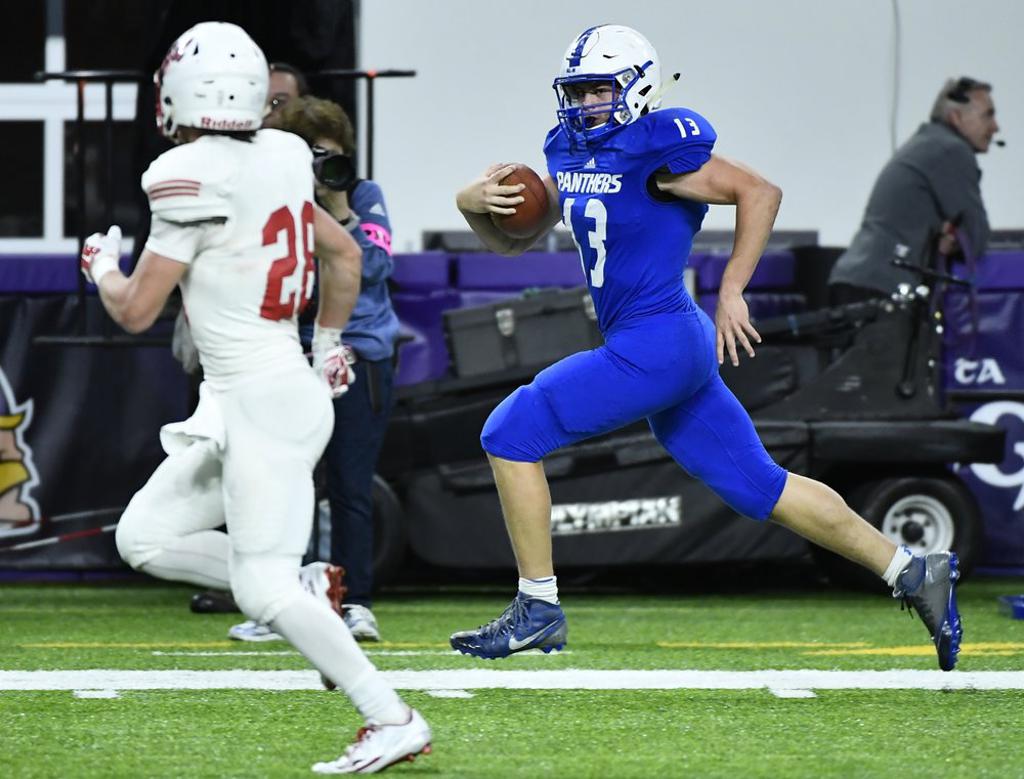 Spring Lake Park quarterback Zachary Ojile ( 13) scrambled out of the pocket for a large gain and a first down, setting up his team for the only touchdown scored by either team in the first half. Photo: Aaron Lavinsky * aaron.lavinsky@startribune.com

Luke Onstad grabbed the third Spring Lake Park interception of the fourth quarter, returning it for the clinching touchdown in a 14-0 victory against Mankato West in the Class 5A semifinal played Saturday at U.S. Bank Stadium.

Mankato West (11-1) battled to the end, despite being undermanned when star senior running back/defensive back C.J. Terry left the game in the second quarter with an arm injury.

His team trailing 7-0 in the fourth quarter, Scarlets quarterback Robert Meidl went deep for a 47-yard pass play to Dawson Cooper at Spring Lake Park’s 27-yard line. But Dylan Kahlstorf knocked the ball loose from Meidl on fourth down and the quarterback fell on it to end the drive.

The Panthers’ defense came up huge three more times as Cade McMahon, Brad Cooper and Onstad made fourth quarter interceptions. Onstad, lined up at defensive tackle, stuck his left hand in the air, snared Meidl’s pass attempt and took it 25 yards to the end zone.

Spring Lake Park’s offense clicked on just one drive but it was enough to take a 7-0 lead into intermission after a first half in which injury struck star seniors from both teams.

Spring Lake Park quarterback Zach Ojile sparked his team’s scoring drive with a 50-yard run to the Scarlets’ 3-yard line. But he walked off the field during the ensuing Mankato West drive. One play later, Terry crumpled to the turf. He entered the game as the Scarlets’ leading rusher with 1,508 yards.

As athletic trainers taped Ojile’s left ankle on the bench, Terry’s situation became more serious. Eventually, he got up and walked around before he was carted off the field with his left arm immobilized.

That left Meidel, the Scarlets’ second-leading rusher, to handle the running game. He gained 68 yards on 22 carries.

Both Ojile and Terry also made contributions on their respective defenses. Ojile did not see action at safety the rest of the game.

Each team stumbled at times in the first half. Mankato West missed a 33-yard field goal and later turned the ball over on downs. Spring Lake Park fumbled at Mankato West’s 25-yard line. 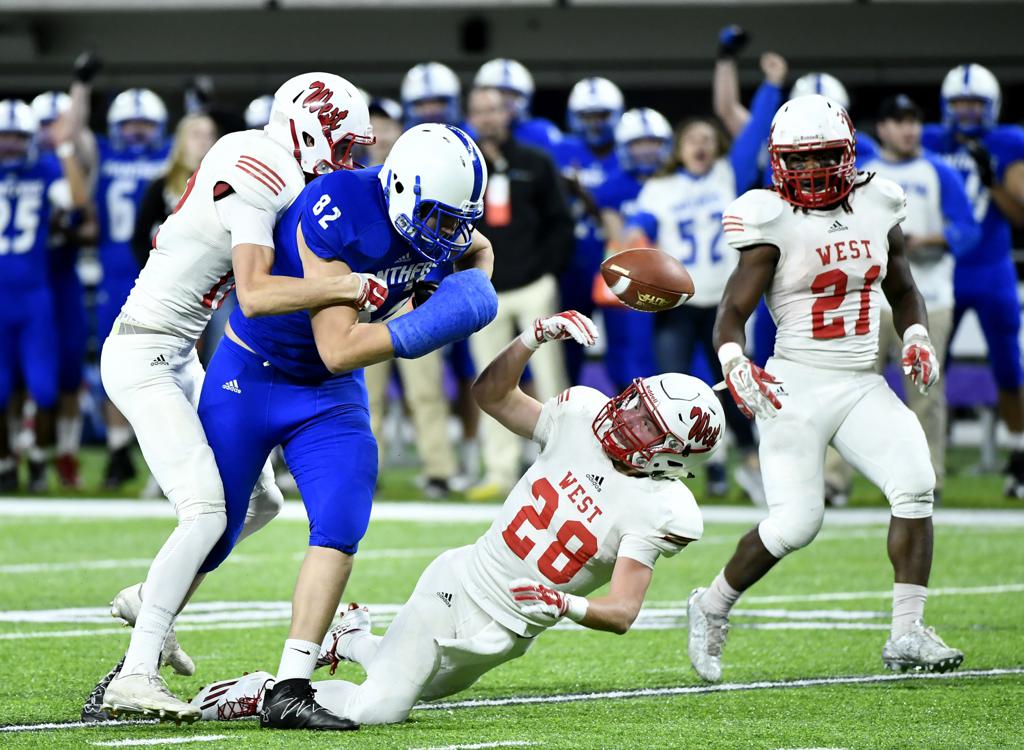