5A: Spring Lake Park rallies, then holds off Andover

The Panthers, behind Zach Ojile and Cade McMahon, ran for 362 yards en route to a 31-30 victory. 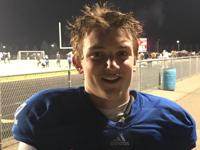 It was the play Zach Ojile waited an entire year for.

On Friday, playing in the same round of the tournament and his Panthers leading Andover 31-30 with four seconds to play, Ojile and the rest of the Panther defenders stood on their own 30-yard line, ready for a Huskies pass to the end zone.

Andover tried a trick play that Spring Lake Park sniffed out and Huskies receiver Adam Perrin was tackled by a group of Panthers as time expired on the field at Centennial High School.

Ojile and his teammates ripped off their helmets in celebration.

“I saw nothing behind me and they tried to run hook and ladder,” Ojile said. “We just came up and made the play with zero on the clock.”

Ojile accounted for 128 of Spring Lake Park’s 362 yards on the ground. Running exclusively read-option, Ojile handed the ball 14 times to running back Cade McMahon, who rushed for 89 yards and two touchdowns.

But when the Panthers needed critical yards, Spring Lake park coach Jeff Schlieff called Ojile’s number just has he had all season.

“He is 23-0 as a starting quarterback and tonight he was huge for us,” Schlieff said. “He is the franchise. We have some other guys too but he calls those plays out there and really makes it happen for us.”

Trailing at halftime, Spring Lake Park came back in the second half and held off Andover 31-30 in the Class 5A quarterfinals Friday at Centennial High School.

The Panthers (11-0) ran for 362 yards and quarterback Zach Ojile, who eclipsed 1,500 yards on the season, accounted for 128 of them. He rushed for a third quarter touchdown that put the Panthers in the lead for good.

The Huskies (5-7) passed for 274 yards but struggled to stop the Spring Lake Park ground attack.

The Panther defense had three sacks.