Marshall blows out Fridley, advances to the Class 4A semifinals

Running back Jefferson Lee V led Marshall with four touchdowns and a two-point conversion in the Tigers' 40-7 win. 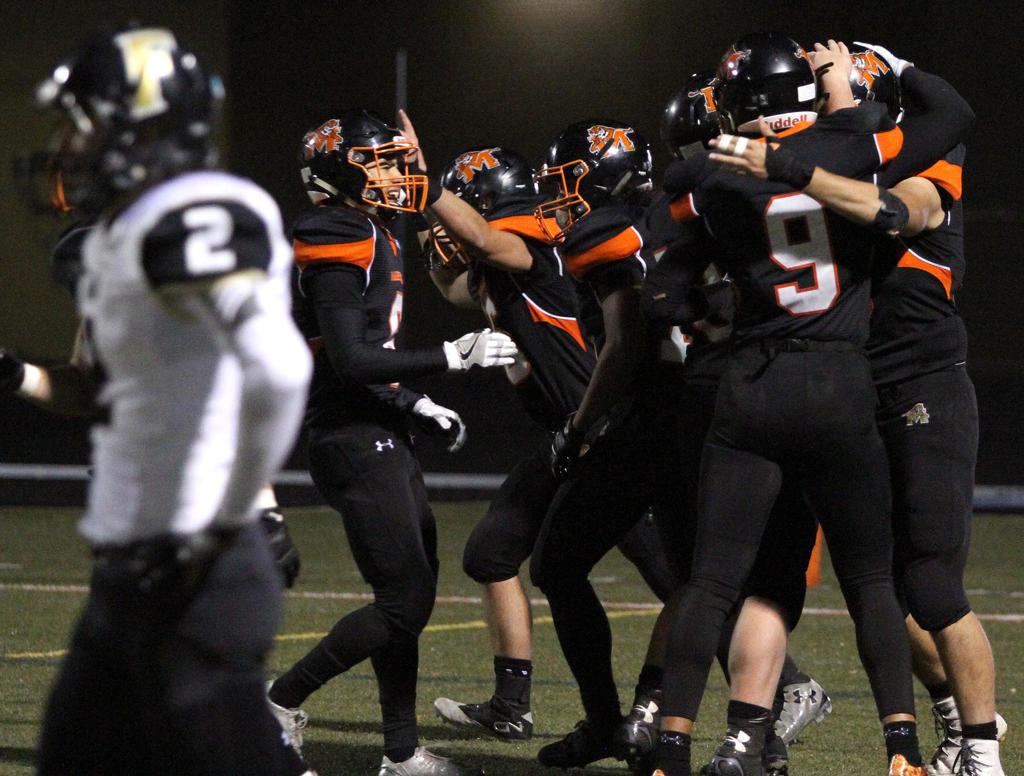 After a game-opening fumble set up Fridley for a 1-yard touchdown run, Marshall went on to score six unanswered touchdowns to breeze to a 40-7 win, sending Marshall on to the Class 4A semifinals at U.S. Bank Stadium.

Jefferson Lee V led Marshall’s offense, contributing four touchdown carries, a two-point conversion, and more than 150 rushing yards. Lee, who racked up over 1,300 yards and 31 touchdowns in the regular season, was quick to credit his offensive line for his success.

“The line is a big part of it,” Lee said. “You can’t move without them. They do a beautiful job and when they open things up, it makes things a little easier.”

Lee said that whenever one player makes a mistake, the others are there to back them up. One of the Tigers’ biggest strengths, he said, is the mental aspect of their game.

“We have to keep each other up,” Lee said. “We came out of this one with a lot of missed things – a lot of fumbles, missed tackles, missed interceptions. We just forget it; it’s in the past and we’ve got to keep moving. We were beating ourselves up over it throughout the game so we need to fix that for next game.”

With the exception of their most recent game against Hutchinson, Marshall won all of its games this season by at least 29 points and allowed 14 or fewer points in all regular season games. Head Coach Terry Bahlmann said that’s a credit to his team’s play on both sides of the ball.

“Those wins say that we’re explosive on offense but it also says that our defense does a good job,” Bahlmann said. “Tonight we fumbled on the one yard line and probably could have gotten off to a worse start, but after that our defense played lights out and really kept us in the game.”

Winkelman and Andries have both committed to Division I colleges; Winkelman signing with South Dakota State and Andries committing to the University of Minnesota.

Bahlmann is proud of the team he has and how well Andries, Winkelman, and the rest of the team play off each other.

“We’ve been knocking at the door with our program and this is a big win for our program,” Bahlmann said. “We struggled a bit early getting the ball on the ground but the guys kept their composure and we played well. We’re still going and it’s a lot of excitement for us.” 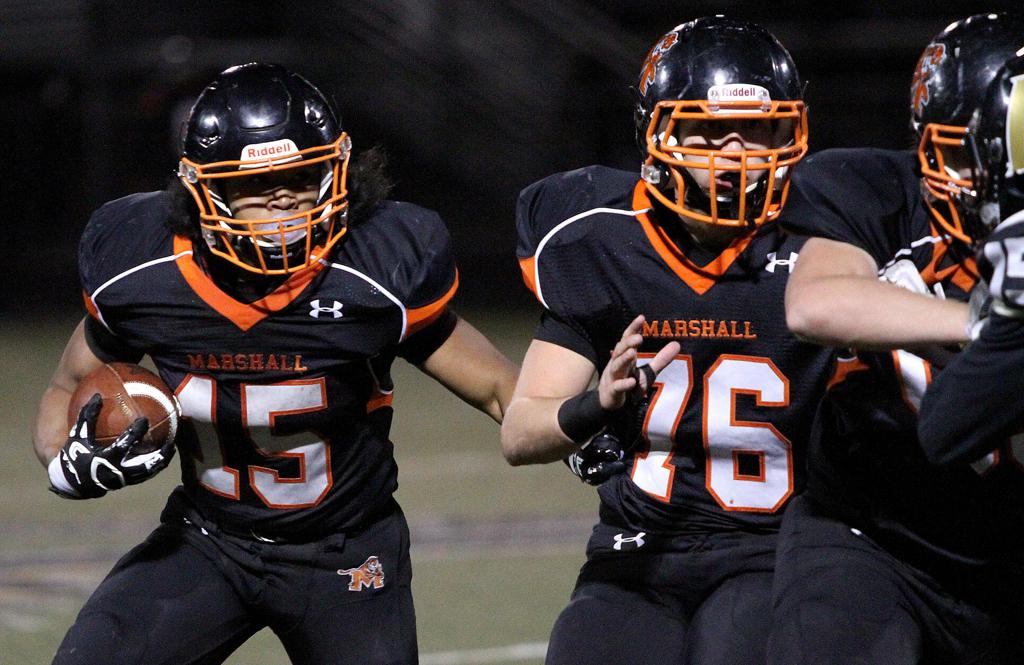 Marshall overcame an early fumble and Fridley touchdown to score six unanswered TD's en route to a 40-7 win Friday night in Burnsville. The win sends Marshall to the Class 4A state semifinal at U.S. Bank Stadium.

Marshall running back Jefferson Lee V led the offense with just over 150 yards. Lee accounted for four of Marshall’s touchdowns and a successful two-point conversion.

Leon Deshield scored the lone touchdown for Fridley on a 1-yard carry. 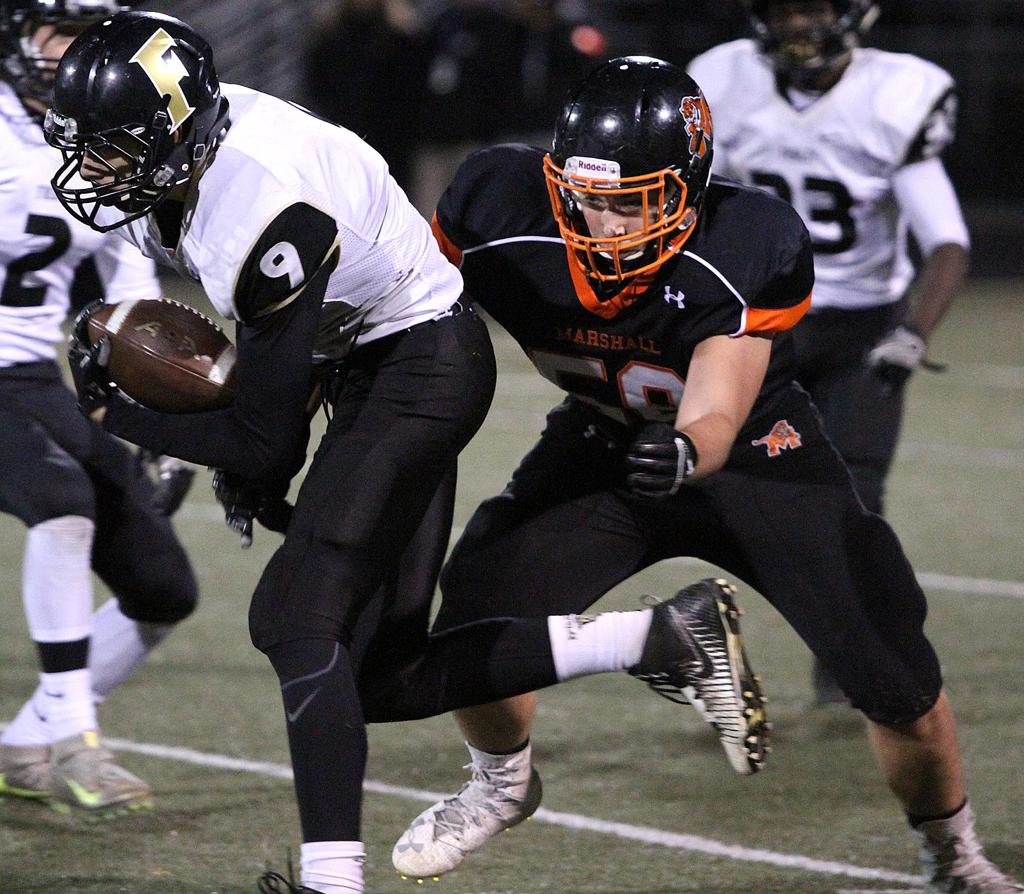 Marshall junior Jordan Falconer closes in on Fridley's Nate Soto to record a tackle in the second half Friday night. Photo by Drew Herron, SportsEngine