A St. Cloud camp aims to improve prep kickers who are increasingly vital. 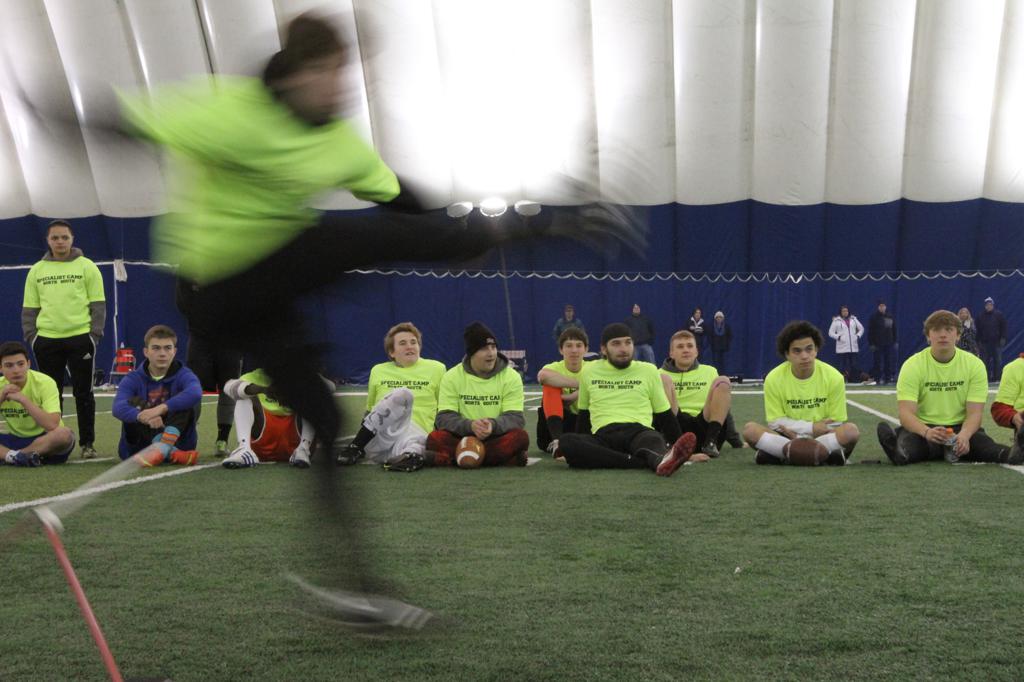 The first time Cooper’s Eddie Ogamba kicked a football, he nearly shattered a window at the school library. For Mahtomedi’s Chase Sullivan, his first kick exploded off his foot and sailed into the end zone, shocking everyone watching, including himself. Eagan’s Nate Willis saw his first kick dribble off his foot, a kicking equivalent to a worm-burner on a golf course.

Vastly different results for all three, with one unifying result: They were hooked and couldn’t wait to do it again.

“I just fell in love with kicking,” Sullivan said.

Ogamba, Sullivan and Willis were among dozens of local high school kickers who took part in the Special Teams Football Academy’s Northern Specialist Camp on Jan. 8 and 9 at St. Cloud State University. The camp, one of many run by former Armstrong High School and University of St. Thomas kicker Chris Husby, is dedicated to the development of one of the most overlooked — often regrettably — parts of the high school game.

For years kicking was afterthought to high school coaches. Finding a kicker often amounted to a tryout a few days before the first game, consisting mainly of seeing who could kick it the farthest. As the game has become more sophisticated, however, a reliable kicker’s value has become obvious. A good kicker can make extra points consistently, salvage stalled drives with field goals and be a vital weapon in the all-important field position battle.

“I’ve seen kicking become more and more important to the high school game,” Husby said. “You produce one successful kicker and coaches see that. Then they start sending the next few over to you.”

Husby, also special teams coordinator at Maple Grove, has run kicking camps for seven years and has overseen impressive growth. He’s built a national reputation since joining forces with Brian Jackson, a former kicker at Ball State who runs similar camps in the southeastern United States. They serve as co-directors for each other’s camps.

“At first, I had camps when just two kids would show up,” Husby said. “Now, running these with Brian, it comes close to 50.”

Last fall St. Michael-Albertville won two crucial games on its way to the Class 5A state championship thanks to walk-off field goals.

“I feel like, especially over the last few years, people have noticed how important it is,” said Sullivan, a junior who also made a game-winning field goal in the Class 5A playoffs last fall. “Especially in the field position game. Making a team go 80 yards after a touchback is huge.”

The camps cater to high school-age kickers, with schooling in everything from basic kicking and punting techniques to handling the college recruiting process. Kickers like Edina’s Patrick LeCorre, currently kicking for Montana, former Stillwater kicker Danny Laudet and former Minnesota kicker Eric Ellestad lend their expertise, giving back to camps that helped them refine their craft.

“I would not be playing football without Chris and the camps,” said LeCorre, a two-time all-metro selection. “They help with everything — exposure, instruction, competition. When I started kicking as a freshman [in high school], I was pretty foreign to it. I didn’t have any foundation, and that’s the most important thing.”

The inflatable dome that covers Husky Stadium field on the final day of the camp echoed with the repeated thumps of footballs being launched. A few of the more experienced kickers, mostly the college-level instructors, took turns trying to hit the top of the dome with punts, and they did, occasionally.

The final session of the camp was dedicated to friendly competition, when each kicker got the chance to prove himself on kickoffs, punts and field goals. The results were tallied and rankings handed out, which is vital to kickers trying to get noticed by college coaches.

When competition was over, an event elite team was chosen, recognizing the top 12 participants. Two were long-snappers, a recent addition to the camps. Northfield’s Isaac Stadler, a senior who set a state record with five field goals in a game in last fall’s section playoffs, finished as the top high school kicker. Sullivan was next, followed by Ogamba. Sullivan was named Mr. NSC (Northern Specialist Camp) for his overall efforts.

Willis, a freshman whose big leg belies his small frame, also was on the list, a big step for a kicker who just wants to make the team next season. “I’m just here to get better and learn,” he said. “My goal is to be the varsity kicker.”

For most of the rest of the campers, the goal is to get chance to be a college kicker, a highly competitive field. While the techniques of kicking have improved drastically in recent years, kickers still have little cache with college coaches. Many high school kickers are forced to wait until long after the February signing day to receive an offer as coaches assess their needs. They become self-marketers as well as football players.

That doesn’t seem to have dampened any hopes, however. They know the risks involved, which Minnesota football fans witnessed first hand when Vikings’ kicker Blair Walsh duck-hooked a potential game-winner in an NFC wild-card playoff game. Kicking, a peripheral interest for many, is a passion for them.

“I love it all,” said Ogamba, who grew up playing soccer in Liberia. “People have told me I’ve got the leg and the power. I could see myself doing this for a long time.”