A peek behind the scenes after 15 weeks of football and seven Prep Bowl championships. 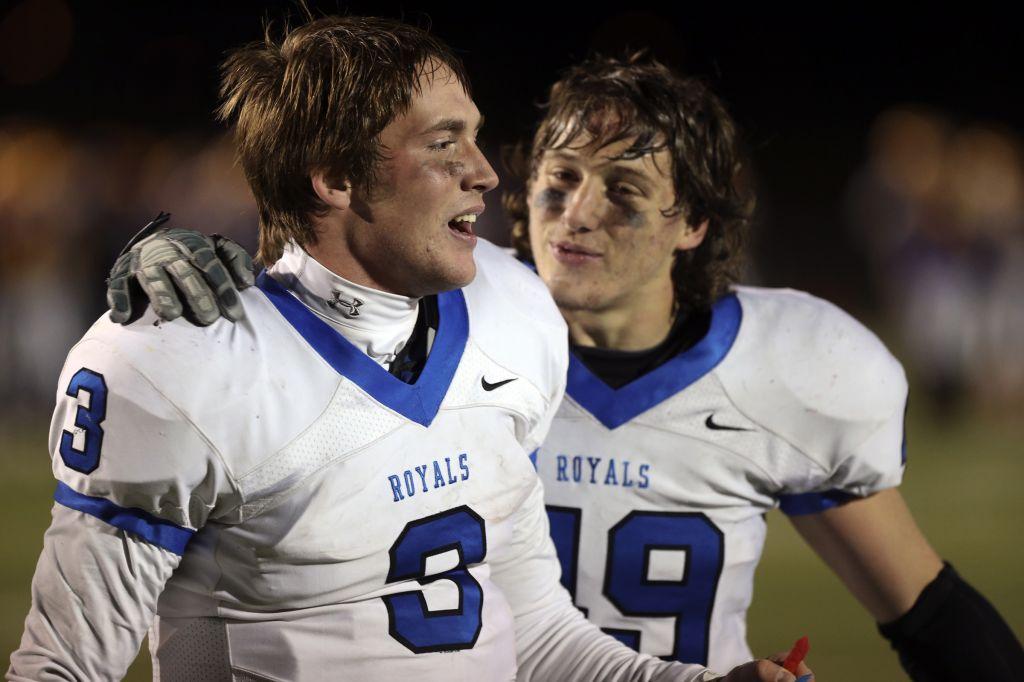 Fifteen weeks of high school football and seven Prep Bowl championship games later, the 2012 season is over. Three Star Tribune staff writers offer some tokens of news and moments behind the scenes.

Son's victory helps father's troubles fade: After Woodbury's first-round playoff upset of Cretin-Derham Hall, a reporter was looking for Woodbury quarterback Sawyer Moon, who already had left the field. An extremely happy Woodbury fan called out, "Hey, what a game, huh?" He smiled broadly and raised his hand to be slapped. The reporter did, then asked the fan if he might know where Sawyer Moon was.

On this night, cancer was the last thing on Dad's mind, pushed aside by the thrill of watching his son lead his team to an unexpected victory.

Totino savors a section championship: Long after the fans had emptied the stands following Totino-Grace's section championship victory over Spring Lake Park, seniors Nick Dorsey, John Bednarczyk, Joey Schiller and Zach Moser lay on their backs at midfield, helmets off, soaking in their last few moments on the home turf.

No, that's the other LeVoir: Eden Prairie introduced members of its 2002 Class 5A title team before its homecoming game. The announcer called out "Steve LeVoir," an all-conference lineman from a family of great football players, including older brother Mark.

"Didn't he play at Notre Dame?" someone asked.

"I think so," came a response.

It was then pointed out that it was Mark, not Steve, who was a Golden Domer.

Best online translation: On a football gameday web page, a Holy Angels supporter predicting victory against Farmington wrote, "dats why my squad finna whoop on all y'all tigers." The next commenter offered: "I believe my fellow teammates and I are fully prepared to engage our opponents this evening. We are superior in many aspects of the game, hence we believe a victory is forthcoming." Farmington won 41-28.

Best comeback: Trailing 26-0 after a long third-quarter Apple Valley touchdown, Eastview regrouped to score 29 unanswered points. Highlight: Eastview's Will Rains plowed an Eagles defender to the ground and somersaulted over him into the end zone.

Best Christmas in August: Four Lakeville South students were spotted sneaking large Ziploc bags of flour over the fence behind the home bleachers on opening night against cross-town rival North. When the Cougars took a 7-0 lead, staff writer Brian Stensaas thought it looked like December in the student section.

Conference shake-up: Minneapolis South wanted a spot in the powerful Lake Conference. Athletic director Mark Sanders and coach Lenny Sedlock said the football team would go first, and eventually be followed by the remaining varsity sports. The Lake Conference acknowledged there had been talks for scheduling more games against South. But the City Conference stepped in and shut down any consideration of making the jump.

New city contender: Minneapolis Southwest led Washburn 18-13 with just 72 seconds remaining, only to see its chance to dethrone the City Conference champion for the first time in a decade slip away. The Lakers settled for second place but still put together one of the program's best seasons (8-2, 5-1) and won their first postseason game since 1990. After the season their coach of the past three years, John Biezuns, resigned for personal reasons.