Through the first five games of the 2011 season, all was right in McBeain's world. 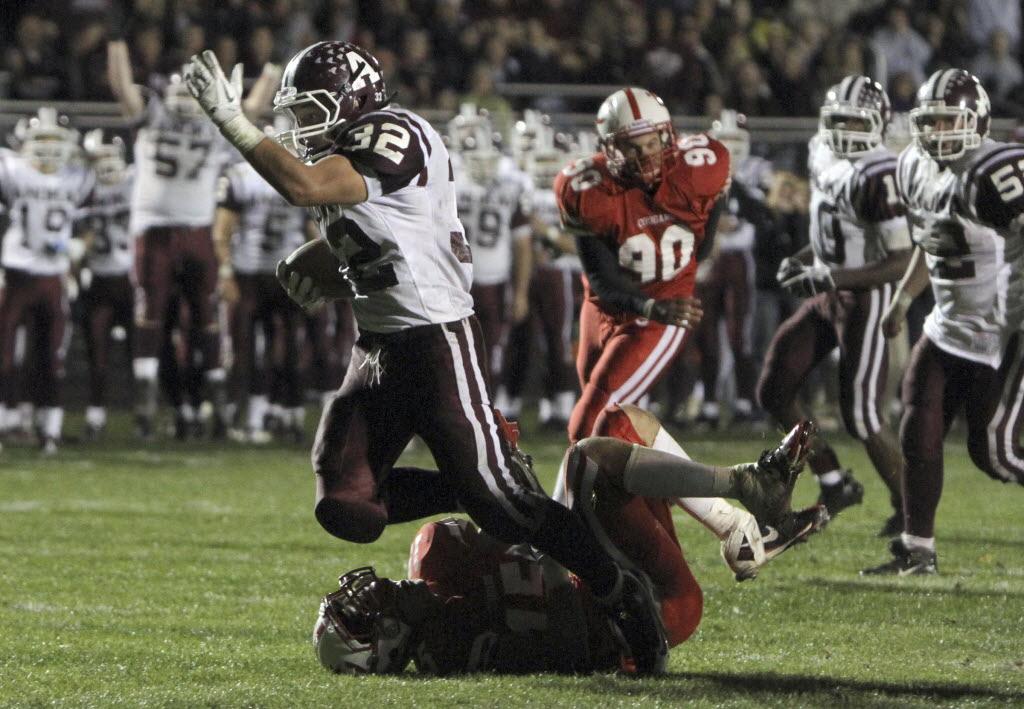 Josh Werness, shown here rushing for a touchdown in a game against Centennial on Sept. 30, 2011, is one of 88 players competing in the Minnesota High School All-Star football game Saturday at St. Cloud State. He will play fullback for the North team. Pho

The Minnesota High School All-Star football game will be played at 1 p.m. Saturday at St. Cloud State. There are 88 players -- and at least that many stories -- on the rosters of the North and South teams. Here's a look at three of the players invited to play -- Nick McBeain of Shakopee, Charles Webb of Minnetonka and Josh Werness of Anoka -- who are moving on to the next stage of their football lives with something to prove. Nick McBeain

Through the first five games of the 2011 season, all was right in McBeain's world.

He had more than lived up to his preseason reputation as one of the metro's big hitters, racking up 62 tackles. He was also coming into his own as a fullback, finding out what life was like on the other side of the line of scrimmage, using his 6-0, 235-pound frame to overwhelm opponents.

The Sabers were undefeated. McBeain was realizing a lifelong goal of getting attention from Division I football programs.

His present was flawless, his future ripe with possibilities.

But McBeain's gridiron fortunes plummeted last Oct. 7, when a teammate rolled up on his knee in a 10-7 victory over Holy Angels.

That popping sound was McBeain's ACL tearing, but it might as well have been sound of his dream bursting. His senior season was over. The college recruiters who had been in regular contact were suddenly absent.

"With colleges, you know how it works," McBeain said. "Something like this happens, and most of them go away. My big hopes went away."

McBeain has spent the past six months working tirelessly to rehab his knee back into playing shape. The weight room has become his second home.

"At first, all I could do was bench presses," he said. "My upper body got a lot stronger. Now that I've been working with a physical therapist, I'm squatting 85 pounds more than I did before the injury. I'm up to 585 pounds."

McBeain accepted an invitation in April to play in the All-Star game, hoping that his knee would be strong enough to allow him to put on his high school helmet one last time.

"But my doctor told me not to play in the game, that he doesn't want me to be cutting and hitting on it quite yet," McBeain said. "But I'm going to go to the training camp and do all the drills. And I'll be on the sidelines during the game."

Another disappointment, considering that Husky Stadium, the site of the game, is where McBeain will be playing for the next four years after signing with Division II St. Cloud State.

"It seems like it's been forever. I can't wait to get out and hit someone," he said. "But I think everything happens for a reason. I learned a lot about football from a coach's point of view. I see myself as a better football player."

Like a true Skipper, Minnetonka defensive back Charles Webb spent the summer before his senior season making waves.

Not on the water, as would befit the school's nickname, but at football camps around the country. At 5-9 and hailing from Minnesota -- not exactly a hotbed of speed and athleticism in the eyes of college recruiters -- expectations were low. By the end of the summer, however, Webb's quickness, agility and ability to close on receivers had generated a substantial buzz.

Buoyed by its defense, Minnetonka finished the season 8-3, falling to eventual Class 5A champion Eden Prairie 6-3 in the Section 6 championship game. Webb, who had been weighing offers from a dozen Division I schools, including Minnesota, Wisconsin and Iowa, was preparing to make the biggest decision of his life.

Focused solely on football, Webb had allowed his schoolwork to slide. Most schools backed off when they realized his grades were not good enough to make him eligible by NCAA standards.

"I didn't know a lot about that kind of stuff, like what I needed to do to be eligible," Webb said. "A lot of the schools that were interested in me, the Big Ten schools, are high academic schools. Almost all of them went away when they saw that my grades weren't there."

Deserted by big-time recruiters, Webb's only option was to go the junior college route, which does not have the same restrictions as the NCAA. Webb committed to play at Iowa Western Community College in Council Bluffs. The Reivers had nine players transfer to Division I programs last year. Webb hopes to do the same after this season.

He's been working out all spring in preparation and said he's excited to play for the South team in the All-Star game.

"I want to get back out there, be a playmaker, get back into the groove," he said. "I want to play a complete game."

After the game, Webb will head to Council Bluffs to get a jump start on the school year, intending to take a summer class or two.

"I want to get ahead of the game academically," he said. "They told me I can come in and compete to be a starter right away. But I learned I have to stay on top of my academics. Hopefully, by the time the year is over, I'll be getting those Division I looks back."

Everything that was asked of him, Josh Werness did. At 5-8 and 205 pounds, Werness is on the small side, but his performance on the field, with fullback strength and tailback speed, more than made up for his size.

He led Anoka in rushing with nearly 1,500 yards in 11 games as the Tornadoes advanced to the Class 5A state tournament quarterfinals. He was named the Northwest Suburban Conference MVP.

His coach, Jeff Buerkle, went so far as to call Werness the best football player in the metro area.

But when it came down to determining his future, Werness' phone was surprisingly silent.

"I had wanted to play Division I football all of my life," Werness said. "After the season started, I was talking to a bunch of colleges and I sent them all highlight films. But I got no offers. I was shocked and surprised."

The excuses were plenty. Not big enough. Not fast enough. Schools were finding other players to be more interesting.

"It was very frustrating," Buerkle said. "No one wanted to give him a chance."

A goal of playing for Minnesota fell away when coaches there told him he likely would not get the chance to play. "They didn't have enough room on the depth chart," Werness said.

Finally Werness, who will play fullback for the North team in the All-Star game with something extra to prove, talked North Dakota State into giving him a shot.

"The running back coach up there liked my potential, so he asked me to come play for them," Werness said. "I always liked it there, so I that's where I'm going."

But not on a scholarship. It seems that Werness still has to prove his worth.

"In the spring, they'll do evaluations again and there's a chance I could earn one," Werness said. "But I just want to go, have a lot of fun, meet some new people and play against good competition."