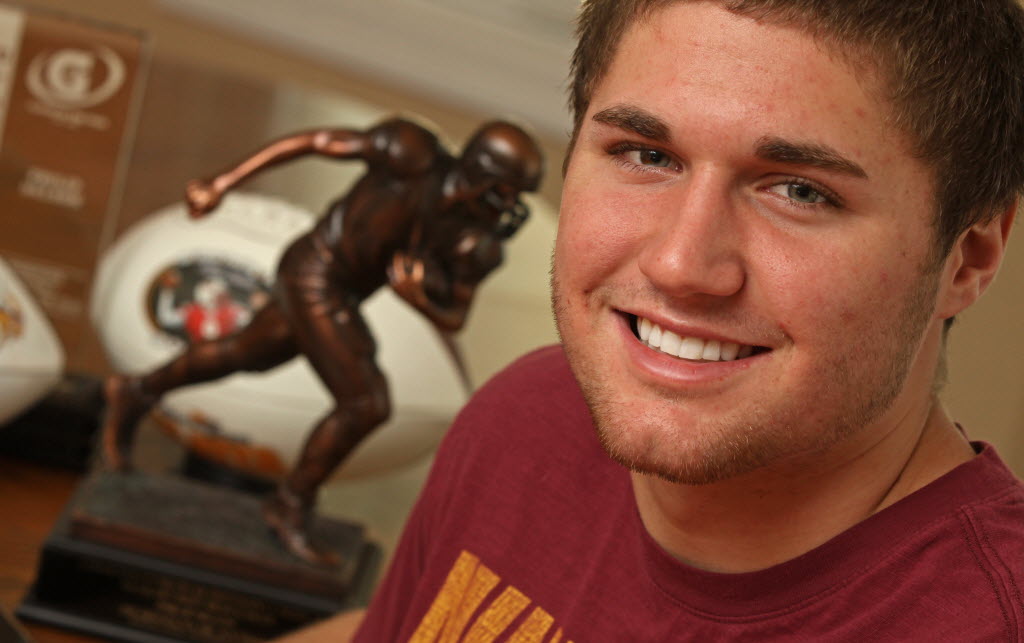 MANKATO - Philip Nelson has a souvenir photo from one of the more memorable days of his college recruitment, a memento that these days drips with more irony than reminiscence.

The high school quarterback, then a junior and the object of an increasingly intense pursuit by Division I football programs, stands holding Paul Bunyan's Axe in the photo, admiring one of college football's most enduring trophies just moments after it was captured for a seventh consecutive season by Wisconsin. Nelson is standing in the Badgers locker room at Camp Randall Stadium, barely a mile from the hospital where he was born, a short drive from the suburban neighborhood where he grew up.
Nelson wasn't asked to make a commitment that October day 15 months ago, and he's glad of that now. In the gauzy euphoria of the moment, the teenager says today, Wisconsin "was pretty tempting." And Minnesota? "No shot," Nelson said with a smile. "I ruled them out right away."
Which is why Nelson, one of the most accomplished quarterbacks in Minnesota high school history, seems almost amused to find himself walking the Minneapolis campus now as an early enrollee attending classes and settling in to college life only a few blocks from TCF Bank Stadium.
Nelson, ranked by longtime recruiting expert Tom Lemming as the fourth-best senior QB in the nation, is the signature member of Jerry Kill's 2012 recruiting class. On Feb. 1, he'll become perhaps the most prominent Gophers recruit to sign since MarQueis Gray – a senior-to-be and the incumbent starting QB.
"It's funny how things change," Nelson said. "Right away I was like, 'Oh yeah, Madison, Madison, Madison.' But it's not like cheering for a team as a fan. It's too important – it's your life, what your life will be like the next five years. It's going to be who you are, so you have to picture that, not just, 'Oh, I root for this team.'"
If only some grown-ups had such a grown-up attitude. Nelson has heard the occasional taunt, mostly in jest, from Badgers fans and especially old friends in Wisconsin. But his parents, who met at Wisconsin and raised their three kids in Sun Prairie, only 10 miles northeast of the Madison campus until moving to Mankato seven years ago, received less-lighthearted flak over Philip's decision.
"I took a lot of phone calls when [his son's commitment] was announced. 'How could you dare be a Badger and let your kid go play at Minnesota?'" said Pat Nelson, Philip's father and a Wisconsin alum. "I was surprised at how worked up people got."
When Pat was offered a job in 2005 managing food-ingredients plants in Minnesota, he moved his family to Mankato, an event that Philip recalls as traumatic for a 10-year-old. "I was not a happy person. I fought it. I declared I'd never like Minnesota, and that I'd move out and go back as soon as I can," he said, and his older sister, Meredith, followed through by enrolling at Wisconsin two years ago. Philip's position obviously has softened, though he still said, "Madison will always be my hometown. You can never forget where you come from." 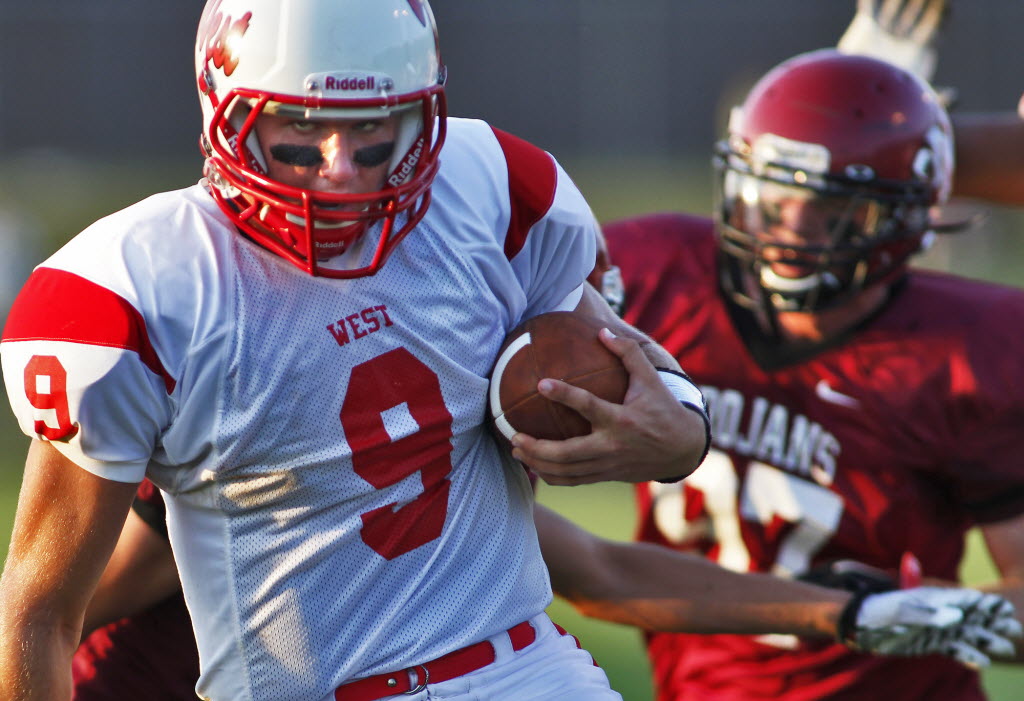 If Nelson's Big Ten career at Minnesota is anything like his Big Nine accomplishments at Mankato West, the Badgers never will forget where he went. Nelson was a talented, if a little scrawny, quarterback for the Scarlets who announced himself with a four-touchdown debut in his lone start as a freshman. He racked up yards, touchdowns and victories during the next two seasons but emerged to national notice by growing to 6-3 and 223 pounds, and engineering a brilliant senior year.
That year featured more than 4,000 yards of offense including 1,243 rushing yards, and 55 touchdowns in only 12 games, the first 11 of which were victories. (The top-ranked Scarlets lost to Bemidji in the Class 4A semifinals.) He set a state record with 135 career touchdowns, and his 7,564 passing yards and 94 scoring passes rank second in Minnesota history. He was named Mr. Football by the state's high school coaches, Minnesota Player of the Year by the Associated Press, and the state's MVP by Gatorade. He was invited by the Vikings to act as honorary captain before an NFL game, and drafted by the Marines earlier this month to play in the Semper Fidelis All-American Bowl.
Beyond the accolades, though, Nelson is "exactly what [Gophers coach] Jerry Kill would want in a quarterback," said Zach Johnson, publisher of Gopher Illustrated, the local rivals.com affiliate. "He's a pro-style passer who can hurt you if you don't respect his ability to tuck the ball and run. Just like Chandler Harnish -- he's the perfect fit for what Kill wants out of a quarterback." Harnish was Kill's quarterback at Northern Illinois, and last season rushed for more yards than any QB in major college football.

Nelson also is a soft-spoken, attention-deflecting athlete who sounds more proud of his ability to dunk a basketball in junior high school than racking up touchdowns. He used to enjoy basketball more than football, and even named the family dog "Kobe," but he injured his left knee during a game as a freshman and gave up the sport.
He's a 3.6-GPA student who graduated a semester early to get a head start on college. He's a humble leader who becomes more animated talking about his younger sister Lindsay's soccer ability than his own athleticism, who shrugs at his trophies and insists he'd trade them all for the state championship that eluded the Scarlets. He takes time after games to pose for pictures with the grade-school kids who flock to him looking for wristbands and autographs, and shake hands with admiring adults.
"If none of this was happening, if I was overlooked, that would be fine with me," Nelson said. "But I've even met Gopher fans who drive down to Mankato to watch me play. It's amazing how excited people get."
Kill and his staff were among the most excited almost a year ago, when Nelson reversed his opinion about the Gophers. Kill reached out to Nelson only hours after he was hired at Minnesota in December 2010, making it clear that he wanted a chance to make a case for Nelson staying home. That impressed the teenager, who had explored campuses at Iowa State, Iowa and Wisconsin more than once, but other than a brief conversation with Cyclones coach Paul Rhoads, had never met a head coach.
"He talked to me one-on-one, not through an assistant. He said, 'We've been keeping track of you, we've watched film of you. You're our first offer at quarterback – you're our only one right now,'" Nelson said.
Once quarterbacks coach Jim Zebrowski followed Kill from Northern Illinois, he overwhelmed Nelson with attention and information, and pointed out that Kill's staff stays together. That meant a lot, Nelson said, especially because Wisconsin's staff has had so much turnover. "Coach Z, he's crazy," Nelson said. "He's a young guy, and he eats and sleeps football. I got to like him right away and he liked me right away. I know I can learn a lot from him."

Former Mankato West quarterback and future Minnesota Gophers quarterback Philip Nelson's congratulations letter from the U was hung next to an article from his dad's, Pat Nelson playing days at the University of Wisconsin. Bruce Bisping, Star Tribune

Nelson was surprised at how quickly he made up his mind. He accepted Kill's scholarship offer in February and asked his high school coach to deflect all other recruiters.
"There's something that intrigues me about being part of a turnaround in your home state," Nelson said. "Anybody can go to a school that has a great tradition, but six years from now, if this thing is turned around and I'm a part of it, you'll be saying, 'This was the class that did it, this was the team.' I want to be part of that."
Even if it means disappointing his former hometown. "When Philip arrives in Madison as the quarterback someday, he's going to have a target on his back the size of Texas," Pat Nelson said. "It's going to be crazy. But I think he relishes that challenge."

• MarQueis Gray is the Gophers' presumed starter at quarterback for his senior season next fall, which likely means Nelson will spend 2012 learning the offense as a redshirt. "If that's what the coaches want, that's fine," Nelson said.
"MarQueis is such a great athlete, there's going to be a spot for him in the NFL some day."
Once Gray graduates, Nelson will be part of a pool that figures to include Tom Parish, Max Shortell and fellow 2012 signee Mitch Leidner of Lakeville South.
"There's going to be competition no matter where you go," Nelson said.
• Nelson's roommate at Minnesota is wide receiver Isaac Fruechte, who is transferring from Rochester Community and Technical College. Fruechte's father, Carl, is head coach at Caledonia High School and once coached Mankato West coach Mark Esch.
"Every offseason, we scrimmaged Caledonia, so I've known Isaac awhile," Nelson said. "Over the summer, I threw to him quite a bit."
• Though many recruiters expected him to end up at Wisconsin, Nelson said Iowa actually was his second choice behind Minnesota.
"They probably worked harder than anyone but [the Gophers], and I really loved the atmosphere at their games," Nelson said. "They have a great tradition."
– Phil Miller, Star Tribune