See who fans voted as the top performer from Sept. 22-24. 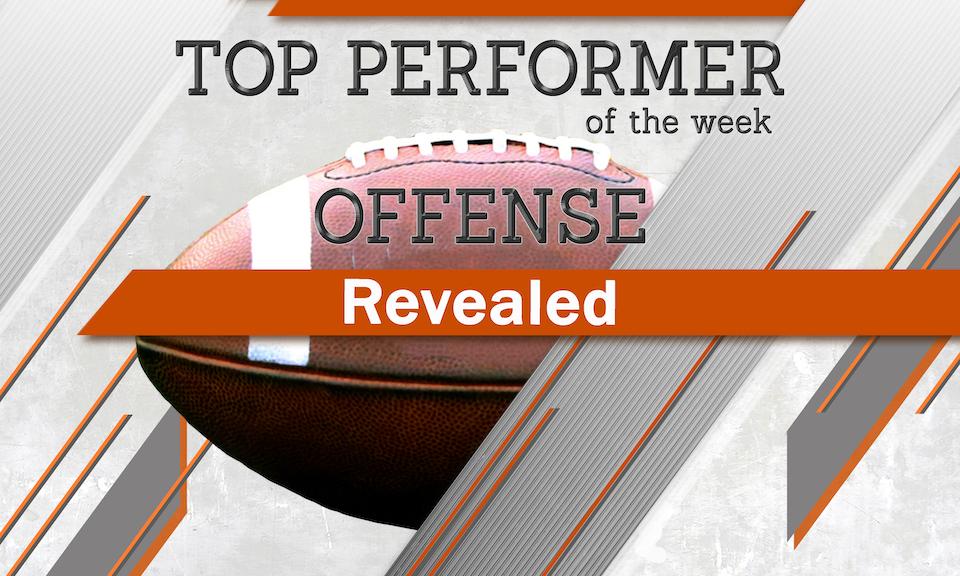 Caden Spence, Zimmerman. The senior running back could be seen all over the field in the Thunder’s 48-7 victory against Foley. Spence was a scoring machine, getting into the end zone six times and totaling 285 rushing yards on 24 carries. His longest touchdown run came on a 52-yard sprint.

Cade Bruett, Delano. The Tigers snapped a three-game losing streak on Sept. 23 in a 27-0 victory against Big Lake. The senior quarterback got the scoring started on a 9-yard rush before tossing a pair of touchdowns through the air. Bruett completed 12 of 16 passes for 164 yards. His 66 completions this season is seventh most in the state and his 835 passing yards sits ninth.

Damon Ferguson, Red Lake County. The Rebels extended their undefeated season to four games with a 26-8 road victory against Warroad. Ferguson led the Rebels’ offense tallying 196 yards on the ground off 28 carries. The senior scored the first three TDs of the game to put the Rebels up by 20 points at the half before getting in on the passing game, completing a 5-yard TD pass late in the fourth quarter.

Declan Gaines, St. Louis Park. The Orioles overcame a 15-point deficit, scoring the last three touchdowns of the game in their 33-28 road victory against Benilde-St. Margaret’s. The sophomore quarterback led the Orioles offense, throwing for 201 yards and three touchdowns, including 37 and 67-yard scoring plays in the third quarter to lead the comeback.

Carson Hansen, Lakeville South. The senior running back nearly couldn’t be stopped in the Cougars 43-21 win over Farmington. Hansen totaled 322 rushing yards, averaging 14 yards per carry. He scored four TDs, three of them for 25 or more yards. Hansen’s 787 rushing yards is fifth most in the state this season and his nine touchdowns is tied for 8th.

Leyton Patzer, Forest Lake. The junior running back came in clutch when the Rangers needed it. Held off the board through three quarters and trailing by eight late in the game, the Rangers handed the ball to Patzer for a 1-yard rushing touchdown to get on the board. Less than five minutes later, Patzer scored the Rangers’ second touchdown, a 60-yard gallop, to put the Rangers up by six with less than three minutes to go. The Rangers defeated Mounds View 14-8.

Jonathan Shrum, Farmington. The senior had his best game thus far in the season last week, accumulating 353 all-purpose yards for the Tigers. He took 18 carries for 143 yards and found the end zone on two occasions, and also took a kick return back 94 yards for a touchdown on the opening play of the game.  Shrum completed eight passes for 100 yards as the Tigers lost to Lakeville South 43-21.

Nick Slater, Nicollet. The sophomore quarterback had a career game to remember as he led the Raiders past Madelia 64-38. Slater completed 16 passes for 408 yards and seven TDs. He added 65 rushing yards on 14 carries.

Elijah Solum, Spring Grove. With the Lions leading by six in the second quarter, the junior quarterback went to work throwing three consecutive touchdown passes. He completed two 37-yard TD passes to finish the second quarter and started the third with a 57-yard TD toss. Solum racked up 217 yards through the air and added 38 rushing yards as the Lions defeated Grand Meadow 47-16.

Caden Spence, Zimmerman. The senior running back could be seen all over the field in the Thunder’s 48-7 victory against Foley. Spence was a scoring machine, getting into the end zone six times and totaling 285 rushing yards on 24 carries. His longest touchdown run came on a 52-yard sprint.