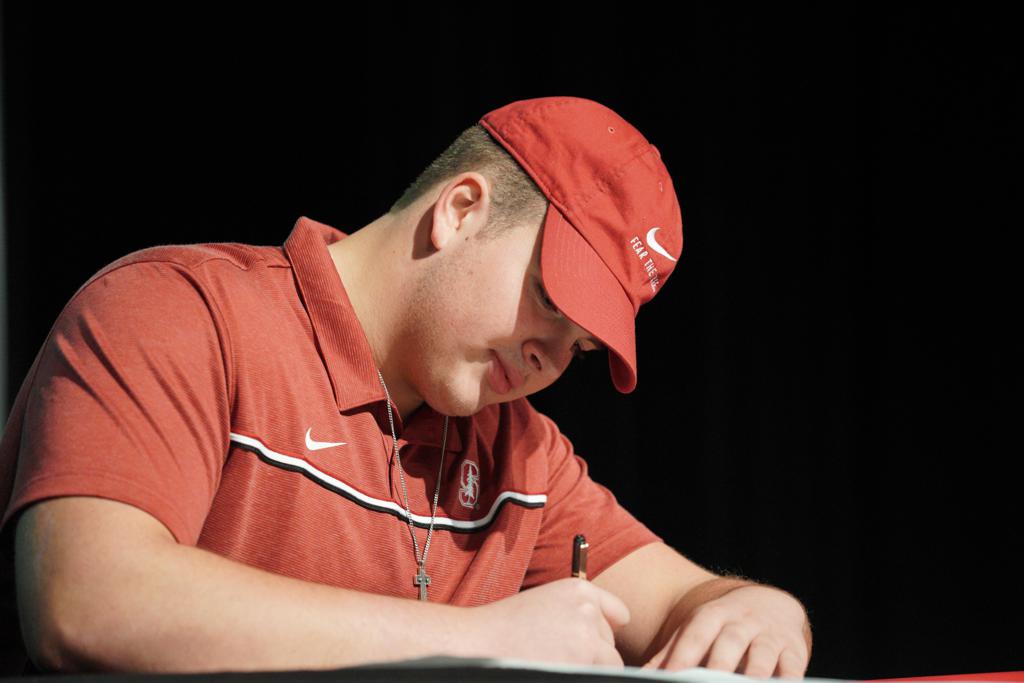 Lucas Heyer made official with his signature what has been known awhile: He'll attend Stanford. BRIAN PETERSON, Star Tribune

Not long after Hill-Murray football standout Lucas Heyer signed his national letter of intent to play at Stanford on Wednesday, the screen at the rear of the school’s auditorium stage displayed the university’s distinctive logo.

The cardinal red block “S” and rendition of the El Palo Alto tree made sense to Pioneers assistant coach Todd Olson, who quipped, “Well, Lucas is a redwood.”

Heyer stands 6-5 and weighs 295 pounds, but his lofty stature goes beyond his dimensions. The four-star offensive lineman stood atop the state’s college football recruiting rankings in the Class of 2022. Though honored by the distinction, Heyer focused less on the hype and more on the hard work.

“For me, it was a big thing for me to back that up by proving myself every day and every game,” said Heyer, who chose Stanford over offers from the Gophers, Michigan, Northwestern and other Power Five schools. “I’ve never been complacent or content, especially as a football player. When I turn on the video on Saturdays, I want to see improvement. And as this year went on, I think I kept playing my best football every week.”

Hill-Murray offensive line coach Joe Cousineau, who held the same job for years at Stillwater, said he considers Heyer “at the top” of the big guys he’s coached. Heyer is ranked 24th among the nation’s offensive tackles by 247Sports.com.

“I don’t know if I’ll ever coach another kid like him,” Cousineau said. “He’s smart and humble and he’s always wanting to learn. We’re playing in what turned out to be our last game of the season, and he’s still asking questions.”

An offensive tackle since he began playing football in sixth grade, Heyer accepted a move inside to left guard as a senior this fall. He relished taking a more active role in an offense that averaged 205.9 rushing yards per game. Likewise, Cousineau enjoyed watching Heyer pull, lead running backs around the end and punish defenders.

Both Cousineau and Hill-Murray head coach Robert Reeves appreciated what they called Heyer’s “nasty streak” on the field. A different persona away from the game endears him to others. Reeves said the hulking Heyer is known for “giving fist bumps to all the eighth-graders in the hallway.” Hill-Murray’s campus minister, Sister Linda Soler, calls herself the “spiritual coach of the football team.” She saw a young man as deep as he is vast.

“He is a silent leader with a heart of compassion for people of all ages and backgrounds,” Soler said.

Wednesday’s ceremony did not signal the start of Heyer’s college football journey. His began more than a month ago.

“Day one started as soon as we lost in the playoffs,” Heyer said. “That game was on a Saturday, and as I was walking off the field, I told my trainer, ‘See you Monday.’”