Resilient and respected, Spencer Alvarez finds his way from Columbia Heights to the U

The tight end will graduate early and begin his time with the Gophers in the new year. 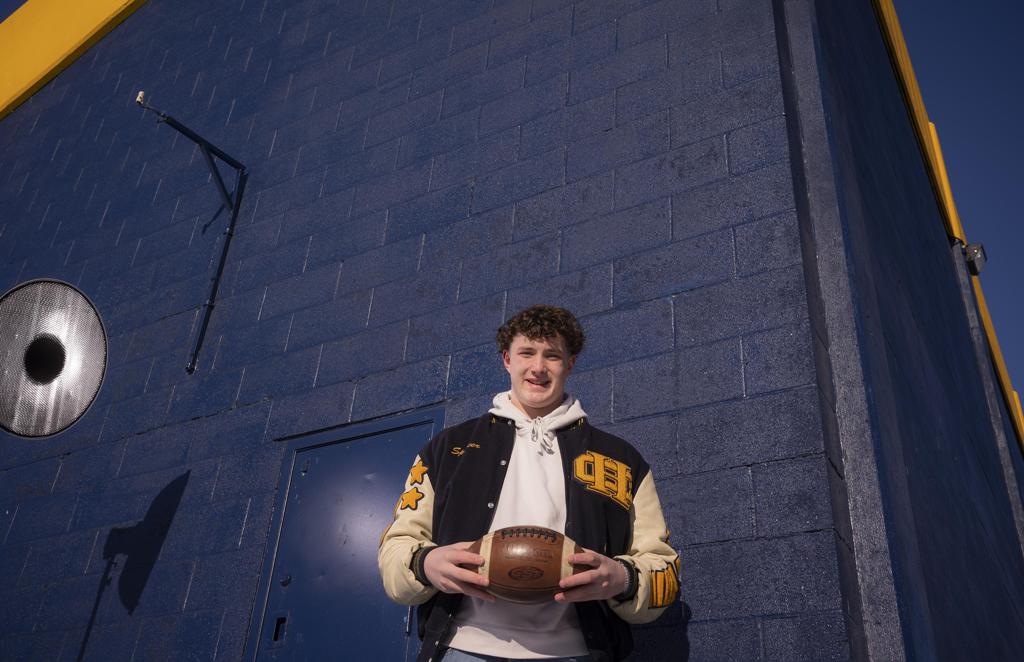 He became a news story himself in June, when he made a verbal commitment to play for the Gophers. Alvarez is believed to be the first Columbia Heights athlete to join a Big Ten football program since 1985 graduate Bill Anderson, who played for Iowa.

The story of Alvarez, who is expected to sign his national letter of intent during a school ceremony at 8 a.m. Wednesday, is a profile in resiliency.

He tore the ACL in his left knee during a football game in November 2020 and returned for the football season this fall. He played several positions, helping lead the Hylanders to a 7-4 finish, the program’s most victories since 2013.

Alvarez looked forward to playing basketball as a senior. Surgery last week on the meniscus in his left knee altered those plans. Though he still helps out on the court at practice, Alvarez plans to graduate from high school in January, enroll at Minnesota and begin working toward playing time at tight end.

Rather than curse his bad luck with injuries, the 6-7, 255-pound Alvarez chooses instead to look forward.

“I’m going to continue to live life and focus on what I can do,” said Alvarez, who begins rehabilitating his injury this week. “I’m hoping to get back to my maximum potential.”

Only an occasional news anchor, Alvarez showed up daily on the football field. He served as a captain for two years. As a tight end this season, he caught 22 passes for 188 yards and two touchdowns and made scores of key blocks. As a defensive lineman, he posted 36 tackles, including 10 for loss.

“We’ve asked him to do a lot,” Columbia Heights football coach Matt Townsend said. “We’d tell him, ‘We’re going to move you here or here,’ and he’d say, ‘OK.’”

Recruited as a tight end, Alvarez ran crisp routes and flashed sure hands.

“He made me look good sometimes,” junior quarterback Matt Rockwell said. “He’s got quick feet and great reach. He was a great target, and I loved throwing to him.”

Alvarez blocked well from the tight end position, too. He set the edge by caving in defensive ends. He steered defensive backs out of the path of Hylanders running backs. As a defensive tackle, he drove opposing guards backward and made stops behind the line of scrimmage.

“He could put 300-pound guys on their butt,” Rockwell said.

Alvarez spoke less of his physical accomplishments than of his contributions beyond statistical measure.

“I tried to let my teammates and coaches know that they could count on me as a leader,” he said.

“He always demanded excellence, for his teammates to be the best they could be and to improve every day,” Rockwell said. “He set a tone of ‘Meet me at this level,’ and the younger guys looked up to him.”

“He watched me do everything and told me that I had a lot of potential,” Alvarez said.

That P word keeps coming up for Alvarez, a lightly heralded recruit from a high school program not known as a power who is working his way back from a knee injury for a second time in as many years.

“Potential gets talked about a lot with me,” Alvarez said. “I always think I can get better, and I know I’ve got to work to have success at that level.”

He has appreciated the faith shown by the Gophers coaching staff.

“They said, ‘We’re going to hold this commitment through any illness or injury,’ and that made the decision easy for me and my family,” Alvarez said.

Soon after Alvarez’s Twitter announcement on June 10, KSTP’s Darren Wolfson interviewed Alvarez on camera as Rockwell and another teammate watched from the stadium bleachers.

“We joked how we will be using him when we play NCAA football on Xbox next year,” Rockwell said.

Hylanders basketball coach Willie Braziel has known Alvarez since the young man was a seventh-grader and said, “I don’t believe I’ve coached a finer student-athlete in terms of character.”

With a nod to Alvarez’s knee injuries, Braziel said, “His middle name should be adversity.”

“He’s gone through some things,” Townsend said, “and he’s worked extremely hard to get back. It has been a pleasure to coach him. I’m excited to see the next steps in his football career.”