Camden Dean indicates he doesn't miss the passing stats as much as he likes winning the state title. 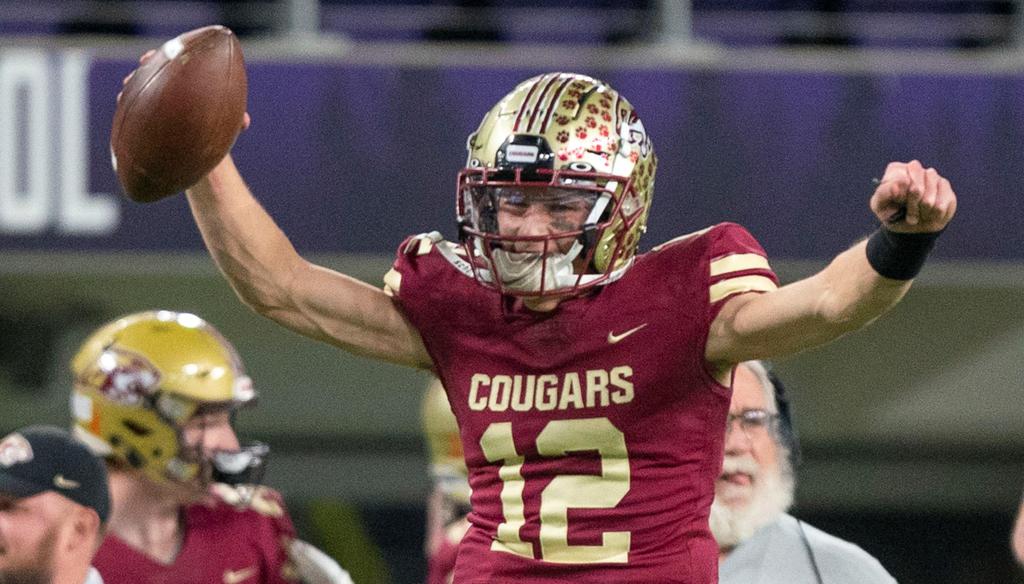 Camden Dean still had energy to celebrate victory after leading Lakeville South to the Class 6A state title.

“As a quarterback, it’s not the most intriguing thing,” Dean admitted after Friday’s Class 6A Prep Bowl.

Dean propelled Lakeville South to a 13-7 victory against Maple Grove not with his arm but with his legs. He led all players with 109 rushing yards and two touchdowns, the second one covering 52 yards late in the fourth quarter.

The Power-T, which features fakes and misdirection, gets defenders’ eyes on the wrong targets. It’s a low-risk, high-reward scheme that keeps the ball and wins games. That’s good enough for Dean.

“I don’t care anymore,” said Dean, who averaged about 50 passing yards per game this season. “We won a state championship. Next year I’m not going to have to run that, but I’m glad we did it this year. Thanks, Coach.”

“He’s always been super generous with his time and with opening up his playbook,” Burk said. “We joke about the whole community of Power-T coaches being a little bit of a cult.”

Hutchinson’s Andy Rostberg won two Prep Bowl championships as a quarterback under his father and coach, Grady Rostberg. He added another title as Grady’s assistant and went on to capture three as a head coach, including Friday’s 42-14 triumph in the Class 4A final against Kasson-Mantorville.

For the younger Rostberg, success is more personally and professionally satisfying when shared.

“For me, having done it, I want them to experience what I experienced,” Rostberg said. “I want to sit back and watch them smile and hug each other. That’s the big thing for me. To know that’s forever now.”

Grady Rostberg, a member of the Minnesota Football Coaches Hall of Fame who retired in 1999, joined his son’s staff.

“He’s our hugger and our high-fiver,” Rostberg said of his 82-year-old father. “He comes down and tells stories and visits with the kids. You win a state championship and he’s on the headset with you — I get more joy watching him get a little skip in his step and a little twinkle in his eye.”

So, we meet again

When Mayer Lutheran defeated Minneota 20-14 in the Class 1A championship game Friday, it was the second time the Crusaders had defeated the Vikings for a state championship this fall.

Mayer Lutheran won the Class 1A volleyball title two weeks ago, beating Minneota 25-15, 25-20, 25-16 in the championship match. The Crusaders volleyball team also won when the schools met in the Class 1A final in 2017 before Minneota won crowns in 2018 and 2019.

Minneota beat Mayer Lutheran 54-21 in the 2017 Class 1A semifinals, the memory of which still haunts Crusaders coach Dean Aurich.

“They were so much bigger and stronger than us,” Aurich recalled. “They were the better team.”

The Minneota girls’ basketball team won Class 1A state titles in 2018, 2019 and 2021. Minneota coach Chad Johnston said the success at his school reflects a commitment to athletes.

“Our community right now has a lot of talent going for it,” he said. “We’ve been fortunate to have a lot of good things going for us.”

Dassel-Cokato’s second-quarter touchdown drive in the Class 3A championship game came within six seconds of breaking the oldest Prep Bowl record still on the books.

The Chargers went 74 yards in 20 plays, with Eli Gillman going over from 2 yards out. The drive took 9:30, falling just short of the record set by Stillwater, which had a drive that took 9:36 in 1984.

The Ponies won the Class 2A championship that year.

Even though his team lost 13-7 to Lakeville South in the Class 6A final Friday, Maple Grove coach Matt Lombardi is excited about the Crimson’s prospects for next year.

In particular, Lombardi singled out junior quarterback Jake Kilzer. “I love my quarterback. He’s going to be a special kid,” he said.

Lombardi compared Kilzer, who made plays with his arm and his legs Friday, to Johnny Manziel in Manziel’s Heisman Trophy-winning college career. “He is Johnny Manziel. He always thinks he can make the play. I’d go to the wall with that kid,” Lombardi said.

Tackles by the dozen
Plainview-Elgin-Millville’s Martin Prieto had a busy Saturday. The senior linebacker set a Prep Bowl record for tackles in a game with 24. The previous record was 21 set by Joel Staats of Winona in 1987.