Minneota, in pursuit of its eighth championship, gave up two TDs in 20 seconds in the first half. 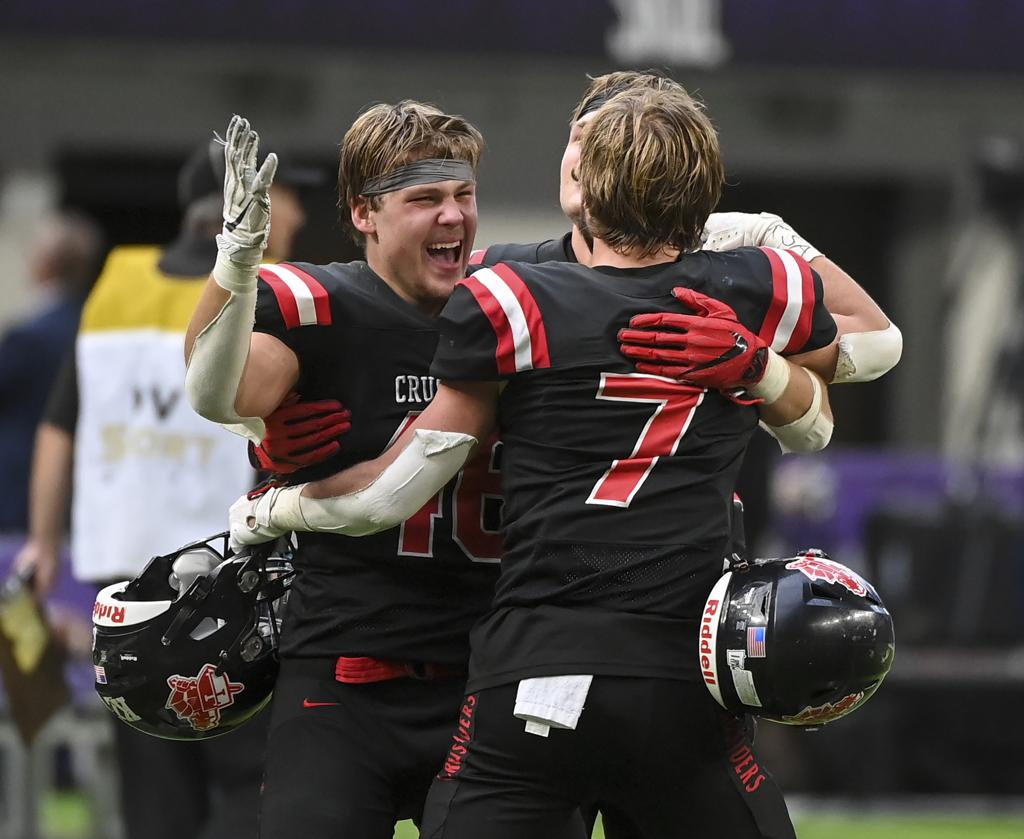 After more than 30 years as a head coach, Mayer Lutheran coach Dean Aurich knows well the pitfalls that can waylay a team in a big game.
Good thing his players are a little more naive.
The Crusaders matched Minneota’s reputation for toughness, and showed a large reserve of their own, en route to a 20-14 victory in the Class 1A championship game Friday at U.S. Bank Stadium.
“I kind of have the personality that I’m a little more scared of the team we play than these guys,” he said, laughing and gesturing toward his players. “These guys are a little more, ‘Hey, we’re ready for them. We can beat them.’ ”
Pregame talk centered on Minneota’s robust style and how Mayer Lutheran would counter. “I was worried,” Aurich admitted.
As it turned out, the Crusaders demonstrated a little orneriness of their own to go along with their cornucopia of talented skill players.
Mayer Lutheran spotted Minneota a 7-0 lead following a typical Vikings drive — 75 yards, 11 plays — but responded with a strength of its own.
Quarterback Ty Hoese found Elijah Jopp for 35 yards to start a drive. Three plays late Hoese hit Sam Dennis on a swing pass out of the backfield. Dennis outraced the Minneota defense to the end zone on the 41-yard play, cutting the deficit to one, 7-6.
This stretch turned crucial when Minneota fumbled the ball away on its next play from scrimmage. Two plays and 20 seconds later, Cole Neitzel scored the first of his two touchdowns on a 13-yard run, giving Mayer Lutheran a 13-7 lead.
It appeared Minneota would go into halftime trailing for the first time all season until Jonah Gruenes turned a Mayer Lutheran mistake into a touchdown, catching a pass from quarterback Isaac Pohlen and dragging much of the Mayer Lutheran defense into the end zone for a 22-yard touchdown and 14-13 halftime lead.
Mayer Lutheran came out after halftime and regained the lead for good, on Neitzel’s second touchdown, a 6-yard run.
The game turned defensive after that, with neither team threatening to score.
“We were just a little bit bigger and more physical than they thought we were,” said Hoese, who completed 12 of 26 passes for 142 yards and a touchdown.
“We just hit harder than they did,” Jopp said.
Minneota coach Chad Johnston conceded that the Vikings faced a team that was physically their equal.
“Mayer Lutheran’s got a lot of talent so we knew we couldn’t make a lot of mistakes,” Johnston said. “I don’t think we gave our best game today, but give a lot of credit to Mayer Lutheran and the talent they have.”

Mayer Lutheran got a 7-yard touchdown run from Cole Neitzel in the third quarter to take a six-point lead, then leaned on its defense to keep Minneota off the board for the rest of the game Friday, emerging with a 20-14 victory in the Class 1A championship game.

Minneota went up 14-13 just before halftime on a 22-yard scoring reception by Jonah Gruenes, who carried at least three Mayer Lutheran tacklers into the end zone.

It’s Mayer Lutheran’s first state title, and it comes in its first trip to the Prep Bowl. Minneota (13-1) was seeking its eighth state championship.