The Crusaders scored two touchdowns in the first five minutes and rolled from there. 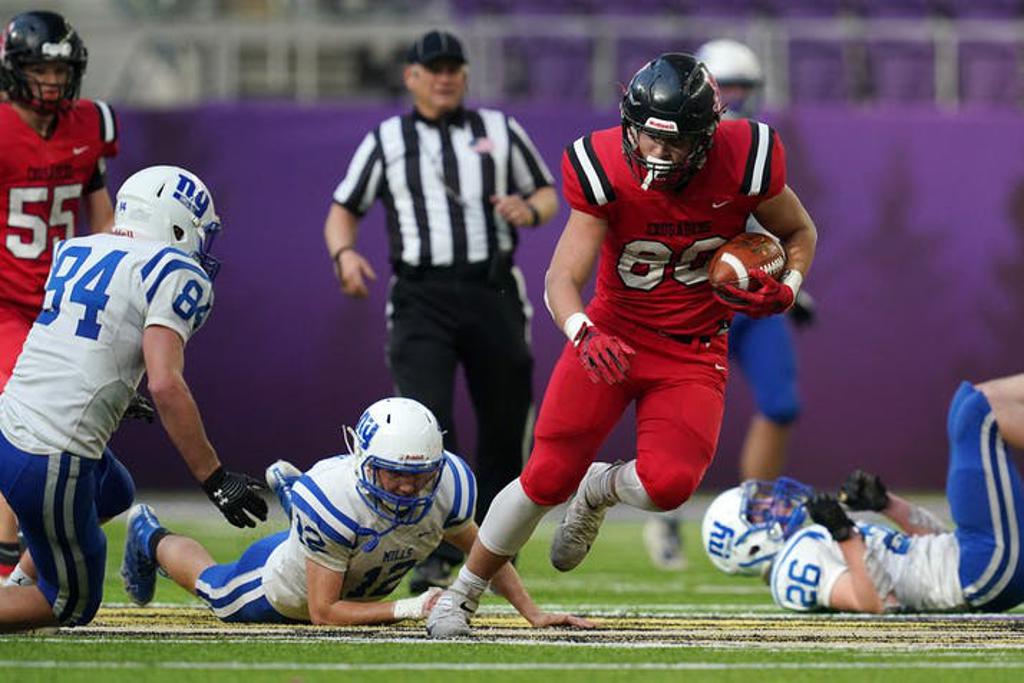 Even he admitted that what he saw didn’t do justice to what the Crusaders are capable of.

Mayer Lutheran scored two touchdowns in the first five minutes of the game and cruised to a 41-6 victory, sending the Crusaders (12-1) to the Prep Bowl for the first time in school history.

“I felt like they could throw the ball, but they threw it really well,” Radniecki said. “We didn’t see that so much on film, because they dominated a lot of their games. [We wondered] how good are they?”

So good that New York Mills (10-2) spent most of the game chasing Mayer Lutheran players. Quarterback Ty Hoese — the third generation of his family to play the position at the school — completed just nine passes, but five went for touchdowns.

Mayer Lutheran coach Dean Aurich said he wasn’t surprised how well Hoese threw the ball. The Crusaders had been remarkably efficient in a recent practice in a local dome.

“I’ve never seen our team connect like that. Talk about dimes [Ty] threw,” Aurich said. “We were on. Today, he was laying them out there. He’s got some talent.”

Hoese hit his exceptional tight end Teigan Martin for a 33-yard touchdown on the Crusaders’ second play from scrimmage. He found Elijah Jopp for scores of 40 and 62 yards in the second quarter for a 28-6 halftime lead.

After building that lead, Aurich said he worried a little that his team might have lost its edge.

“I thought we dropped a little bit,” said Aurich, who will be making his first Prep Bowl appearance after 40 years at Mayer Lutheran.

No worries. Hoese and his fine set of receivers injected a much-needed dose of adrenaline after halftime with scoring passes of 15 yards to Samuel Dennis and 43 yards to Abram Jopp in the third quarter.

Hoese said that playing in U.S. Bank Stadium was a definite factor in his success.

“We have playmakers all over the field,” Hoese said. “They had to pick and choose who they had to stop and that really helped us throwing it deep. In here, there’s no wind. You can just let ’er rip.”

Photos from Saturday's semifinal by the Star Tribune's Anthony Soufflé.