Class 6A semifinal: No. 1 Lakeville South takes advantage of takeaways in 40-14 rout of St. Michael-Albertville

The Cougars turned fumble recoveries into touchdowns early on and rolled from there to stay undefeated. 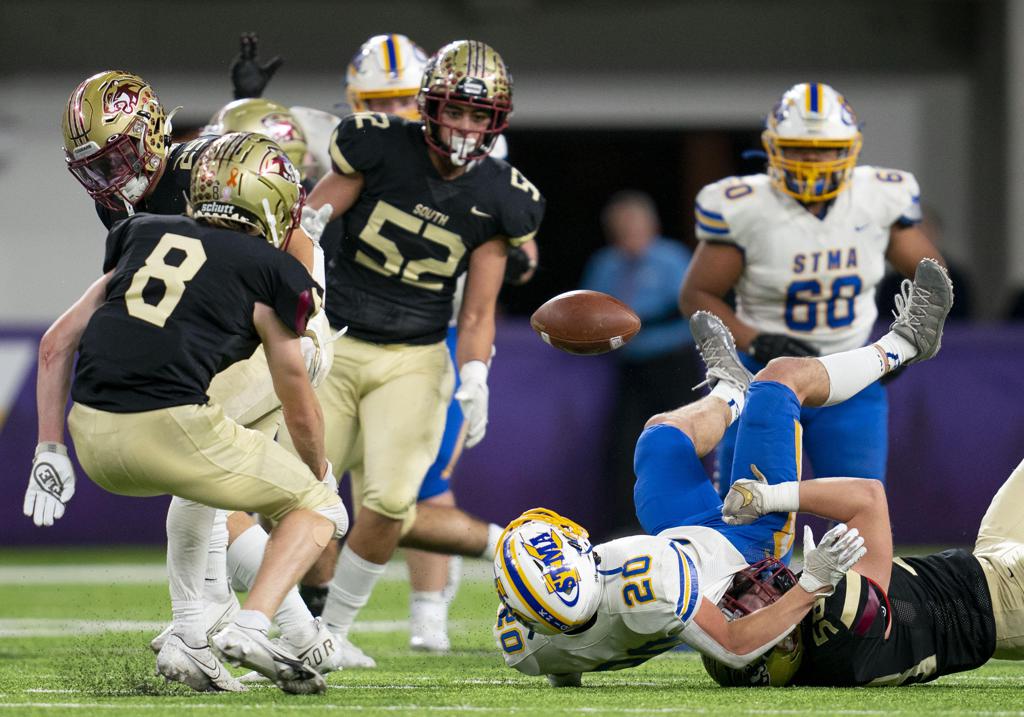 St. Michael-Albertville running back Jarrett Bennett fumbled against Lakeville South on Friday night — one of three StMA fumbles in the first half. (Alex Kormann / Star Tribune)

Lakeville South’s football team borrowed it Power-T offense from Elk River, a formation using misdirection and fake handoffs to spring its various ball carriers for long gains whether running inside or wide to the outside.

Teams less acquainted with the formation look lost at times. St. Michael-Albertville isn’t one of those teams. Coach Jared Essler and the Knights used to reside in a conference with Elk River.

Top-ranked Lakeville South won the physical battles throughout its 40-14 romp Friday in the Class 6A football state tournament semifinals.

A year ago, when COVID-19 concerns cancelled the state tournament, the Cougars hosted St. Michael-Albertville with a mythical football state championship bid on the line. The Cougars struggled with the Knights’ physical play before escaping late with a one-point victory.

No such drama existed Friday. Turnovers hurt St. Michael-Albertville (7-5) from the start. Fumbles on their first two drives derailed the Knights’ plans.

“It’s not part of the recipe,” Essler said. “They are a good team, and we were hoping to limit their possessions. And they had too many of them.”

The Cougars maximized the resulting short fields each time. Junior running back Carson Hansen scored on runs to the left of 38 and 31 yards for a 14-0 lead on just three offensive plays.

St. Michael-Albertville flipped the field with a punt to South’s 20-yard line. No matter. Quarterback Camden Dean capped the longer drive with a 23-yard touchdown pass to Chase Androff.

Dean later dropped a deep ball into Hansen’s hands for a 34-yard score and a 27-0 halftime lead.

“You have to get stops,” Essler said. “You have to beat them by being physically tough enough and assignment-sound. They are a great, physical team with a lot of speed.”

South’s Ben Burk appreciated his team’s ability to control the line of scrimmage.

Senior linebacker Zachary Juckel felt his team, pushed around last year before regrouping, packed a punch from the start this time.

“We’ve been grinding really hard all year, getting stronger and getting faster,” Juckel said. “We come out every game thinking we’re the more dominant physical team and that’s the way it happened tonight.”

Photos from the game by the Star Tribune's Alex Kormann.