The Royals scored 20 unanswered points to beat the Irish on Friday, using the Wildcat formation, a play the Royals hadn't used in a game all season.. 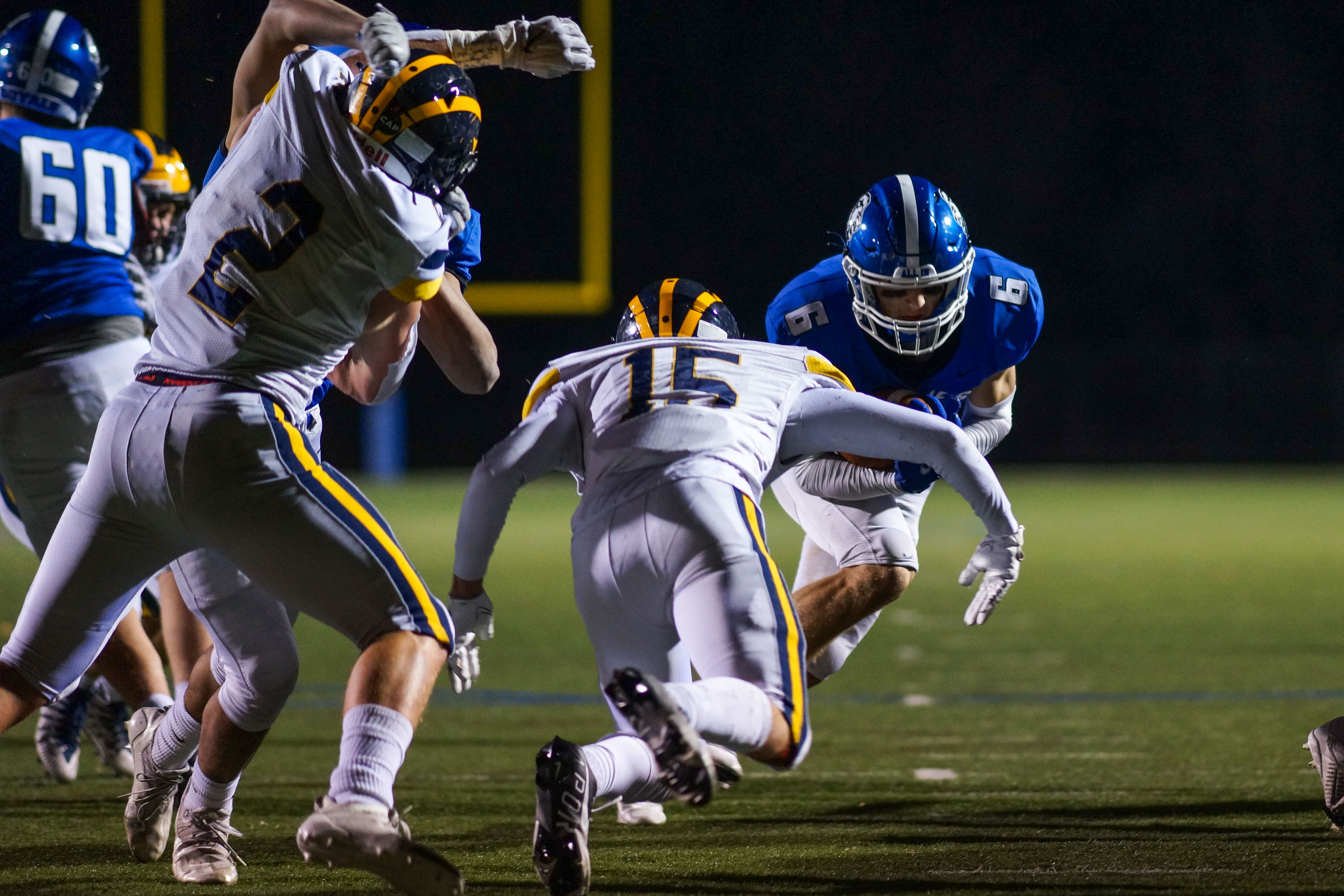 Woorbury senior Joey Gerlach (6) barrels towards the goal line Friday night for his second of two touchdowns in a 20-3 win over Rosemount. Photo by Korey McDermott, SportsEngine

The postseason offers a great opportunity to empty the playbook for high school teams looking to keep a season alive.

Facing Rosemount and a stiff wind Friday, Woodbury's offense opened up a new look in a 20-3 win in the second round of the Class 6A state tournament. Running the wildcat for the first time in a game, the Royals scored the game's only two touchdowns on a challenging night to run an offense. 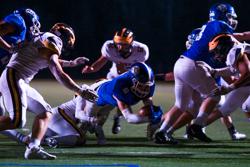 Joey Gerlach took the direct snap and ran six yards for a touchdown with 11:58 left in the second quarter, giving Woodbury (9-1) its first lead of the night, 7-3.

With less than five minutes left in the third quarter, Gerlach again pushed the ball across the goal line in the wildcat to put Woodbury ahead 17-3.
"We knew exactly what to run," Gerlach said about using the formation for the first time this season. "We knew what guys could fill what positions. They all knew their assignments, and we executed it tonight."

Woodbury had rehearsed the formation in practices throughout the season. But head coach Andy Hill said they never had the opportunity to use it in a game.

But in a crucial game against Rosemount (5-5), that changed.

"The is a game to go to state; you don't leave anything hidden on the shelf," Hill said.

While the Royals' offense found a way to succeed, including two additional field goals from kicker Scott Hanson, the defense kept Rosemount from making progress on the scoreboard.

Irish kicker Leyton Simmering knocked down a 48-yard field goal to add the game's first three points of the night early in the first quarter. But Rosemount (5-5) did not score the rest of the game, while Woodbury's defense and special teams forced three turnovers.
Hill gave credit to assistant coach and defensive coordinator Burt Roberts, who was his coach as a Woodbury student.

"They are going to be a challenge, next week, for whoever we play," Hill said about the defense.

Woodbury is next set to face Maple Grove on Thursday, Nov. 11 in Eden Prairie. The Crimson finished a 42-13 win vs. East Ridge later Friday.

Advancing to the Class 6A quarterfinals is no small feat, but players like Gerlach said they had a feeling the season could be special when the Royals started practice back in August.

"We had the chemistry right away," Gerlach said. "All the guys were friends, all the guys were always hanging out with each other. We've always got each others' backs, and that's really all it takes to have a great team."

Friday's loss ended an up-and-down season for a Rosemount (5-5) team that battled a challenging schedule.

The Irish dropped four consecutive games in the middle of the regular season, with three losses coming against teams ranked in the most recent state polls. And Woodbury, No. 8-6A in the Oct. 26 Associated Press ranking, added another loss to a ranked team Friday.

"They are a good squad, they deserve it," head coach Jeff Erdmann said. "They earned it." 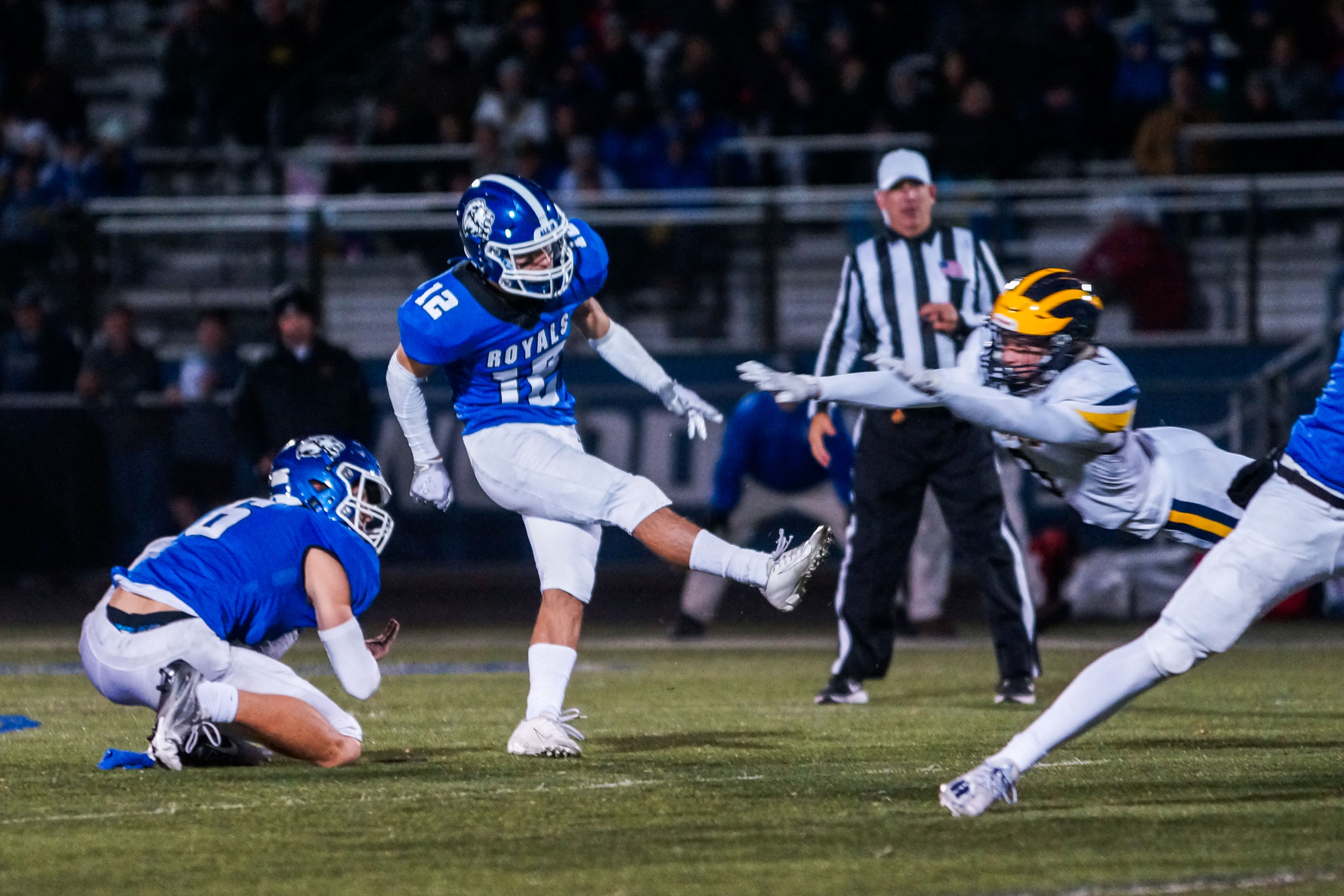 Joey Gerlach and the Woodbury offense overcame both the wind and opposing Rosemount in a 20-3 win vs. Rosemount in the second round of the Class 6A state tournament.

Trailing 3-0, a fumble recovery by Woodbury’s Ugonna Okeke returned into Rosemount territory helped set up a Gerlach 6-yard touchdown run. The fumble recovery was one of three turnovers for Woodbury (9-1).

Gerlach added a two-yard touchdown run in the second half, putting the Royals ahead 17-3 with 4:48 left in the third quarter. 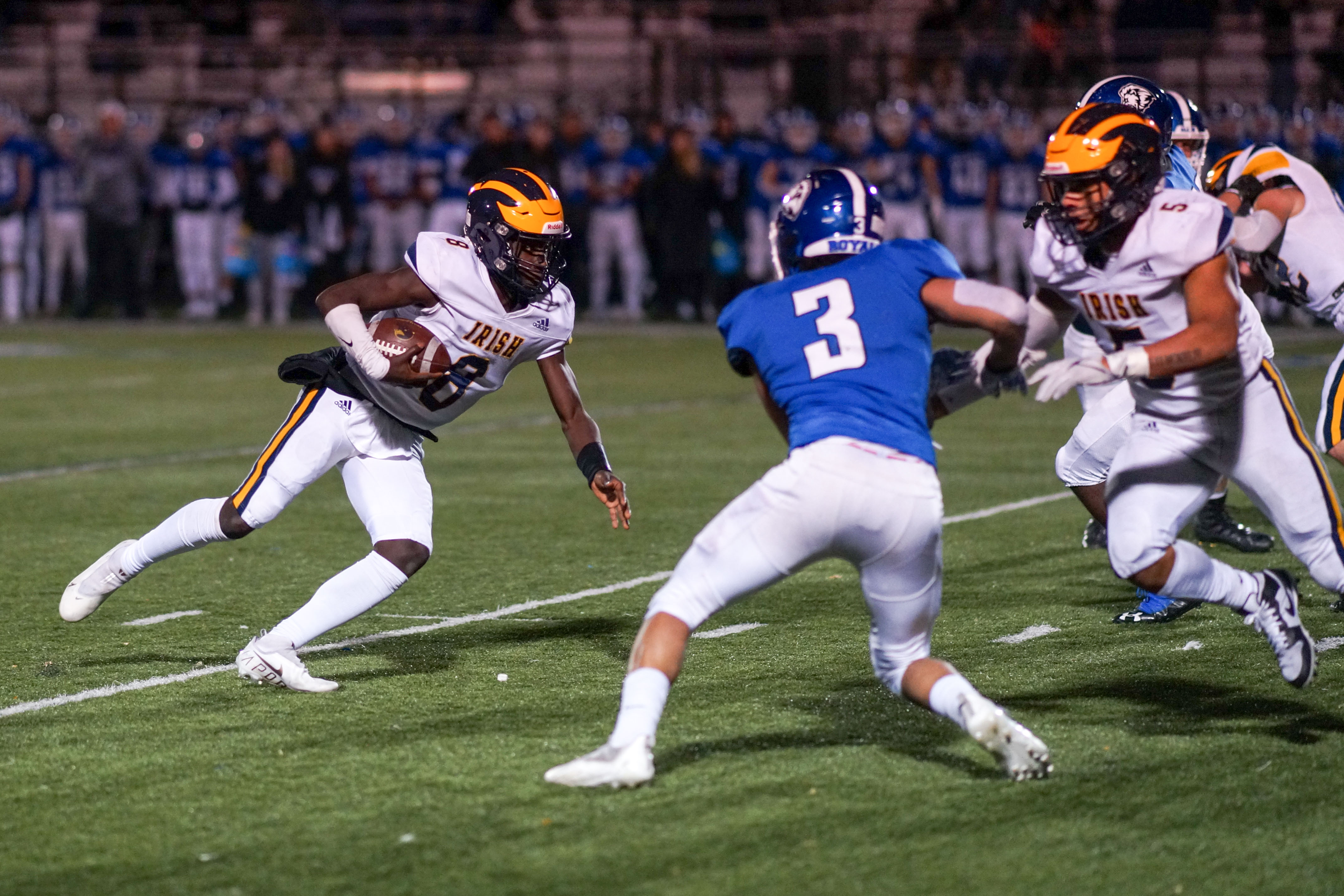 Rosemount starting quarterback Vincent Pyne (8) called his own number for a run against a strong Royals defense on Nov. 5. Photo by Korey McDermott, SportsEngine