No. 2 Eden Prairie knocks off previously undefeated No. 4 Stillwater 28-21 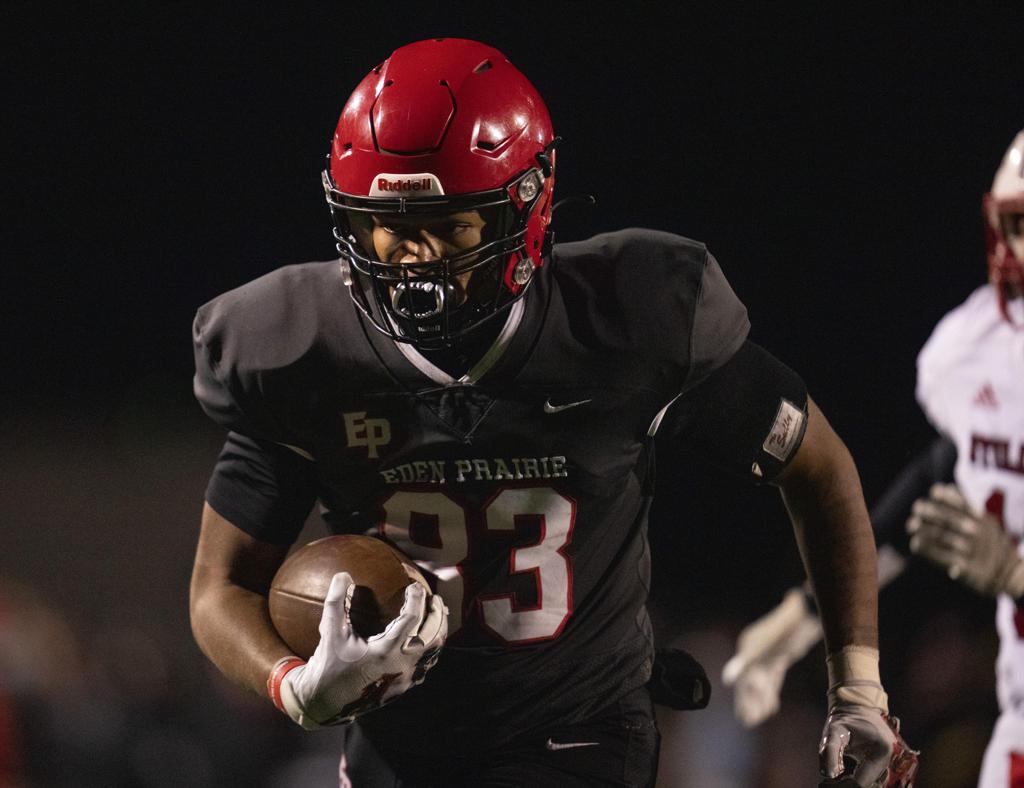 Jermell Taylor hauled in a 40 yard touchdown pass late in the fourth quarter to give the Eagles a win over undefeated Stillwater. [Jeff Wheeler, Star Tribune]

An improvised play won the game in Thursday’s showdown of football heavyweights.

His 40-yard touchdown pass over the top to Jermell Taylor gave the Eagles a 28-21 lead with 48 seconds remaining, a lead they didn’t lose.

“I don’t know why he didn’t throw the slant,” Grant said. “He just ad-libbed. That wasn’t coaching, that was just Fazi running around in a circle and Jermell knowing to go deep.”

Taylor’s keen instincts were bested by his concentration as the ball sailed his way.

“I’m not going to lie, I was a little nervous that I might drop it. But I caught it,” said Taylor, who has four touchdown receptions this season.

Minutes earlier, Stillwater drew even at 21-21 on a pair of clutch scoring throws. Quarterback Max Shikenjanski hit Joseph Hoheisel for a 9-yard touchdown pass. Shikenjanski added the two-point conversion on a toss to Mason Wilson.

“It was exciting, but we knew the game wasn’t over and that they would respond,” Shikenjanski said. “They are one of the top teams in the state.”

Neither team was perfect. Stillwater (7-1) had three turnovers in the first half. The Ponies also got inside the Eagles’ 5-yard line twice and produced no points. Eden Prairie, meanwhile, missed two field goal attempts.

When it mattered, Eden Prairie (7-1) answered with the winning touchdown. Stillwater’s talent, effort and resiliency offered a comeback to doubters just the same.

Class 6A schools are competing in Gold and Maroon districts this fall, a lopsided separation of proven playoff performers and programs without much postseason success of late. Since 2012, the 16 Gold teams accounted for nearly 80% of the state tournament appearances. This includes Eden Prairie. Meanwhile, the 14 Maroon teams accounted for 20%. This includes Stillwater.

When the two districts crossed over for 12 games Sept. 2, Gold teams went 11-1 and outscored Maroon teams by a combined 449-74. Stillwater was the lone Maroon team to win that evening. But even as the Ponies kept winning, they remained questionable by association.

“Like our coach said, there is no one we’d rather play the last week of the season,” Shikenjanski said. “We couldn’t control our schedule, but we showed tonight that we could compete against one of the top teams in the state. And we’re still one of those teams, too.”

A touchdown pass with less than a minute remaining allowed Eden Prairie to escape with a 28-21 victory against previously undefeated Stillwater.

Quarterback Nick Fazi hit Jermell Taylor for a 40-yard score late in the fourth quarter, the final blow Thursday as No. 2 Eden Prairie (7-1) put the first mark in the loss column for No. 4 Stillwater (7-1).

Stillwater had drawn even at 21-21 as quarterback Max Shikenjanski hit Joseph Hoheisel for a short touchdown pass. The Ponies added the two-point conversion.