The Falcons ran just two plays in the third quarter. 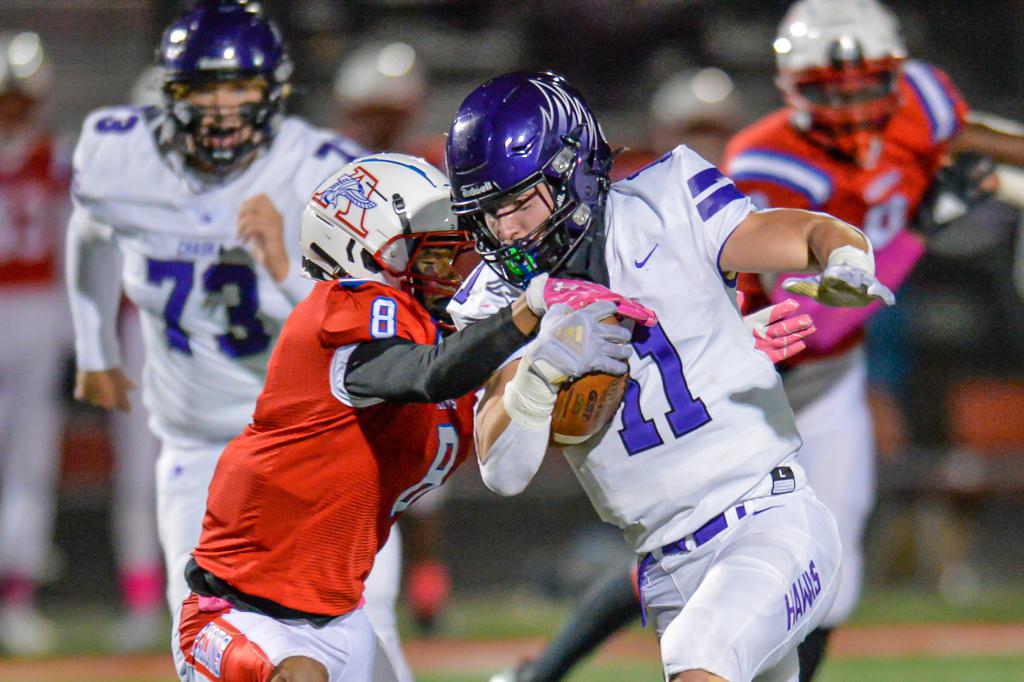 Armstrong’s stadium staff concluded Friday evening’s festivities by blaring Rick Astley’s 1987 smash “Never Gonna Give You Up,” possibly the most un-football choice ever.

Then again, the song fit visiting Chaska, which dominated a showdown of ranked teams by playing keep-away with the ball throughout a 17-6 victory.

Chaska (7-0), ranked No. 4 in Class 5A, asserted control with its no-frills running game and senior running back Jack Boyle in particular. He carried 42 times for 166 yards. 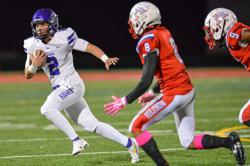 A short touchdown run from Boyle, and another by senior quarterback Brayden Sanders, built a 14-0 halftime lead. In the first half, Chaska converted three times on fourth down, the last of which propelled its second scoring drive.

“We take a lot of pride in being able to pick up one or two yards when we need them,” Hawks coach Bryan Dahl said. “Our guys are chomping at the bit every fourth down. They want to go for it no matter where we are on the field.”

An offense with no intent of giving up the ball was Chaska’s best method for diffusing No. 9 Armstrong (5-2). Dropped passes and other mistakes hurt the Falcons’ explosive offense. The Hawks didn’t give them second chances.

“We’re kind of a big-play team and we left a few of them out there early,” Armstrong coach Jack Negen said.

Boyle, who picked up hard yards by the bushel, kept Chaska moving on its first possession of the second half. Lining up in the wildcat formation and taking a direct snap, Boyle followed a rebuilt offensive line missing two starters and kept surging forward. He converted twice on fourth down. A third attempt, this one from the Falcons’ 20-yard line, was stopped.

Back in business, the Armstrong offense failed to take flight. A run, followed by an interception, were the Falcons’ only two plays in the third quarter.

Trailing 17-0 in the fourth quarter, Armstrong scored on a 38-yard strike from Jamen Malone to Marquan Tucker.

Friday marked the teams’ fifth consecutive meeting since 2017. Both coaches said these games provide a good measure for what postseason success requires.

“You kind of see where you’re at against a team like this,” Negen said. “But we’re not done. We feel like we’re a pretty dang good team going into the playoffs. We’ve just got to make some plays.”

Chaska (7-0), ranked No. 4 in Class 5A, didn’t allow No. 9 Robbinsdale Armstrong (5-2) much time to play offense. The Hawks, relying heavily on their no-frills running game, converted on fourth down several times to maintain long drives.

They led 14-0 at halftime on 2-yard touchdown runs by seniors Jack Boyle (running back) and Brayden Sanders (quarterback).

In the first half, the Hawks offense converted three times on fourth down, the last of which propelled their second scoring drive. Boyle, who picked up hard yards by the bushel, kept Chaska alive by moving the chains to the Hawks’ 45-yard line. Sanders later completed the drive with just 12 seconds remaining before halftime.

Only an interception in the end zone by Armstrong junior Cordell Wilson kept Chaska from scoring on all three of its first half possessions.

Armstrong ran just two plays in the third quarter. Trailing 17-0 in the fourth quarter, the Falcons got on the board with a 38-yard strike from Jamen Malone to Marquan Tucker.

The Falcons recovered their ensuing on-side kick. But the drive ended with Chaska Myles Meiller’s second interception of the night.